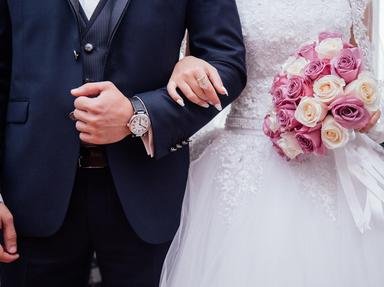 A basic quiz about the traditions, quirks, ups and downs of the great British wedding!

Quiz Answer Key and Fun Facts
1. Before the groom proposes to the bride, it is traditional that he asks for permission to marry the bride. Who should he ask?

In the past, the groom would send members of his family, and even some of his friends to visit the bride and her family, and they would then make known the prospective groom's intentions. These days, some grooms still ask the permission of the bride's father, though it is not seen as a must.
2. A matron of honour is traditionally what?

If the lady in question is not married, the title is usually changed to either maid of honour or chief bridesmaid. Her role involves working closely with the bride and helping to get ready as well as look after all of the other bridesmaids, flower-girls and pageboys.
3. In Britain, the bride and groom can almost organise their entire wedding to be just as they want it, but there is always one major thing which will always be out of their control. What is it?

The British weather is far from ideal, and although almost everyone dreams of being married on a calm, bright, dry day, it is sadly not always possible. The best thing to do is not to let it spoil things for you - you're marrying your favourite person and that is what is important!
4. During the ceremony the couple are traditionally asked to exchange words in which they promise to love and respect each other until the day they are parted by death. What are these words known as?

Many couples, these days, choose to write their own vows rather than recite the traditional ones. It gives the couple a chance to personalise their ceremony and their promises, making it a bit more special for them.
5. A bride's dress has become one of the biggest expenses of the wedding. As well as buying that, there are other accessories to consider such as shoes, a tiara, a veil and something that is hidden for most of the time and traditionally worn around the top of the leg. What do I mean?

In the past, it was believed to be lucky to have a piece of the bride's clothing, so people used to rip bits off the dress - that evolved into a garter being worn and the bride tossing that to the men at the wedding. The equivalent these days is the tossing of the bridal bouquet to the single ladies at the wedding.
6. The sit-down meal traditionally held in the afternoon, after the wedding ceremony, has what name?

Although this meal is usually eaten in the afternoon in Britain, the name apparently arises from the tradition that the bride and bridegroom would have been fasting before the wedding, and so the wedding breakfast would be the time when they would break their fast and have their first meal of their married life together.
7. The speeches are usually made after the sit-down meal. In which order do they come?

The best man's speech is the one everyone is waiting for. Often humorous, it is common for the groom to be humiliated in a light-hearted way by the best man.
8. After the meal and the formalities, the couple may have organised an evening reception, to which even more guests might attend. The newlyweds will dance to a song selected by themselves, but what is this called?

Some couples secretly take dance lessons for this occasion, and there have been instances where newlyweds have organised a special dance routine to a surprise song! Sir Mix-a-lot's 'Baby Got Back' has even been used in the past!
9. After the wedding day the bride and groom may fly off on their holidays together. A romantic destination is often chosen. What is this holiday/vacation called?

The honeymoon is the first chance for the couple to spend some romantic quality time alone together before life settles back into normality. Commonly chosen as destinations are The Maldives, The Seychelles or New Zealand.
10. Who, traditionally, pays for the great British wedding?

Things are changing these days and couples are starting to pay for their own weddings, although parents will often help out financially. Traditionally though, it was the bride's father.
Source: Author HelenCF 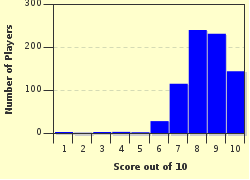 
Other Destinations
Explore Other Quizzes by HelenCF