Welcome to the wonderful world of common bonds. Follow me on a magical trip and see if you arrive at the correct conclusion to a movie based on a literary work.

Quiz Answer Key and Fun Facts
1. What small breed of dog takes its name from an ancient man-made pile of stones, in and around which, it used to dig for rats and other rodents?

The cairn terrier originated in the Scottish Highlands, where it was used to dig among cairns (man made piles of stone)and burrow after small rodents. It is a small,rough haired, hypoallergenic breed and is one of the oldest terrier breeds. It is a very energetic dog, ideally suited to working, as opposed to being a 'lap dog'.
2. In the 1960's television series 'Daktari', who, or what was 'Clarence'?

Clarence was the famous lion, noted for being cross-eyed in the Daktari series, which ran from 1966 to 1969. Marshall Thompson played the veterinarian, Dr Marsh Tracy. The chimpanzee was named Cheetah!
3. What nickname is given to Ireland (both Northern Ireland and the Republic of Ireland)?

Ireland is nicknamed 'The Emerald Isle' due to the lush greenness of its countryside. Northern Ireland is a part of the United Kingdom of Great Britain and Northern Ireland, whilst the Republic of Ireland is totally independent.
4. In the television series 'Charmed' and 'Sabrina' the main characters were portrayed as what?

Both 'Sabrina the Teenage Witch' and 'Charmed' were television series with themes centred around young female witches.
'Sabrina the Teenage Witch' ran from 1996 to 2003 and starred Melissa Joan Hart.
'Charmed' ran from 1998 to 2006 and starred Holly Marie Coombs, Shannon Doherty, Alyssa Milano and Rose McGowan.
Both series were extremely popular.
5. The French know it as jaune, to the Germans it is gelb and the Spanish call it amarillo. What colour is this?

This area, covering the states of Kansas, Texas, Oklahoma, Nebraska and South Dakota, is known as Tornado Alley because of the excessive number of tornadoes seen there.
Tornadoes do happen in other areas of the USA, but they are far more concentrated in this area.
7. What is the name of the American rock band which formed in 1970? They produced such singles as 'Song for America' and 'Carry on Wayward Son'.

Kansas are a popular, five person rock band from Topeka in Kansas. They formed in 1970, and apart from a small hiatus in 1984, continued touring and performing in Europe and North America.
Most of their popular music was produced in the 1970's when they brought out such singles as 'Dust in the Wind', 'Carry on My Wayward Son' and 'Song for America'.
They have never had a No.1 hit, their highest, reaching No.6 on the 'Billboard Hot 100', being 'Dust in the Wind'.
8. This character is the alter-ego of Dr.Jonathan Crane, one of DC Comics super-villains. It is also the nickname of Dr. Christopher Syn, in the novels by Russell Thorndyke. What is the character?

The Scarecrow first appeared in DC Comics 'World Comics No.3' issued in 1941. His real name is Dr Jonathan Crane, a psychologist who is an expert in the psychology of the causes and effects of fear on people.
His character appeared in the 2005 film 'Batman Begins' and was played by Cillian Murphy.
'Dr Christopher Syn' is the vicar of Dymchurch, a small village on the coast of Kent. His alter-ego is a notorious character and leader of a successful band of smugglers, known as 'The Scarecrow'. The series, written in the early part of the 20th century, by actor and author, Russell Thorndyke, follows Dr Syn through the latter half of his life.
9. This name means a 'gift from God' and is of Greek origin. Bea Arthur played this character in 'The Golden Girls', and a well known American poet with the surname Parker had this given first name. What name is it?

Bea Arthur played the part of Dorothy Zbornak, daughter of Sophia and friend and housemate to Rose, in the much loved series, 'The Golden Girls'. Dorothy Parker was well known for her acerbic wit and wrote for magazines such as Vanity Fair. One of her more famous witticisms was 'Beauty is only skin deep, but ugly goes clean to the bone'.
Bonnie Parker was a notorious outlaw, murderess and robber in 1930s America.
She was the female half of 'Bonnie and Clyde'.
10. Now you have all the clues can you tell me what the common bond is?


Answer: The Wizard Of Oz

The common bond was from the film 'The Wizard of Oz' based on the Book by L Frank Baum.
Q1- Cairn Terrier, Dorothy's dog Toto, was a cairn.
Q2- Lion, the Cowardly Lion was one of Dorothy's friends who is looking for courage.
Q3- Emerald, the friends are travelling to the Emerald City to see the Wizard of Oz.
Q4- Witch, there are several witches in Oz. Glinda is the Good Witch from the North who helps Dorothy to overcome the Wicked Witch of the West who wants to kill her.
Q5- Yellow, this is the colour of the Yellow Brick Road along which the friends travel to the Emerald City.
Q6- Tornado Alley, A tornado was the means for Dorothy and Toto being transported to the Land of Oz.
Q7- Kansas, This was the state where Dorothy lived and was transported to the Land of Oz.
Q8- Scarecrow, was another one of Dorothy's friends with whom she travelled, he was looking for a brain.
Q9- Dorothy, was the main character played by Judy Garland.
Source: Author DoveHouse 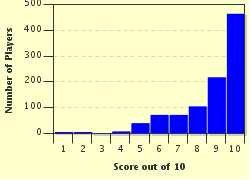