Can You See No Common Bond? Trivia Quiz

Quiz Answer Key and Fun Facts
1. Orange juice, while a commodity, still sees competition among its major players in North America. Which of these companies' products is called "Pure Premium" and led to the Manatee River Packing Company changing its name in 1957?

Manatee River introduced the Tropicana Pure Premium orange juice product in the 1950s. The success of the product led to the company changing its name to Tropicana Products, Inc. Company founder Anthony T. Rossi developed the process of flash pasteurization, which is now widely used for packaged fruit juices.
2. Billy, Dolly, Jeffy and P.J. are the names of the children in a comic strip created by Bil Keane in 1960. Which one is it?

Some of my favourite "Family Circus" cartoons are the ones which show eldest child Billy's activities throughout the day, denoted by a dotted line that tracks around the family's house or neighbourhood.

"Peanuts" (Charles M. Schulz), "Marmaduke" (Brad Anderson) and "Hi and Lois" (Mort Walker) all debuted in the 1950s.
3. I'm thinking of a song that is the theme to a 1977 film directed by Martin Scorsese. Although the original version was sung by Liza Minnelli, most people associate the song with Ol' Blue Eyes, Frank Sinatra. Which song is it that has my toes a-tappin' and my fingers a-snappin'?

I've used the shortened title here to make the answer less obvious, but it ought to have been written as "Theme from 'New York, New York'".

The incorrect answers are all songs from Sinatra's extensive repertoire. "Strangers in the Night" was originally sung by Croatian singer/songwriter Ivo Robic before it was popularized by Sinatra in 1966. "Night and Day" was composed by American songwriter Cole Porter for the musical "Gay Divorce" (1932) and has been covered by many famous artists including Ella Fitzgerald, Ringo Starr and U2. "Fly Me to the Moon" was originally titled "In Other Words" when it was written (by Bart Howard) and performed (by Felicia Sanders) in 1954. Sinatra's popular version was first recorded a decade later.
4. In the movie "Iron Man 2" (2010), Tony Stark first encounters the film's nemesis, Ivan Venko, while participating in the Formula One Monaco Grand Prix. The majority of this race takes place in which ward of the Principality of Monaco?

The incorrect answers are also wards of Monaco; Larvotto and Saint Michel were formerly parts of Monte Carlo, and Saint Roman/La Rousse was formerly part of La Condamine, the other ward in which the race takes place.

Monte Carlo has featured in many films, including "To Catch a Thief" (1954) and the James Bond film "Never Say Never Again" (1983).
5. A Middle-Eastern folk tale tells the story of an impoverished boy who is tricked by an evil sorcerer into retrieving an oil lamp containing a powerful djinni. What was this boy's name?

The stories about Aladdin and Ali Baba are both folk tales from the Middle East which appear in the compendium "One Thousand and One Nights" (or "Arabian Nights" as it is commonly called in English). The compendium is thought to have existed as early as the ninth century CE, although these two stories (among the most famous) were added much later by European translators. Sultan Shahriyar and his new bride Scheherazade are the main characters in the framing story of "One Thousand and One Nights".
6. Which famous adventure novel was subtitled "The Mutiny of the Hispaniola" and attributed to Captain George North when it was first published in "Young Folks" magazine in 1881?

"Treasure Island" is told mainly from the point of view of Jim Hawkins, a young boy who discovers a treasure map and goes to sea to follow it. The journey, however, is fraught with pirates, mutiny, island castaways and adventure! The story was parodied by Disney in 1996 with "Muppet Treasure Island", which starred Kevin Bishop as Jim Hawkins, Tim Curry as the pirate, Long John Silver, and Kermit the Frog (voice talent of Steve Whitmire) as Captain Smollett.

"Robinson Crusoe" and "The Swiss Family Robinson" both feature the lives of castaways and were published in 1719 and 1812 respectively. "The Mutiny of the Bounty" was published in 1932 and is a semi-fictional story about the mutiny against Captain William Bligh in 1789.
7. Which film company's productions include memorable classics like "Ben-Hur" (1925), "The Wizard of Oz" (1939) and "Gone with the Wind" (1939), and was one of the first companies to experiment with Technicolor production in the Golden Age of Hollywood?

MGM was formed in 1924 with the joining together of Metro Pictures, Goldwyn Pictures Corporation and Louis B. Mayer Pictures under the control of Marcus Loew. The four companies which form the answer set to this question, together with The Fox Film Corporation, were considered the "Big Five" of Hollywood movie studios during the Golden Age (1920s - 1950s).
8. One of my favourite movies of all time is 1975's "Monty Python and the Holy Grail". In an early scene 37-year-old Dennis (who is not a woman) expresses his disbelief regarding how Arthur Pendragon became king: "Listen, strange women lyin' in ponds distributin' swords is no basis for a system of government. Supreme executive power derives from a mandate from the masses, not from some farcical aquatic ceremony." What is the name of Arthur's sword, given to him by the Lady of the Lake, "her arm clad in the purest shimmering samite"?

In other versions of the tale, Arthur pulls Excalibur from a stone to win his kingship. The incorrect answers are other famous weapons from mythology and fiction: Gungnir is the spear of the Norse god Odin, Rhindon is High King Peter's sword (from "Chronicles of Narnia") and Glamdring is Gandalf's sword (from "The Lord of the Rings").
9. Brandon Flowers, frontman for the musical group The Killers, released his first solo album in September 2010. The first single was "Crossfire". What was the name of the album?

Like the common bond of this quiz, Brandon Flowers is from Las Vegas, Nevada, in the United States. "Flamingo" refers to the street in Las Vegas where Flowers had his first job and where he met his wife, Tana. In the UK, "Flamingo" debuted and spent one week as #1 on the UK Albums Chart.
10. Which type of salad is traditionally made with romaine lettuce and dressed with Worcestershire sauce, lemon juice, egg, olive oil, croűtons and black pepper?

The creation of the Caesar salad is generally attributed to Caesar Cardini, an Italian-born Mexican restaurateur and hotelier with properties in San Diego and Tijuana. According to Rosa Cardini, her father invented the salad on 4 July 1924 when an exceptionally busy night forced Caesar to improvise a salad using leftover ingredients that were on hand in the kitchen.
11. Window blinds have been used since the time of Ancient Egypt, where reeds were used to block the strong heat from the sun. Which of these is a popular form of window blind, named for a city in Italy?

Venetian blinds are actually a type of Persian blind. Venetian traders brought them back to Venice and Paris from the Middle East, and they were popularized in Western culture with the Venetian appellation. Bologna is another Italian city, and Tuscany is a region in central Italy.
12. It is a hot, sunny day and I'm driving down the highway to my friend's house. On the road ahead it looks like there are puddles of water, but they disappear as I get closer. What have I just seen?

A mirage is a type of optical phenomenon; unlike hallucinations, it can be caught on film, and as you can see its occurrence is not limited to desert oases! These types of mirages (called "inferior mirages" because they occur below the real object being seen) happen because the air near the asphalt is significantly hotter than the air above it, causing the rays of light to bend. "The result is that an 'inferior image' of the sky above appears on the ground.

The viewer may incorrectly interpret this sight as water which is reflecting the sky, which is, to the brain, a more reasonable and common occurrence." (Wikipedia)
13. Complete this verse by Rudyard Kipling. (Hint: The missing word is also the poem's title.) "By the old Moulmein Pagoda, lookin' eastward to the sea, There's a Burma girl a-settin', and I know she thinks o' me; For the wind is in the palm-trees, and the temple-bells they say: 'Come you back, you British soldier; come you back to ________!'"

"Mandalay" was first published in 1892, and refers to the capital of Burma as it was during British colonization from 1886 to 1948. Yangon (Rangoon) then became the country's capital until it was moved again, to Naypyidaw, in November 2005.

Fotheringhay is a village in Northamptonshire, England, and was the home of the Royal House of York. Hanalei is a village in Hawai'i, and Hudson Bay is a huge (827,000 km2), saltwater bay: imminently recognizable on any map of Canada.
14. What was the name of the second son of King Priam, whose elopement with the Queen of Sparta sparked a war between the two kingdoms?

In Greek mythology, Paris was asked to settle a dispute between Hera, Athena and Aphrodite over which goddess was the most lovely. Each goddess offered him a gift if he should choose her; Aphrodite's gift was the affection of the most beautiful woman in the world: Helen of Sparta. Unfortunately King Menelaus of Sparta took exception when Paris eloped with his wife to Troy, and enlisted the help of his brother, Agamemnon, to attack the Trojans.

Hector was the eldest son of King Priam and Queen Hecuba.
15. The 14 preceding clues in this quiz should suggest a type of establishment. What is it? 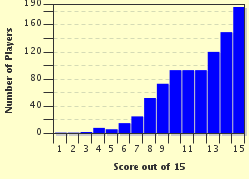 
Other Destinations
Explore Other Quizzes by LadyCaitriona