This bond is a popular Australian song made famous throughout the world in the 1960s.

Quiz Answer Key and Fun Facts
1. What is the Australian term used to describe one who works with or is experienced with cattle?

The Australian stockman has been part of the rural and outback landscape since the early 1800s and in 1988 the Australian Stockmans Hall of Fame was opened in Longreach, Qld as a tribute to these pioneers.

A shepherd looks after sheep and cowboy and rancher are American terms.
2. Arguably there are four strong countries in the southern hemisphere that compete in international rugby tournaments. What is the unofficial name of the Australian team?

Rugby union was first played in Australia between visiting English ships and the army possibly as early as 1820. A representative side from Queensland combined with that of New South Wales to play the first test against the British Isles in 1899 on home soil and in 1908 when Australia travelled to Britain they adopted the name of 'The Wallabies'. The All Blacks (New Zealand), the Springboks (South Africa) and Los Pumas (Argentina) have all earned themselves a place in the top three of the World Cup since its inception in 1987.

The Springboks however did not compete until 1995 due to anti-apartheid sporting boycotts.
3. Major Mitchell's, Sulphur Crested and Gang Gang are all types of what bird?

There are 21 breeds of cockatoo of which 11 can be found exclusively in Australia. The balance are located in parts of New Guinea and Indonesia. One thing that they all possess is a loud squawk with virtually no melodic notes at all. In most cases cockies will keep the same partner for many years and will also have a tendency to return to the same breeding areas.
4. Perhaps best known for her appearance in 'Grease' (1978) and for hits such as 'Physical' and 'I Honestly Love You', Olivia Newton-John formed a company with friend Pat Farrar in 1984. The company set up a chain of women's clothing boutiques however it failed in 1992. What was the name of that company?

Although the business went into bankruptcy the name "Koala Blue" is the brand name for some Australian wines, mineral water and confectionery which is held under licence by Olivia and Pat.
Olivia has also been heavily involved in promoting breast cancer awareness after being diagnosed in 1992.
5. Monotremes are egg laying mammals. There are only two types of animals, the platypus and the echidna. They are indigenous to Australia although three species of echidna have been located in New Guinea and are listed as CR on the endangered species rating. As part of its protection one of the monotremes has a poisonous spur located on its rear hind leg. Can you identify which one?

The platypus is a very strange animal to view. It has a tail resembling a beaver, four feet resembling an otter and a leathery looking flat bill which has holes for breathing. The average length for a female is 43 cm and males 50 cm. The term duck-billed platypus is a misnomer really because there is no other variety of platypus thereby rendering the 'duck-billed' superfluous.

Seeing as it is only found in Australia it has special status for the country. It is depicted on the 20c coin and is the state animal emblem of New South Wales.
6. There are a number of woodwind instruments that are played in a circular breathing style. Circular breathing is where you breathe in through the nose and breathe out through the mouth both at the same time. Which of the following instruments is indigenous to Australia?

The didgeridoo is a traditional Aboriginal musical instrument and it is believed to have been around for at least 2,000 years having been seen in cave paintings of aboriginal celebrations particularly in northern Australia. It is a long tube of mallee eucalypt timber having been hollowed out by termites and then painted with the stories and colours of various tribes.

The pitch of the didge is determined by the length so the longer it is the deeper it will sound. The launeddas comes from Sardinia, the aulos from Greece and the mijwiz from Syria.
7. Who was Clint Eastwood always telling to "Right turn" in the "Every Which Way but Loose" series of films?

Clyde was a lovable orangutan who had the most disgusting habits as can be demonstrated from this quote by Philo Beddoe (Clint Eastwood) who was about to meet Lynn Halsey-Taylor (the potential girlfriend).
"All right Clyde, you're gonna meet a lady now, understand? I want you to handle it. That means no spittin', pissin', fartin', or pickin' your ass! You hear me?"
8. When you are naked what are you said to be in?

'In the altogether' is an idiomatic alternative phrasing for completely unclothed. Other terminology includes 'in the buff', 'buff naked', 'in the raw', 'naked as a jaybird'. It is believed that its origin is Middle English (from al togeder : al, all; + togeder, together).
9. What is the surname shared by Emmy-Lou, Richard, and Thomas? It is also the name of a popular Scottish tweed.

Emmy-Lou Harris is an internationally renowned singer in many genres who first came onto the music scene in the early 1970s.
Richard Harris was an accomplished actor whose roles included Albus Dumbledore (Harry Potter movies), The Field, The Wild Geese, Camelot and others. He passed away in 2002 of Hodgkin's Lymphoma.
Thomas Harris is the author of the Hannibal Lecter books and surprisingly very few photographs have been published. In the course of researching this question I could not find more than a few photos of him.
Harris tweed is a popular winter fabric originally made in the islands of far north Scotland. Handwoven wool with flecks of colour from vegetable dyes it has come to symbolise quality and an Act of Parliament ensures that its trademark can only be used for the fabric if it is made in the Outer Hebrides.
10. Can you put together the clues to come up with the answer?


Answer: Tie Me Kangaroo Down Sport

Tie Me Kangaroo Down Sport was a famous Australian song performed by Rolf HARRIS (Q9)
[Spoken:]
There's an old Australian STOCKMAN (Q1), lying, dying,
and he gets himself up on one elbow,
and he turns to his mates,
who are gathered 'round him and he says: 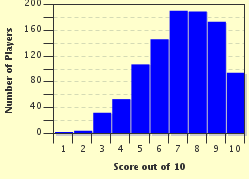 
Other Destinations
Explore Other Quizzes by Exit10