The answers to the first nine questions will suggest the answer to the tenth, which is in the realm of sport.

Quiz Answer Key and Fun Facts
1. During the Battle of Monmouth (New Jersey) in 1778, Mary Ludwig Hays earned a different name for herself. What was that name?

As was common during the American Revolutionary War, and other wars of that era, soldiers' wives became camp followers and during battle would perform various duties. By carrying water to the troops in the heat of battle, this soldier's wife earned herself the nickname "Molly Pitcher", for the vessel in which she carried the water.

She further distinguished herself by taking her husband's place loading a cannon after he was taken off the field, injured or exhausted.
2. Which novel about a prep school student was written by J.D. Salinger?


Answer: The Catcher in the Rye

Narrated by sixteen-year-old Holden Caulfield, "The Catcher in the Rye" is beloved by many of my generation, who identified with the angst-ridden teen. Personally I found him whiny and unattractive, but I'm resigned to being in the minority.

The incorrect choices are by Joseph Heller ("22" and "Gold") and Pierre Salinger ("Kennedy").
3. In which lower Manhattan park is Castle Clinton National Monument located?

Before it was a park, The Battery was the site of an artillery emplacement, and part of the earliest settlement in what would become New York City. Castle Clinton, originally offshore and called the West Battery, was a circular fort built to defend the city during the War of 1812. Landfill expanded the area of the park, and by the mid-nineteenth century Castle Clinton was a major landmark therein.
4. What word can mean a layer of the interior of a planet, a cape-like garment or part of a British fireplace?

Earth's mantle is a rocky, mostly solid layer between the crust and the outer core of the interior of the planet. As a garment, a mantle is usually a cape or shawl worn by women. As with word pairs like theater/theatre or center/centre, British English prefers the variant mantle to mantel to describe the shelf above a fireplace.
5. One of only two women to have a book of the Bible named for her, she was the great-grandmother of King David. Who is she?

Ruth had married into a Hebrew family, but was left a widow, though she stayed with her mother-in-law, Naomi, after that happened. She later married Boaz and their son Obed was the grandfather of David.

The other woman to have a book of the Bible in her name was Esther. Orpah was Ruth's sister-in-law who chose not to stay with Naomi after her own husband's death.
6. Although she was never seen, her presence was often felt. What was the name of Niles Crane's first wife on the TV series "Frasier"?

Fragile, frail and vindictive Maris Crane is Frasier's brother Niles' wife for the first several years of the series. Even after separating Niles felt drawn back to her in some mysterious way, but finally made the break. He married Mel briefly when his true love Daphne seemed on the brink of marrying another man, but eventually Niles and Daphne became a couple. Roz was Frasier's producer, who pretended to be Maris in the episode "The Two Mrs Cranes".
7. In his histories of the prisoner of war camp at Colditz castle, what sporting term does P.R. "Pat" Reid use to describe a successful escape?

A home run meant actually getting safely away from German-occupied territory. Reid himself made a home run in 1942, and other successful escapers included Airey Neave, who reached England and joined MI9. Years later, as a member of parliament and colleague of Margaret Thatcher, Neave was assassinated by the INLA (an Irish paramilitary group) by a bomb placed under his car.
8. According to Douglas Adams, what is the answer to "life, the universe and everything"?

While love and compassion might go along way to solving the problems of life, Adams' answer to the question is simply "42". Although Adams stated in later interviews that the whole thing was a joke, and he had chosen the number randomly to include in "The Hitchhiker's Guide to the Galaxy", efforts persist to decipher the significance of the number.

Some of the notable occurrences of the number cited include the age at which Prince Albert died, the page on which Harry Potter discovered he was a wizard and the number of laws in cricket!
9. Carol Channing, Marilyn Monroe and Emmylou Harris all have claimed musically that these are a "girl's best friend". What would that be?

"A kiss on the hand may be quite continental, But diamonds are a girl's best friend..." or so sang the ladies mentioned, to name a few. Marilyn performed the song as part of the 1953 movie "Gentlemen Prefer Blondes" after Channing had introduced it on Broadway in the play of the same name a few years earlier.

The version performed by Satine (Nicole Kidman) in "Moulin Rouge!" (2001) changed some of the lyrics.
10. The answers of the first nine questions, as well as the title of the quiz, should make you think of one particular sport? Which sport?

"Play ball!" is the traditional umpire's call to begin a game of baseball, hinted at by the title of this quiz.

Of the nine players on the field for a team, the most important may be the pitcher (Q1) who delivers the ball to the catcher (Q2) in an attempt to retire the batter. Together the pitcher and catcher form the battery (Q3). The playing field is known as a diamond (Q9).

Jackie Robinson broke major league baseball's colour barrier wearing the uniform number 42 (Q8) for the Brooklyn Dodgers in 1947. A movie about his life is titled "42" and the number is retired by all MLB teams.
Source: Author spanishliz 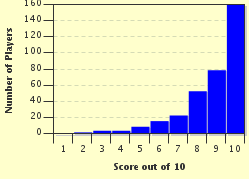