Take a walk with me through 10 different trivia categories, to see how much you know about some famous female firsts.

Quiz Answer Key and Fun Facts
1. Famous female firsts in history: China had a female emperor (or more accurately, an empress) at one stage. Which dynasty did this take place in?

Empress Wu Zetian was declared emperor of China when her youngest son stepped down from the position in about 690 AD. Wu was married to Kao Tsung, who suffered a stroke, allowing her to learn much about the administration of the court. She is thought of by historians as an effective emperor, whose main change was increasing the profile of Buddhism in China, as well as campaigning for the rights of women in the country.

In 705 she relinquished the throne to her son due to political pressure.
2. Famous female firsts in sport: in 1900, Charlotte Cooper became the first woman to win gold at the Olympics. In which sport did she achieve this accomplishment?

Charlotte Cooper represented Britain at the 1900 Olympic Games in Paris, France. This was the first modern Olympic Games where women participated (Athens in 1896 was open to males only). She not only took the gold medal for the singles tournament, but also won the mixed doubles with her partner Reginald Dougherty. Cooper had a very successful tennis career, making eight consecutive singles finals at Wimbledon (a record that was held until 1990) and winning five of them.
3. Famous female firsts in music: in 1995, which artist made music history by becoming the first female artist to have a single debut at number one on the US charts?

Carey is well known for her incredible vocal range of 5 octaves, and in particular her ability to hit very high notes (almost reaching the top of a standard piano keyboard). The song that made history for the already very successful singer was "Fantasy", from her "Daydream" album.
4. Famous female firsts in movies: Kathryn Bigelow won an Academy Award in 2009 for directing the film "The Hurt Locker". Was she also the first woman to be nominated for this award?

There were in fact three women nominated for Best Director Oscars prior to Bigelow. The first was Lina Wertmüller for the film "Seven Beauties" (1976); then there were no female nominees for another 17 years until Jane Campion was nominated for "The Piano" (1993). A decade later, Sofia Coppola was nominated for "Lost in Translation" (2003).
5. Famous female firsts in television: Lucille Ball was famous for having her own TV show. But what major accomplishment did she also achieve that etched her into TV history?

The show "I Love Lucy" broke new ground in may ways. It was the first show to be filmed before a live audience, and also the first to feature an interracial couple. Lucille Ball was also the first woman to be on a TV show regularly while pregnant. The success of the show enabled Lucille to start up her own movie studio in 1962, called Desilu.
6. Famous female firsts in world: German aviator Hanna Reitsch accomplished many firsts. Which of these was NOT one of them?

Despite her father's ambitions for her to become a doctor, Reitsch began flying gliders at the age of 20 and fell in love with all aspects of aviation. Her other notable achievements include being the only woman awarded the Iron Cross First Class during World War II; the first woman to be promoted to flight captain; and the first person to fly a helicopter indoors.
7. Famous female firsts in religion: Mary Baker Eddy is famous for accomplishing what feat that no woman before her had?

Mary Baker Eddy founded the Christian Science movement in the 1870s. She has been quoted as saying her inspiration for founding the movement, which she described as embodying "divine laws of Life, Truth, and Love", came to her when she recovered (some say miraculously) from a spinal injury. She believed that her healing was divinely influenced.
8. Famous female firsts in science/technology: the first female to go into space was the same nationality as the first man in space. What nationality were they both?

The first man in space was Soviet cosmonaut Yuri Gagarin (April 12, 1961). Valentina Vladimirovna "Valya" Tereshkova was inspired by Gagarin's feat and immediately signed up to the cosmonaut program. She launched as part of the Vostok 6 mission on 16 June, 1963, and spent 70 hours in space, making 48 orbits of the earth.

Her flight narrowly avoided tragedy when she realised that the navigational systems required last-minute changes to enable a safe re-entry to earth. This was her first and only space flight.
9. Famous female firsts in humanities: who was the first woman in Greek mythology, formed out of clay and later creating some havoc when releasing evil spirits, leaving only hope behind?

Pandora, whose name means "all-gifted" was said to possess the beauty of Aphrodite and the boldness and cunning of Hermes. The younger brother of Prometheus, Epimetheus, was given Pandora as his bride. But when she entered his house, Pandora opened a storage jar (not actually a box as the story often goes) and released evil spirits into the world.
10. Famous female firsts in video games: all of the following were arcade games featuring female protagonists. But which was the first?

Ms. Pac-Man (1982) beat out Metroid (1986), Resident Evil (1996) and Tomb Raider (also 1996). In terms of sales of its arcade consoles, Ms. Pac-Man was actually more successful than Pac-Man (launched in 1980) which it originated from. Apart from the new character, Ms. Pac-Man also featured four different maze types (as opposed to just one), a range of new music, a different name for the orange ghost (also a female, named Sue) and probably most innovatively, a more difficult and unpredictable, semi-random movement pattern among the ghosts (making the game much more challenging).
Source: Author timence 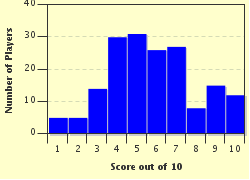 
Other Destinations
Explore Other Quizzes by timence