This quiz asks you to identify newsworthy items of that explosive decade, the 1960s, such as inventions, cultural icons, and events. Enjoy your trip down memory lane. I enjoyed this second trip too.

Quiz Answer Key and Fun Facts
1. What first occurred on a Pan-Am flight in 1962?

Pan-American World Airways (Pan-Am) installed the monitors in the first class section of their Lockheed 1011 aircraft.

The first ever film shown on a commercial flight was "Howdy Chicago" in 1921, shown by Aeromarine Airways on an amphibious flight near Chicago.
2. What country tested its first hydrogen bomb in 1967?

China tested what they called Test No. 6 in the western part of China on June 11, 1967. The yield of this explosion was 3.3 megatons. The People's Republic of China had tested its first nuclear device earlier in 1964 to the surprise of many around the world.
3. What health warning was first put on cigarettes in the United States in 1966?


Answer: "Caution! Cigarette smoking may be hazardous to your health"

Multiple scientists quickly said this statement as phrased is one of the biggest understatements in history since the damages of cigarette smoking are conclusively linked to death by cancer, heart disease and responsible for perhaps as many as one in five deaths.

Dr. Gro Harlem Brundtlandl, the Director-General of the World Health Organization" from 1998-2003, said that "A cigarette is the only consumer product which when used as directed kills its consumer."

These early Touch-Tone sets had merely 10 keys initially. It took until 1968 to add the * and the # keys on certain models.
Note: Touch-Tone phones were first used in 1941 and were later presented at the Seattle World Fair in 1962. It was not until 1963 that they became generally accessible to the public.
5. Which Boeing aircraft made its initial flight on February 9, 1969?

The first plane appeared on September 30, 1968. The plane was enormously expensive, the first plane costing more than $1 billion dollars in addition to the cost of the plant needed to build it. The first flight occurred on February 9, 1969.

The plant needed to build this aircraft was big enough to enclose at least 43 football fields. It appears that its production cost daily at least $6 million dollars.

Early riders of this the 747 were amazed by its size, layers, opulence and cruising altitude.
6. 1961 marked the year of the first human in space? Who is it?

Yuri Gagarin was, it seems, a man of good heart, ample good cheer and an amazing optimism about space exploration. He died in a plane crash at the young age of 34 on March 27, 1968.
7. Which of the following events does NOT happen in 1968?


Answer: breakup of the Beatles

"Hair," subtitled "The American Tribal Love-Rock Musical", opened on Broadway in 1968. The Beatles split up in 1970. Don Hewitt created "60 Minutes", which has appeared on CBS since 1968.

1968 was also the year of the assassination of Martin Luther King, Jr. and Robert Kennedy.
1968 was the year of the release of "Hey Jude."
8. What ground-breaking original series created by Gene Roddenberry aired for the first time on TV in 1966?

The original series ran from September 8, 1966 to September 2, 1969. The initial viewer response was tepid. In fact, there were thoughts of canceling the show in its first season. Word has it that Lucille Ball steadfastly defended the show.
9. What famous show for children, and known for its muppets, aired first in 1969?

In 1996, a survey found that more than 90% of American children had watched this show before they were three years old.

Source: Shalom M. Fisch and Rosemarie T. Truglio, eds. ""G" is for growing: Thirty years of research on children and Sesame Street," p. xvi.
10. In February, 1960, which coach became the coach of the expansion team, the Dallas Cowboys?

Tom Landry, one of the most illustrious coaches ever, coached the Dallas Cowboys from 1960 to 1988. He had five NFC Championship Victories. As a player, he had been a cornerback.
Source: Author Windswept 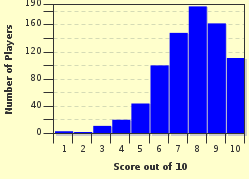 
Other Destinations
Explore Other Quizzes by Windswept