1968 is a year full of important events in history. See how much do you know about them.

Quiz Answer Key and Fun Facts
1. The Prague Spring happened in 1968. Who was the leader of the Communist Party of Czechoslovakia during the Prague Spring?

The Prague Spring was very important a period of liberalization, which continued until USSR along with Bulgaria, the then East Germany, Hungary and Poland, all members of the Warsaw Pact, invaded Czechoslovakia. The Prague Spring is associated with the slogan 'socialism with a human face'.
2. The Tet Offensive in Vietnam began on January 31st, 1968. Who attacked whom in this offense?


Answer: The Viet Cong attacked Republic of Vietnam and their allies

The offensive is know as the Tet Offensive because of the day it started - the first day of the year in the traditional Vietnamese lunar calendar. In this offensive the Viet Cong attacked Republic of Vietnam and their allies with the main goal to strike military and civilian control centers in South Vietnam. The offensive was a military defeat for the Communists in the end.
3. "We don't want a world where the guarantee of not dying of starvation brings the risk of dying of boredom". This was a slogan used during which memorable events in 1968?


Answer: The May 1968 protests in France

The May 1968 protests in May are one of the largest students' protest. Technically it began when the authorities closed the University of Paris at Nanterre. This has been preceeded by months of conflicts involving students and authorities.
4. The Winter Olympic games in 1968 were held in:

These are the Xth Olympic Winter Games. They were held between February 6th and February 18th.
5. How do you write 1968 using Roman numbers?

Launched on October 11th, 1968 this was the first manned Apollo mission. The first live television broadcasting was made by this mission.
7. Which of these companies was founded in 1968?

Intel is known as the largest semiconductor chip producer. It was founded on July 18th as Integrated Electronics Corporation by Gordon E. Moore and Robert Noyce.
8. April 4th, Lorraine Motel in Memphis, Tennessee. This famous man was shot dead on this date. Who was he?

The leader of the African-American civil rights movement was shot by James Earl Ray. This caused major protests in several American cities.
9. Which team won the European football (soccer) cup in 1968?

By doing so Manchester United became the first English team to win the trophy.
10. Which famous musical opened officially on Broadway in April 1968?

The musical with lyrics by James Rado and Gerome Ragni and music by Galt MacDermot debuted on Broadway in 1967 and was officially opened in 1968.
Source: Author ivailo 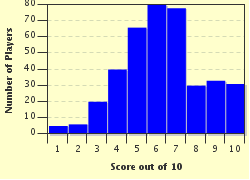 
Other Destinations
Explore Other Quizzes by ivailo