Yet another in the series, this quiz covers the decade of the 1960's. One question per year. Good Luck!

Quiz Answer Key and Fun Facts
1. In 1961, a passenger on a National Airlines flight threatened the crew and passengers with a knife and gun in the first successful skyjacking. To what country was the plane forced to fly?

A Cuban using the name 'The Pirate Cofresi' skyjacked a flight from Miami to Key West and demanded to be taken to Havana.
2. What city became the first known city to have a population over 10 million in 1962?

Chancellor Konrad Adenauer resigned after guiding his nation's recovery from WWII.
4. In 1964, after 10 years as premier and Soviet Communist Party chief, Nikita Khrushchev was ousted. Who followed Khrushchev as Soviet premier?

3,500 Marines were sent to protect the air base at Danang.
6. Who founded the League of Spiritual Discovery (LSD) in 1966?

Leary, a former Harvard professor, founded the League based on the 'sacramental' use of LSD, peyote, and marijuana.
7. Who performed the first heart transplant in 1967?

The surgery was performed in Cape Town, South Africa on Louis Washkansky, who died 18 days later from a lung infection.
8. This U.S. Navy ship and its crew were seized by North Korea in 1968.

The ship was seized for allegedly violating North Korea's 12 mile limit. The ship and crew were held for 11 months before being released.
9. 'Oh, Calcutta!', a revue featuring frontal nudity opened in 1969.

It caused quite a stir!
10. What South American country democratically elected the first Marxist head of government in the Western Hemisphere in 1970?

Salvador Allende was sworn in as president of Chile and immediately established diplomatic relations with Cuba. Then he was ousted with CIA backing.
Source: Author sportcon 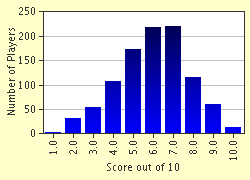 
Other Destinations
Explore Other Quizzes by sportcon