So much happened in the early 1960s. This quiz tries to pull some of that together. The questions are mostly general knowledge about the people, politics, music, and events that influenced the latter half of the 60s and changed America forever. Have fun!

Quiz Answer Key and Fun Facts
1. Whose assassination marked what some historians call a turning point in American History from idealism to cynicism in the way Americans viewed their government and country?

Eisenhower sent the first advisors over in the late 50s, but he was President until 1961.
3. Lyndon Johnson declared a war on what in a famous speech in the mid-sixties?

4. Lyndon Johnson's domestic spending program that established numerous programs for the poor was nicknamed what?

5. Whose arrival in the United States in February of 1964 sparked what was called "The British Invasion"?

6. Who appointed the Warren Commission?

The Warren Commission was headed by Chief Justice Earl Warren and included Senators Richard Russell of Georgia and John Cooper of Kentucky; Representatives Hale Boggs of Louisiana and Gerald Ford of Michigan; and Allen Dulles and John J. McLoy of the CIA.
7. According to the Warren Commission, who was the lone assassin of president John F. Kennedy?

There are many people who say that the Warren Commission was part of a conspiracy to hide the truth about the JFK assassination.
8. What popular female folk singer marched with Martin Luther King Jr.?


Answer: Splendor in the Grass 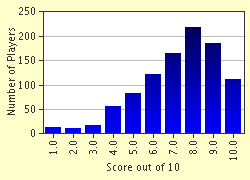 
Other Destinations
Explore Other Quizzes by Jendy