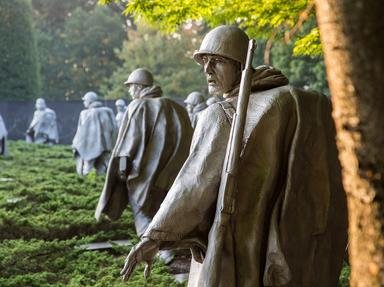 Lest we forget ... Those who cannot remember the past are condemned to repeat it ...

Quiz Answer Key and Fun Facts
1. On what date did the Korean War officially start?

North Korean ground forces crossed the 38th Parallel into South Korea about 4:30 a.m. on June 25, 1950.
2. On 11 April 1951, who replaced General Douglas MacArthur after he was dismissed, As Commander in Chief United Nations Command (CICUNC) in South Korea?

General Douglas MacArthur's dismissal resulted from his rejection of President Truman's policies.
3. In Which Korean Town were the First Peace talks held, between the UN Allies and the Communists?

The First Peace Talks were held at Kaesong on July 10,1952. The Communists broke off talks on August 23, 1952. Peace Talks resumed at Panmunjom on October 25,1952.
4. What was the Operational code-name for the Invasion at Inchon?

Operation Chromite, The Invasion of Inchon began at 6:25 a.m. on September 15,1950
5. Which was the first U.S. Army Infantry Division to see Combat in the Korean War?

On 2 July 1950, 'Task Force Smith' elements of the 24th Infantry Division, were the first to arrive in Korea, were they fought a delaying action against overwhelming odds.
6. Which was the first U.S. Field Army to see Combat in the Korean War?

Lt. General Walton H. Walker was killed when a truck hit his jeep on 23 December 1950.
8. Which U.S. soldier was the highest ranking officer captured by North Korean troops?

Major General William F. Dean was captured by North Korean troops in the Battle of Taejon on 22 July 1950.
9. Which is the Operational code-name for the first prisoner of war exchange, between UN Allies and the Communist?

Operation Little Switch, occurred on April 20 to 26,1953. About 8,000 sick and wounded prisoners were exchanged.
10. On what date did fighting in the Korean War end? 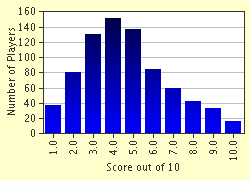 
Other Destinations
Explore Other Quizzes by Regor