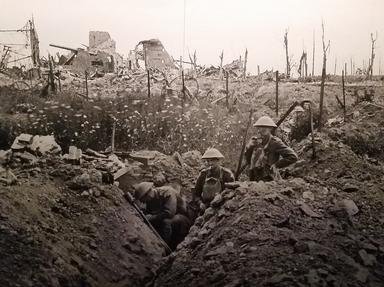 The Last of the Anzacs Trivia Quiz

The word Anzac is short for Australian and New Zealand Army Corps. The true Anzacs were those men, and boys, who fought on the beaches of Gallipoli (Turkey) in 1915. This is a quiz about the last of the original Anzacs.

Share on Facebook
Share on Twitter
Share by E-Mail
Author
Kuu
Time
4 mins
Type
Multiple Choice
Quiz #
80,142
Updated
Dec 03 21
# Qns
10
Difficulty
Tough
Avg Score
5 / 10
Plays
1018
This quiz has 2 formats: you can play it as a or as shown below.
Scroll down to the bottom for the answer key.

Quiz Answer Key and Fun Facts
1. What was the last Anzac's name?

Alec William Campbell was born in Launceston, Tasmania on February 26, 1899. His father was a commercial traveller.
2. How old was Alec when he enlisted in the Army?

Alec lied about his age when he enlisted. He gave his age as 18, not 16. His mother was heartbroken when he joined up as her brother's only son had already died at Gallipoli. His father was so upset that he refused to go to the docks to see his son off.
3. What did the other soldiers call Alec?

Realising how young he really was, the older soldiers tried to protect Alec as best they could.
4. The Anzacs first landed at Gallipoli on April 25, 1915. Alec wasn't among the original Anzacs that landed that day. He didn't arrive until later in the year. Of the men that arrived on that first day of the campaign who was the last survivor?

Ted died in 1997 aged 101. Ted served at Gallipoli until he was evacuated on 19 December 1915. April 25 is Anzac Day in Australia and New Zealand and it is a public holiday. Alec took part in the 2002 Anzac parade three weeks before his death.
5. In what month, in 1915, did Alec arrive at Gallipoli?

Alec was only at Gallipoli a few weeks. One of his jobs was to haul water up to the trenches. It didn't take long for him to come very ill with influenza and the extreme cold. After evacuation he came down with the mumps. His illness brought on Bell's Palsy and one side of his face was paralysed for the rest of his life.
6. After Gallipoli Alec returned to Australia. He was to be married twice. What were his wives' names?


Answer: Both were called Kathleen

This was in 1990. Alec went off, by himself, to find the trench he had occupied all those years ago. While looking for it Alec managed to fall into a hole. As an army officer pulled him out Alec declared he had found his long-lost trench.
8. When did Alec die?

Alec was surprised when he was told he was the last surviving Gallipoli veteran. He said 'All those young men gone.'
9. Alec was the last Anzac but other nations (including France, Britain, Canada and of course Turkey) took part in the Gallipoli campaign. How many Gallipoli veterans were alive when Alec died?

A 21 gun salute is usually reserved for royalty and heads of state.
Source: Author Kuu


Other Destinations
Explore Other Quizzes by Kuu

Go to World War I Quizzes