Who or What Came First? Trivia Quiz

Each question will have four possible answers: a person, a historical event, an item, and a book. Your challenge is to determine what happened first: the person was born, the event occurred, the item was invented, or the book was published.

Share on Facebook
Share on Twitter
Share by E-Mail
Author
masterkahuna
Time
6 mins
Type
Multiple Choice
Quiz #
177,965
Updated
Dec 03 21
# Qns
10
Difficulty
Very Difficult
Avg Score
3 / 10
Plays
3057
This quiz has 2 formats: you can play it as a or as shown below.
Scroll down to the bottom for the answer key.

Quiz Answer Key and Fun Facts
1. Who or what came first?

The cotton gin was invented by Eli Whitney in 1793. The Louisiana Purchase took place in 1803. Abraham Lincoln was born in 1809. "Pride and Prejudice" was published in 1813.
7. Who or what came first?

This quiz was reviewed by FunTrivia editor bloomsby before going online.
Any errors found in FunTrivia content are routinely corrected through our feedback system.
Most Recent Scores
Jan 12 2023 : Strike121: 2/10
Dec 12 2022 : Guest 146: 3/10 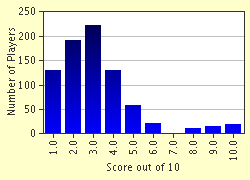 
Other Destinations
Explore Other Quizzes by masterkahuna