A Taste of England [4] Trivia Quiz

Let me tempt your tastebuds by taking a look at English chocolates and sweets.

Quiz Answer Key and Fun Facts
1. This British company, formed in 1911, currently has 379 stores nationwide. Its range of chocolate includes Alpini, Lemon Meringue, Mousse au Chocolat and Viennese Truffle. What is the name of this chocolatier?

Joseph William Thornton set up his first confectionery shop in Sheffield. The family plays an active role in the company even today. They are known for selling premium quality chocolates, toffee and fudge, using their own special recipes. They are very popular at Christmas, Easter and Valentine's Day, when they have on offer a tempting range of boxed gift sets.
2. This sweet has a yellow tube with bright red writing. With it you get a stick of liquorice which you dip inside the tube, coating the stick with a white powdery looking substance. Once placed in the mouth, it creates an explosive sensation of sheer fizziness. What is the name of this classic favourite?

The original packaging for this favourite sweet was made of paper, but it has recently undergone a facelift and now consists of a plastic tube. The top of the liquorice can be cut off and used as a straw to suck up the sherbet. Other people prefer to dip their liquorice inside the tube and suck off the sherbet. Either way, the combination of liquorice and sherbet reacts against each other inside the mouth.
3. These small round jelly sweets are made by Rowntree and have a sugar coating. They are available in five flavours: lemon, lime, strawberry, blackcurrant and orange. What is the name of this fruity chew?

Joseph Rowntree started working in his brother's factory in 1869. The factory was called Cocoa, Chocolate & Chicory Works and was based in Yorkshire. It initially started with 30 employees but soon grew rapidly to 4,000 employees by the end of the century. Fruit Pastilles were first made in 1881. They are normally sold in tubes but can also be sold in packets.
4. This throat lozenge contains menthol and eucalyptus oil and is a popular choice to see people through the winter months. It was marketed through a memorable TV advert showing a poorly male at a train station asking for a "First class dicket de Dottighab". What is the name of this cough sweet?

Tunes were first introduced in 1952 by The Wrigley Company. The flavours today come in cherry, strawberry and blackcurrant. In the TV advert, a man with a blocked nose was trying to buy a train ticket but the clerk had difficulty understanding what he was saying. Once a Tunes had been eaten, the man clearly said "First class ticket to Nottingham".
5. "Only the crumbliest, flakiest chocolate, tastes like chocolate never tasted before." These were the lyrics to the song used by Cadbury's to advertise their Flake chocolate bar. Ice cream vendors serve this chocolate bar in an ice cream cone to young and old alike. What is this more commonly known as?

The Flake chocolate bar was first developed in 1920 and two years later, the Flake 99 was introduced. A wafer cone is filled with soft vanilla flavoured ice cream with the chocolate bar inserted in to the ice cream at an angle. Sometimes an additional drizzle of raspberry or strawberry sauce is added on top.
6. Liquorice All Sorts, Black Jacks, Jelly Babies and Fruit Salad are made by a confectioner called Bassett's. What is the name of their mascot?

Bassett's have manufactured sweets since 1842. Bertie Bassett was introduced in 1929, and is made from liquorice and has a friendly face. Jelly Babies were previously called Peace Babies and they all have individual names. Baby Bonny, Bigheart, Brilliant, Bubbles and Bumper.
7. Bon Bon's were a favourite sweet during the 1950s, 1960s and 1970s. They consisted of a chewy filling with a powdery coating on the outside. Which flavour did they NOT come in?

Children by their hundreds used to stop at the sweet shop on the way home from school and ask for a "quarter of 'bon bon's". A quarter of a pound was the measurement used in all sweet shops during this time period and equates to 113 grams. All sweet shop sweets were served in a small paper bag.
8. This confection made by Cadbury's is their most popular selling item between New Year and Easter. The original TV advert asked "How do you eat yours?" What is the name of this Easter favourite?

This confectionery favourite has a thick chocolate shell. It has a yellow and white cream filling inside which resembles the white and yolk of an egg. Some people prefer to take bites of the egg until it has all gone. Others bite the top off and use their finger to lift out the gooey centre before eating.
9. This is another sweet containing menthol and eucalyptus and was originally designed to alleviate respiratory problems suffered by men working in the North Sea and Arctic Circle. What is the name of this lozenge?

These lozenges originate from Fleetwood in Lancashire, which was a thriving fishing community. A pharmacist called James Lofthouse first introduced a strong liquid remedy in 1865, but changed the format into lozenge for ease of transport. Fishermen were so impressed that they called the miracle lozenge their 'friend'.
10. The Big Purple One is a large chocolate which contains hazlenut with caramel inside. In which tin of chocolates and sweets would you find the smaller and original version?

Quality Street, introduced in 1936, is a selection tin containing individually wrapped sweets. The selection includes chocolate noisette in a green wrapper, vanilla fudge in a pink wrapper, coconut éclair in a blue wrapper and chocolate hazelnut with caramel in a purple wrapper. The latter became so popular that individual sweets were sold and became known as The Big Purple One.
Source: Author Plodd 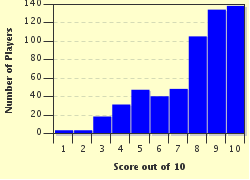 Related Quizzes
This quiz is part of series A Taste Of...: