"Weird Al" Yankovic was so right with the title of his song which is now the title of this quiz. The potato is a very versatile vegetable. Here are some potato treats for you to guess and drool over. This quiz will probably be America-centric.

Quiz Answer Key and Fun Facts
1. If you cook potato slices, cheese, milk, butter and flour together, what do you get?

The answer is scalloped potatoes. It's a very creamy and rich dish. If you were thinking the answer should be potatoes au gratin, scalloped potatoes originally had no cheese in the recipe; currently the two are very similar.
2. What would you be preparing if you were using Russet, Klondike Rose, Katahdin, Long White or Russian Banana potatoes and nothing else?

The potatoes mentioned here are bigger, longer potatoes suitable for baking, so that's our answer. Since no other ingredients are being used, just wrap them in foil and put them in the oven. You can eat them with a little butter or sour cream and chives or stuff them with peppers, chile, cheese and on and on. Some people in Australia like to stuff them with mushrooms and Vegemite. Just another example of how spuds just want to get along with everything.
3. If I were cooking some pancakes made of potatoes, by what name would a Jewish person recognize them?

Latke is taken from a Yiddish word for a shallow-fried pancake of grated or ground potatoes. Jews traditionally eat them during Hannukkah. They are eaten all over Europe, especially Eastern Europe. In Poland they are called placki ziemniaczane; in Belarus, where they are the national dish, they are called draniki.
4. Let's cut up some potatoes into small cubes, put them in a frying pan with some red and green bell peppers, onion, and butter or a little olive oil. It looks pretty good; what will we call this dish?

This dish is easy to prepare, as are most potato dishes, which is another reason for their popularity. Usually, small potatoes like Yukon Gold, red potatoes or new potatoes are used for potatoes O'Brien. Both Boston, Massachusetts and New York City claim to have originated this dish in the early 1900s.
5. Vodka can be made from potatoes.

While most vodka is made from grains such as wheat or corn, some is still made with potatoes. Though we generally think of vodka as a Russian drink, it may have originated in Poland.
6. If you were to take some spuds and shred, julienne or rice them and then pan-fry them, what would they be called?

Hash browns are a breakfast staple in parts of the United States. If the potatoes are diced or cubed they may be known as home fries, a side dish for lunch or dinner. If you add corned beef, chopped meat or vegetables, home fries can be called hash.
7. Which country is generally given credit for inventing potato and leek soup?

We can thank the Irish for this flavorful soup. There are dozens of variations but plan on using potatoes, leeks, celery, onion, milk, chicken stock or broth - and whatever else you might have that looks good! The Irish embraced the potato when it arrived from its native South America.
8. A popular potato dumpling comes from Italy; what is its name?

Potato gnocchi are relatively recent (16th century) additions to the little dumplings made from a variety of ingredients. They are often served as appetizers or the first course of a meal. There are many variations of recipes for them. Though they are considered an Italian dish, Roman soldiers may have first sampled them in the Middle East and brought the idea back to Rome and then to the rest of Europe.
9. Let's make something easy. We'll boil some cubed potatoes, add some mayonnaise, cucumbers, celery, maybe some hard-boiled eggs. Next we'll cool it in the refrigerator and take it on a picnic. Tell me again, what do we call this?

Once again potatoes come to the rescue with an easy-to-prepare recipe so you can spend more time enjoying the picnic. And as always, there are a myriad of ways to prepare it.
10. Which of the following is a popular accompaniment for french fries/chips?


Answer: All of these are common

These and a lot more go well with fries or chips. You can mix gravy and cheese together but you might want to use the white vinegar as a solo topping.
Source: Author CmdrK 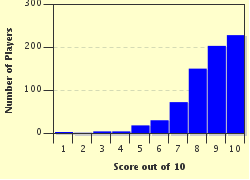 Related Quizzes
This quiz is part of series Not to be Vain but...:

Time to blow my own horn and list a baker's dozen of my favorites of the quizzes I've written.