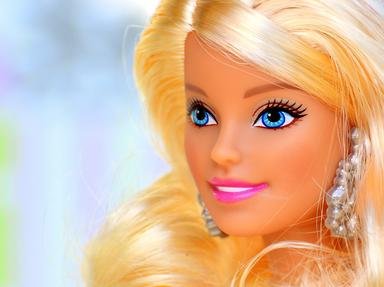 The company Mattel, originally ran from a home garage, was started by Harold Mattson and Elliot Handler. Barbie was Mattel's first doll. Created by Ruth Handler, and released in 1959, this little doll has quite a story.

Quiz Answer Key and Fun Facts
1. Where did Mrs. Handler first get her idea for Barbie?


Answer: It was from watching her daughter play paper dolls.

Ruth would watch her daughter, Barbara, play with paper dolls. Barbara and her friends would play as adults with jobs and mimic what they would hear their parents say. Ruth felt the girls were expressing their future dreams through play. She realized the lack of adult dolls on the market and recognized the need.
2. Mrs. Handler was told that the doll would be too expensive and difficult to produce, but she kept trying. How did she finally get her idea considered?


Answer: She found a doll in Europe similar to the one she was describing and brought it back to the designers.

During a 1956 trip to Europe with her daughter, they spotted a doll that looked like the one Mrs. Handler had in her mind. They went into the store and found more of the dolls in several different outfits. Mrs. Handler asked if the outfits were available separately, but the answer was no. You wanted a new outfit, you bought a new doll.

She found more of the dolls through Europe and took them back to Mattel to be checked out. The doll was named Bild Lilli and was based on a German cartoon character.
3. A very specific body type was used for Barbie. What was the primary reason for this?


Answer: This was for the ease of dressing the doll.

The market savvy Mrs. Handler knew that if all Barbie dolls were made in a uniform size and shape, that it would be much easier to sale changes of clothes and accessories to go with them. She knew from experience with the Bild Lilli doll that the larger legs, slightly bent wrist, and larger waist made actually changing the clothes more difficult for children.

These were changed in the production of Barbie. Charlotte Johnson, Barbie's first personal designer, made sure the dimensions were tightly adhered to.
4. Where did Barbie make her debut?


Answer: It was at the 1959 American International Toy Fair.

Barbie was met with mix reviews at the toy fair. The toy industry was skeptical of a smaller sized doll. Half of the people who looked at the doll, did however decide to order her for their stores.
5. What is an innovative marketing technique that Mattel used to help create a demand for Barbie clothing?


Answer: They placed a Viewmaster with slides of Barbie in her different outfits at each display.

Mattel felt that since separate outfits was such a new idea, that people would need help realizing the use of the product. It turned out kids were so drawn to the dolls and outfits, that stores had difficulty keeping them in stock. The Viewmasters weren't needed for this after all.
6. By 1965, Barbie's fan club was second only to which other group of that time?

In 1961, the vinyl mixture was experimented with. Due to unstable oil concentration the dolls eventually developed oily, shiny faces, arms, and legs. The oils seeped out to the point they left stains in their boxes. Live and learn.
8. Who was the first face of Barbie molded from?

Although the early Barbie dolls make-up does remind us of Audry Hepburn during the same era, the actual facial mold was made after Charlotte Johnson.
9. Francie, made in 1967, was the first attempt at adding what to the Barbie line?

Francie came in a black and a white version. The only difference between the two dolls was the darker complexion. The same mold was used for both. Christie was the first widely recognized African-American Barbie. She was introduced in 1968.
10. In 1961, the Barbie line got another first. It was another doll to add to the line. It was named after Ruth and Elliot Handler's other child. What was the name of this doll?

The designers of the Ken doll said he was very difficult to work with in the beginning. He had flocked hair. The substance they used was very light and feathery. It reacted to static and was hard to get off of places it didn't belong. This didn't last long as they soon switched to painting on his hair.
Source: Author myrab51 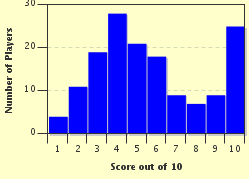 
Other Destinations
Explore Other Quizzes by myrab51