Dining with Llamas: A Culinary Tour of the UK Quiz

Maybe you're hungry or like the company of llamas or want to discover more about UK regional dishes. If you can answer yes to any of these, then come and be the guest of the Revenge of the Llamas team. Don't miss the clues in some of the questions.

Quiz Answer Key and Fun Facts
1. You commence your tour in London where Llamas glendathecat, wbarney and Jabberwok have clubbed together to take you to a traditional East End eating establishment. You see pie and mashed potatoes, but which slippery aquatic creature is also served here?

Eels, pie and mash shops have their origins in the Eighteenth Century. The River Thames was highly polluted and eels were practically the only thing that could thrive in the filthy conditions. Potatoes were cheap and the combination was perfect for feeding the working classes. This correlation between popularity and inexpensiveness is one that will recur through the quiz. Most regional dishes were only popular because the masses could afford them.

Ironically, in June 2009, the UK "Daily Telegraph" reported that eel shops were under threat due to a rapid fall in European eel stocks. (Source : "Daily Telegraph" 27th June 2009)
2. Next stop is Northamptonshire and Llama flopsymopsy who serves you a dish called 'Ock 'n' Dough, traditional to that county. You see the pastry crust which must be the dough part and the first apostrophe allows you to deduce that it also contains which of these ingredients?

Hock refers to a joint of meat found on a pig's leg. Other ingredients are potatoes, onions and carrots. Again, like many traditional recipes, the attraction lay in the fact that it was cheap to make. Please note (for flopsymopsy's sake) that the dish contains NO rabbit.

Ock 'n' Dough is also the name of a popular local folk group if you're ever in the area.
3. From Northamptonshire you move on to Leicestershire where Llama BassMonkey takes you to Melton Mowbray. He tells you that you must try the local delicacy because this is a traditional home of the ...

Technically, the Melton Mowbray pork pie is one type of pork pie and in 2008 it was granted protected status under European Law restricting production to the local area. This puts it on a par with Parma ham, Roquefort and Gorgonzola cheeses and Champagne.
4. Next stop is Lincolnshire where Llamas TCEB and alex_april play host. They ask what you'd like to eat and you opt for Lincolnshire sausages. It's a WISE choice as the sausages derive their distinctive flavour from which of these herbs?

There are many local versions of the sausage (or banger) of which the Cumberland and Lincolnshire are the most popular. Unlike most sausages whose meat is minced, that of a Lincolnshire is coarsely ground.

The reference to wisdom was an attempt to point you in the right direction.
5. Up the Great North road you travel and into Northumberland. There are no llamas here which is enough to make a grown man cry. You dine alone sampling the local dish of Pan Haggerty which contains the main ingredients of potato, cheese and which other vegetable?

This is another dish that was popular because it was cheap yet wholesome at the same time. The ingredients were layered in a pan and then gently fried.

The reference to weeping was meant to be your hint and yes, I do know that tomato is a fruit.
6. You cross over the border to Scotland where Llama alifin_may welcomes you into Aberdeenshire. She serves you Cock-a-Leekie soup and the name is enough for you to work out that it should contain which of these combinations?

A cock is a male chicken and leekie should have pointed you towards the leeks. Traditionally, prunes were also added to enhance the flavour.

Again, for flopsymopsy's sake, we reiterate that there are no rabbits in the recipe.
7. From Aberdeenshire you proceed to the home of Llama noctule who treats you to a meal, Orkney-style. You must have looked dumbfounded when she asked if you wanted Clapshot with your Haggis because she explains that it has almost identical ingredients to 'Tatties and Neeps'. From this you guess that it contains turnips or swedes (the neeps) and which other vegetable?

The tatties in 'Tatties and Neeps' (which is also a traditional accompaniment to Haggis) are indeed potatoes. There is not a great deal of difference between the two recipes except for the significant inclusion of chives in the Clapshot.
8. You now begin the long drive to Lancashire, home of Llama doublemm. He serves up a traditional Lancashire Hotpot and rams home to you the fact that this should contain meat from which animal?

This is another dish based on value where the other two staples are potatoes and onions. It does of course originate from a time when mutton was cheap.

Apologies for the references to 'ram' and 'you'. Hopefully they served their purpose.
9. From Lancashire you continue to travel southward and enter Wales where you are met by Llama baban. Being well-bred, she offers you some Bara Brith. Which of these ingredients is it least likely to contain?

Bara Brith is ... well, bread. The name in Welsh means 'speckled bread' and the end product is somewhere between bread and fruit cake. Emigrants from Wales took the recipe to Argentina. There it became popular under the name of Torta Negra which means 'black cake'.
10. You've reached the end of your tour but you decide to finish in Cornwall because you've heard of one more regional delicacy that you want to try. Here you sample something which wives used to cook for their husbands to take into the local mines. What is its name?

Ready for a sense of deja vu? The main ingredients of the pasty are beef (minced or diced), potato, onion and turnip. The pastry was originally intended to be a covering which miners could hold with their dirty hands and then discard. Nowadays the crust is to be eaten as part of the pasty.

The Cornish Pasty has also migrated across the world in this case to the USA. Emigrating Cornish miners arrived in the Upper Peninsula of Michigan and brought the recipe with them. There it evolved to include rutabaga (introduced by immigrants from Scandinavia) and become a local speciality.
Source: Author glendathecat 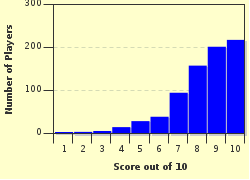