I Could Murder A British Fry-Up! Quiz

I am dieting. And so hungry I could eat my foot. So I need to live vicariously through a quiz about food. My favourite meal is a traditional British fry-up. How much do you know about what this meal contains? Play the quiz, then go and eat one for me!

Quiz Answer Key and Fun Facts
1. The first thing you need to put in the frying pan is a food that is made up of pork and herbs and spices, and is very long, so it is curled up in a round, coil shape. You can also have this as a dinner, served with gravy and mash and peas, but I'm starving and can't wait for dinner, so I'm having it for breakfast. What is this food?

The cumberland sausage originated from Cumberland in England. They are quite chunky in texture, and usually more seasoned than most sausages, and have quite a strong peppery taste. (I have a vegetarian version, like 'Linda McCartney's' sausages.) Another great way of cooking sausages, is to put them in Yorkshire Pudding batter, then you have what's called 'Toad in the Hole'. Obviously.

1. Heat your oven to about 400 degrees fahrenheit first. Put some oil into each hole of your Yorkshire Pudding tin (like the tin you would use to bake cupcakes). Fill each hole about one third full with the oil. Place the tin in the oven to heat up the oil.
2. Then mix 6oz flour, 6oz milk, and 2 eggs gradually in a large bowl. Then beat very thoroughly until smooth (until it looks like a thick cream). Add a couple of pinches of salt to taste.
3. When the oil has become very hot, pour the mixture into each hole, but not quite to the top.
4. Place in the top of your oven.
5. The Yorkshires are done when they have risen spectacularly, are slightly brown on top, and the fire department's on the way. Try not to keep opening the oven to check on them though, as they may not rise well.
6. Best served with gravy.
7. You're welcome!
2. The next item of food that you are going to add to the frying pan is a type of sausage that is made by cooking blood, along with a filler (like bread, meat, fat, oatmeal etc) until it thickens enough to set together, and is then cut into thin slices and fried. What do we Brits call this 'delicacy'?

Black Pudding, sometimes referred to as Blood Pudding, is a traditional part of a British fry-up. There is also a White Pudding, which is the same as Black Pudding but without the blood. Again, the vege option is delicious, made with soya or tofu instead.
3. There are many things you can do with a simple, humble piece of bread. Some people dip it in egg and sugar, and then fry it to make french toast. Some people toast it and smother it in butter. I wouldn't turn down any of these at the moment. But which of the following traditionally goes with a British fry-up?

This is my favourite part of the meal! Slice a couple of pieces of bread in half, heat up a vast quantity of oil until it is extremely hot, (if you use Organic Extra Virgin Olive Oil you can comfort yourself that you're having the healthier option, and pat yourself on the back over the whole thing) and then immerse the bread in it for a couple of minutes until it is crispy. You can then let it stand for a minute on a piece of kitchen roll if you want, to let the excess fat drain off.

It's sooo nice!
4. You need to put the next item of food in a saucepan to heat up for a few minutes. These legumes come out of a can, and are covered in a tomato sauce. There are many different varieties of these around the world, but these particular ones traditionally go with your fry-up and are my favourite, especially the Heinz variety! What are they?

You can get many different varieties of Baked Beans. They can also come in the tins with sausages or bacon; they come in low-fat, or vegetarian, or organic varieties too. Nothing nicer for tea as beans on toast, perhaps with some Marmite spread on the toast too. I'm salivating now...
5. A delicious addition to the fry-up would be this oddly named concoction of fried leftovers from a traditional British Sunday Roast dinner (I feel another quiz coming on...) You put mashed potato together with any leftovers you want - cabbage, carrots, peas, sprouts, onions (and add meat if you wish, but it is mostly served vegetarian.) Put this altogether like a pattie, and then shallow fry it. What is this mouth-watering medley of fried stuff called?

Why is it called Bubble and Squeak you ask? I never asked before because I was too busy eating it. But one theory is that it is due to the fact that it bubbles up and makes squeaky sounds when cooking! Say what you see...
6. Now, I know we already have some form of bread on our plate, and mashed potato as well, but some people also have this next item with their breakfast which comes under the same food group. But I like to have the sort of carbohydrate overload that would, frankly, be illegal. They can be called 'fries', 'french fries', 'pommes frites', but in England they are called something else. What?

Ah, the lovely chip! Also good sandwiched between two pieces of bread and butter with ketchup. Or with a couple of fried eggs. Or smothered in gravy. Or on their own with too much salt. Where was I?

Some facts about the brilliant chip: The first chip to be fried in Britain was in 1860. The term 'french fries' came from American fast food industries, who served 'shoestring' fries, as opposed to the traditional English chunky chips. There are many types of chips, including the above mentioned ones, and 'curly' fries, 'crinkle cut', 'steak' fries and 'potato wedges'. ( I don't think there's any calories in them either, so...)
7. It's probably wise to include a portion of your fruit/vegetable/salad quota for the day too. That way you can feel smug about your fry-up, if slightly confused at the huge bloated feeling afterwards when you'd convinced yourself you'd just had a salad. What two foods from this group are usually served with a British fry-up, even if they are left to one side afterwards for the dog?

Actually, most people love this addition to their breakfast. It's really just me that thinks it's a bit of an error. But again, these items are usually fried. The tomatoes can either be fresh tomatoes cut in half, or tinned tomatoes.
8. No British fry-up would be complete without the next item. It can be fried, boiled and poached, but I like mine scrambled. No more clues needed I'm sure. What food am I waffling on about now?

The way I make scrambled eggs is to mix up the eggs with a little milk (some people like to use cream), add salt and pepper; then melt a small wedge of butter in a saucepan (non-stick, or else you'll be eating scrambled egg with whatever you cook in that pan forever); then cook on a low heat while constantly stirring. Stir until it is the consistency that suits you. I love scrambled egg as a meal on its own, with some grated cheese mixed in.
9. Now your breakfast is cooked, and all piled precariously on a plate too small for the job, so that you can feel better about yourself. But you need to add one final thing on the plate that personally I couldn't do without. It is a popular sauce invented in England, and is fruity, slightly spicy, and brown! What is it?

'HP' stands for 'Houses of Parliament', so called because the man who invented it, Frederick Gibson Garton, heard that his sauce was being enjoyed in the restaurant in the Houses of Parliament. The 'HP Sauce' bottle has a picture of the Houses of Parliament on it, and is the most bought brand of brown sauce in Britain.
10. A final prerequisite to the fry-up (other than a maximum strength 'Pepcid') is a nice, hot drink to wash it all down with. The British are known for loving their cups of tea, and a fry-up without a bucket of it would just be rude. My favourite brand ran adverts on television with talking chimpanzees, which became very famous, and the monkey is still their emblem today. Which well known brand of tea is this?

Around 150 million cups of tea a day are drunk in Britain. On average, a cup of tea has about half the caffeine of a cup of coffee, and PG Tips contain flavonoid antioxidants, which are the same as in fruit and vegetables (so you can add that on to your daily quota then).

It's been very therapeutic writing this quiz. Especially as it was only responsible of me to 'sample' the fry-up in the name of research (I didn't want to be accused of not knowing my subject). But if you are dieting, and have to eat nibbly rabbit food, instead of a plate of cream-clogged eggs, an unfortunate looking sausage, more carbs than you can throw an Atkin's book at, the suspicious sounding bubble and squeak, fried blood, a vat of sauce that is brown, and vast quantities of a drink made famous by performing monkeys, then making a quiz about it is the next best thing. Honestly.

Is anyone else feeling a bit sick?
Source: Author dopple44 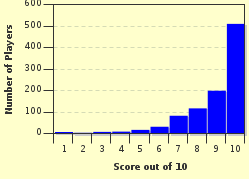 
Other Destinations
Explore Other Quizzes by dopple44