In the word of the old rhyme "Christmas is coming, the geese are getting fat". Not many people eat goose now. What does make a traditional British Christmas dinner in the 21st century?

Quiz Answer Key and Fun Facts
1. Which bird is usually eaten for Christmas dinner in the UK?

The turkey was brought to Britain from America. By the end of the Victorian era it had become the most popular meat for Christmas dinner. It is estimated that nearly 20000 tons of turkeys will be cooked for Christmas 2008 in the UK. The other birds all give tasty dinners, but may well not be big enough for a large family.
2. Christmas seems to be a time for overindulgence. Which of these sauces is NOT usually served with a roast turkey in the UK?

The gravy should be made from the juices of the roast turkey.

Bread sauce is made from bread and milk, which have been cooked together with onion, cloves and other spices and seasonings.

The cranberry sauce can be enlivened with a splash of port.

The apple sauce is probably best saved for eating with roast pork.
3. No traditional British meal would be complete without potatoes. What is the usual way of cooking them to accompany roast turkey?

Roast potatoes are usually cooked to go with a roast dinner. Some people like to have boiled or mashed potatoes as well, as a contrast. I've never heard of anyone having chips with roast turkey.
4. We're all told to eat our five portions of fruit and vegetables each day. Which green vegetable is usually served for a British Christmas dinner?

Brussels sprouts are in season, and readily available at Christmas. Parsnips and carrots are also available in the middle of winter and are often served with the dinner. Today vegetables can be frozen, or imported, so it's possible to have whatever you like with your meal.
5. Did you think your plate was full? There should be room for a bit more. What extra items are likely to be served with the Christmas dinner in the UK?

The bacon may be rolled on its own, or wrapped around the sausages. It's also good when wrapped around dried apricots. The stuffing can be cooked inside the bird, or served separately.
6. I hope you've still got some room. It's time to move on to the pudding. What is likely to appear on your plate?

Apple pie is often served after a roast dinner, but probably not at Christmas.

Ice cream might be more palatable after all that went before, but it's not traditional.

Fruit salad is certainly the healthy option, but who wants to be healthy at Christmas?

The Christmas pudding should have been made several weeks in advance to give it time to mature. It will be black with fruit and probably laced with brandy or rum for extra flavour. After steaming for several hours, it should be brought to the table dressed with a sprig of holy, and drenched in more spirit which has been set alight.
7. You didn't think you'd get away with the pudding on its own, did you? What might accompany it?


Answer: Any of these

Probably all three would be a bit much, even at Christmas! All though there's no reason why you shouldn't have some cream as well, if you like it.
8. Now be careful how you eat the pudding in the traditional British Christmas feast. There might be something extra in your spoonful. What do you hope it will be?

A coin (originally a silver threepenny piece) may be inserted into the pudding. Whoever finds it in their portion is supposed to be rich the following year.

There shouldn't be any stones, unless a raisin stone was missed in the preparation.

The holly is best removed before cutting the pudding, to avoid unfortunate accidents.

While chocolate is nice, it wouldn't survive cooking in a pudding, and is better saved for later.
9. Just when you think you're never going to able to move again, more food might appear on the table. What is it likely to be?


Answer: Any or all of these

The mince pies were originally made from minced meat, but now contain a rich spicy dried fruit mixture. Some people prefer to eat them with the pudding, rather than afterwards.

Stilton is very popular at Christmas. It is a blue cheese which is made in Leicestershire, Nottinghamshire or Derbyshire. Other people might prefer a mature cheddar, or any other good cheese.

Chocolate liqueurs or truffles are a good way to round off the meal, although it's probably better to have some non-alcoholic ones for the children.
10. "Enough", I hear you say. But there's one more thing needed to complete the British Christmas dinner. What is it?

The cracker was invented by Tom Smith in the nineteenth century when he was looking for a new way to wrap his sweets. The twisted paper and the snap made them very popular. Today it is possible to buy crackers in all shapes and sizes. They usually contain a joke or motto, a paper hat and a little gift. It is also possible to buy kits and make your own.

A small puzzle might come out of a cracker. Some families like to make large jigsaws over the holiday. Other people prefer crosswords or sudoku. All are fun, but none are part of the traditional Christmas dinner.

Balloons are often used as decorations, or for playing party games, and (uninflated) could come out of a cracker.

Sparklers will usually appear with the fireworks on Guy Fawke's Day (5th November), although they are often sold for New Year celebrations now.
Source: Author Lottie1001 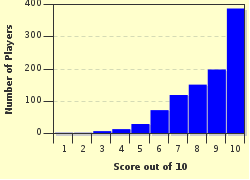 
Other Destinations
Explore Other Quizzes by Lottie1001