Love It or Hate It - Marmite Trivia Quiz

It seems a peculiarly British thing, but many do have an opinion on Marmite - they either love it or hate it. How much do you know though? Take this quick quiz and find out.

Quiz Answer Key and Fun Facts
1. What is the main ingredient of Marmite?

Other ingredients include salt, vegetable extract and folic acid. The spread is extremely healthy and is a great source of proteins and vitamins. I was fed it on toasted "soldiers" as a child and have never stopped loving it.
2. When looking at a jar of British (and best) Marmite what colour is the lid?

Apparently in New Zealand Marmite has a red lid and comes in a plastic jar. It even has different ingredients. As far as I can remember the jar has remained unchanged since I was a (much younger) girl. My only complaint is that because the glass of the jar is dark brown it is very difficult to find those last bits of spread when the jar is nearly empty. It matters you know!
3. Marmite is not approved by The Vegetarian Society.

Although the taste to some can seem almost meaty, Marmite is a totally vegetarian product. It is an excellent source of protein for veggies as there is 1.5 grams of protein in 4 grams of spread.
4. Which vitamin is a huge part of Marmite?

It includes Niacin (Vitamin B3), Thiamin (Vitamin B1), Riboflavin (Vitamin B2), Vitamin B12 and Folic Acid (another form of B vitamin). As if you needed another reason to eat it!
5. In what year was the Marmite Food Company Ltd. formed to market Marmite?

Using yeast extract as a savoury spread had been discovered years before, but Marmite Ltd (as they later became) were the first to market the product. Their base was in Burton-on-Trent.
6. There are Marmite stock cubes available in the UK.

Marmite can be added in its paste form to soups and stews for an added savoury edge. You can also mix a teaspoon of Marmite with boiling water for a drink, but I've never tried it myself.
7. Although Marmite is good for you it is highly calorific.

An average 4 gram serving of Marmite has only 9 calories.
8. Which 2 words go before Marmite to complete the advertising slogan: ".. .... Marmite"?

A highly distinctive and successful campaign in Britain based on the love it or hate it debate. For some reason Marmite brings out passion in people - comedians have incorporated the debate into their act and there have been many a heated discussion in pubs across the UK about it.
9. The yeast extract used in Marmite is a by-product of which industry?

Hence, Marmite is Brewer's Yeast extract.
10. What is the main difference between Vegemite (from Australia) and Marmite?

Again a subject which leads to heated debates - is Vegemite better than Marmite. It basically depends on what you like and where you are from, and maybe even what you tasted first. I've tasted Vegemite once and it wasn't bad, but it wasn't Marmite, but then maybe that's the point. Thanks for playing.
Source: Author miaow 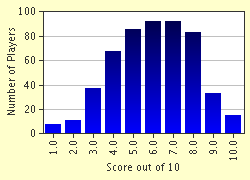 Related Quizzes
1. British Potato Crisps or Corn Snacks Average
2. Please Sir! I Want Some More - British Foods Average
3. Biadh na h-Alba or Scottish Food Average
4. The Great British Bake Off Average
5. Pies Like Us Average
6. A Taste of England [1] Average
7. In a Jam - or is it a Pickle? Average
8. Great Grub from Great Britain Average
9. Dining with Llamas: A Culinary Tour of the UK Easier
10. Eating and Drinking in England Average
11. A Taste of England [4] Average
12. A British Christmas Feast Easier