The third in the Food A-Z Quiz Series, all about the letter C!

Quiz Answer Key and Fun Facts
1. Probably one of the favorite C foods of many, this food has been used in cooking for centuries. The Aztecs even used this to make a drink, adding a bit of cayenne to it. The drink was bitter, but now bars of this are sweet. What could this be?

Chocolate is derived from the cacao plant. The cacao pod carried dozens of seeds, which are yet smaller pods. In these smaller pods is what is eaten. A long and tedious process is involved to make the chocolate we know today. The cacao seeds dry out in the sun, go through long processes, and cocoa powder is made. Cocoa butter, made from a completely different process, is added to cocoa powder to make chocolate. Cocoa butter is really what gives chocolate its sweet flavor. If there is more cocoa powder than cocoa butter, it will be more bitter, and dark chocolate is formed. If no cocoa powder is used at all, and just the cocoa butter is eaten, that is white chocolate.
2. A favorite treat to give to kids during the Halloween holiday, this, although its name says otherwise, is NOT a grain product. What is this treat?

Candy Corn is known to be in the shape of a kernel. That is why it is named after corn. The candy has three colored stripes, the lower part being white, the middle being orange, and the tip of the "kernel" is yellow.
3. What in the world is cuy?

Cuy is the meat of a guinea pig. Guinea pigs are common pet rodents. They are similar to hamsters, but they do not bite as often and they have a tail. Cuy is described of as tasting like chicken (but then again, what ISN'T), but with much more protein.
4. Which of these best describes a deep-fried burrito?

Although Creme fraiche is described as being similar to sour cream, it is much sweeter. Many eat it with strawberries, to make strawberries and cream. Creme fraiche more often replaces yoghurt in recipes than it does sour cream. Because it is more sweet than sour, it is much more preferable on fruit than it is on a taco!
6. What tea claims to calm someone down enough to go to sleep?

Chamomile tea has chemicals in it that puts people to sleep. It probably doesn't work so well when it is chock full of honey and sugar, though. A famous American brand of tea is Celestial Seasonings, with dozens of different tea flavors. Chamomile is one of their most popular.
7. In France, the portobello mushroom is known as what?

The portobello, or champignon de Paris, is known as having a very large top. Common mushrooms, known as button mushrooms, have very tight caps that are also very small. The cap on the portobello is gigantic. It is big enough that the portobello replaces hamburger patties to make portobello burgers, and it can replace bread to make a mushroom sandwich.
8. Which of these is a chicken dish that means "hunter" in Italian?

Chicken Chennai is a very spicy Mexican dish. Chicken Cordon Bleu involves chicken, ham, and cheese. Chicken Ciev does not exist. Chicken Kiev, however, is a chicken filled with butter and herbs and baked. Chicken Cacciatore is an Italian dish, a chicken cooked with tomatoes, onions, mushrooms, herbs, and bell pepper.
9. Which of these is most commonly a dried and ground flower bud?

Choves and Clives do not exist, unless you are talking about Clive Cussler. Chives are an oniony herb. In fact, chives are the smallest of the onion family, similar to the larger scallion (or green onion), and the even larger leek. Cloves are spicy like cinnamon, not like cayenne.

They are spicy flower buds that are normally dry and ground. Sometimes, however, the entire clove is used in a recipe, although, most often, they are too bitter and spicy to eat. They do add an incredible flavor to a dish. Like cumin, cinnamon, and nutmeg, however, a little goes a long way.

It is extremely easy to "over-clove-ify" a dish. (Yes, I made that word up, but it makes sense, doesn't it?)
10. I can't leave without a little sweet dessert. Which of these is the most commonly eaten cookie in America?

I hope you enjoyed the quiz. Please rate it before you leave. And wipe up that drool, will ya? ;-)
Source: Author salami_swami 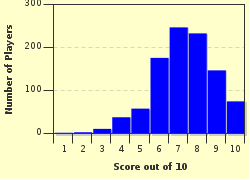 More A to Z Food Quizzes