This is a quiz tests your knowledge on fun facts about ham and cheese. Enjoy!

Quiz Answer Key and Fun Facts
1. In Paris, if you want a delicious grilled ham and cheese sandwich, what should you order?

You can get a Croque Monsieur everywhere from the best restaurants to roadside vendor stands; if you add an egg, it becomes a Croque Madame.
2. Over 200 producers make the famed Prosciutto di Parma. How long must this type of ham be cured to meet local regulations?

A consortium controls standards of production for Parma ham. Only local Parma pigs can be used, and each step of the production starting with the breeding is overseen and controlled by tight standards. So, you can count on every Parma ham to be consistently delicious!
3. Normandy France is famous for its cheese production; which animals provide the milk most cheeses in Normandy are made from?

Perhaps the most famous cheese produced in Normandy is the deliciously runny Camembert.
4. Which of the following cheeses is not produced in France?


Answer: It must be produced in or around Smithfield, Virginia

Smithfield, Virginia has been producing hams for over two centuries, and the term Genuine Smithfield Ham is protected by Virginia statute.
6. Everyone knows Swiss Cheese has holes, right? Which of these cheeses without holes is produced in Switzerland?

Gruyere cheese is made from cows' milk and is often aged in caves. If you visit the Gruyere region of Switzerland, you can watch this cheese being made. First, the milk is heated to a high temperature. Then, the curds are placed in molds, and pressed with weights to help drying.

The cheese is salted in brine for 8 days, then ripened in open air for two months. At least three months of aging follows.
7. If you are a prosciutto lover like me, you know this amazing ham comes from this country:

There are two types of prosciutto - crudo (cured), and cotto (cooked).
8. It is often thought that Spam is made mostly from ham, but what really is the main ingredient?

Spam is produced by the Hormel Food Corporation; each summer, Austin, MN, the town where Hormel's headquarters is located, hosts the Spam Jam, which includes parades that celebrate this ubiquitous food.
9. A friend of mine introduced me as a 'fellow turophile'. What exactly is a "turophile"?

I haven't found a term for someone who loves ham sandwiches - perhaps a croque-esseur?

My friend was just showing off his vocabulary - normally I get introduced as a cheesehead.
10. A favorite restaurant of mine serves a great cheeseburger - it's a burger with a thick slab of Stilton. Where is the flavorful blue Stilton cheese produced?

Stilton is a protected by EU certification; in order to obtain this certification, a number of requirements must be met. For example, it must be produced in one of three counties (Derbyshire, Nottinghamshire or Leicestershire), it must have blue veins radiating from the center, and it must be produced in a cylindrical shape.
Source: Author Sparroc 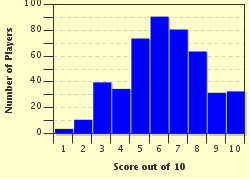 
Other Destinations
Explore Other Quizzes by Sparroc