What happens when a history-loving FT quiz architect starts reading cookery books? You would probably get a series of questions about food and drink related to historical events or places. You'll see what I mean.

Quiz Answer Key and Fun Facts
1. A quote by José Marti became also the name of a longdrink with rum, cola and lemon juice. What was this quote?

The longdrink referred to is of course the Cuba Libre ("Free Cuba").

José Marti (1853-1895) was one of the leaders of the rebellion against the Spanish colonial power on Cuba. He started the rebellion on January 29th, 1895. (In this context "Cuba libre" has nothing to do with Castro's Cuba or with attempts to overthrow him).

Dolores Ibaruzzi, alias La Pasionaria, was a Spanish communist. She exclaimed "No Pasaran!" ("They shall not pass!") on July 18th, 1936, as the Fascist troops of General Franco approached Madrid.

Gabriele d'Annunzio (1863-1928) was an Italian teacher and poet. He wanted to achieve great victories for Italy, so he occupied the Yugoslav city of Fiume (Rjeka) after WWI. Later on, he would have exclaimed "Me ne frego" (which can be translated politely as "I don't give a damn!" - the original is a bit more crude) when the Italian government required him to retreat.
2. The Japanese Emperor is entitled "Tenno" in Japan. However, the honorary title that is used by foreigners is another word, meaning "Honourable Gateway". This Japanese word was also given to a cocktail with cognac, crčme de curaçao and crčme de noyaux. What is this cocktail?

"Mikado" is the word we're looking for.

Origami is the Japanese art of paper folding. By simply folding a piece of paper, the Japanese can create many different objects, such as a frog, a crane, etc.

Ikebana is the typical Japanese art of arranging flowers. Its object is to create "a thing of beauty, a joy for ever".

"Kendo" is the Japanese word for sword fighting. The word means literally "The Way of the Sword". In order to prevent severe wounds, the sport of Kendo is nowadays played with wooden sticks instead of swords.
3. A longdrink with vodka and orange juice has been named after the first Russian satellite, launched October 4th, 1957. What was the name of this satellite and of this longdrink?

The longdrink I refer to is the Sputnik, named after the satellite Sputnik I. The Russian word Sputnik means "companion" and was given to this satellite as its object was to "accompany" the earth for a while. The drink is similar to a screwdriver except that it's usually served with ice water.

The Soyuz ("Union") programme started on April 23rd, 1967 with the Soyuz I. The Soyuz capsules can transport up to three cosmonauts. They are still in use.

The Salyut ("Fireworks") programme consisted of seven unmanned satellites launched between April 19th, 1971 and April 19th, 1982. Some of these satellites had military purposes (gathering information for military operations) and were kept secret.

Mir (the Russian word for "Peace") is a space station launched on February 19th, 1986. It consisted of several modules. It has been followed by the International Space Station ISS, that consists of modules constructed by different space agencies.
4. A dessert with strawberries, vanilla ice, peach and chocolate ice has been named after the traditional pants that the original inhabitants of New York used to wear. What is the name of this type of pants?

The Lederhosen is the traditional outfit of inhabitants of the Austrian province of Tirol. It is a pair of pants that end just above the knee and is made entirely out of leather.

The bermuda is also a pair of pants that end just above the knee. It is made out of various kinds of fabrics and was probably named after the Bermuda islands.

The culottes was a pair of pants that end just under the knee, as most of the European nobility used to wear up to the end of the 18th Century. The French revolutionary citizens wanted to distinguish themselves from the noble class, and so they banned the culottes and started wearing long trousers. Hence the nickname of the French revolutionary people: "sansculottes", literally "the people without trousers".
5. A famous recipe with lobster is named after a month of the French Revolutionary calendar. Which month gave its name to this lobster recipe?

The recipe I hint at in this question is lobster Thermidor - with a sauce of flour, milk, butter, egg yolk and sherry.

The years were counted with Latin numbers instead of Arabic numerals, with the year of introduction as year I.

This calendar was introduced in France on September 22nd, 1792 (known as "1 Vendémiaire An I")
6. A sauce made of butter, flour, milk and mashed tomatoes, was named after the Roman goddess of dawn. Who was this goddess?

Sauce Aurora was named after the Roman goddess Aurora. Her Greek equivalent is Eos, "the pink fingered".

Minerva was the Roman goddess of wisdom. She is the Roman equivalent of the Greek goddess Athena. By the way, an Antwerp luxury car produced between the two World Wars was named after Minerva.

Venus is of course the best known of these four Roman goddesses. She is the goddess of love and (physical) beauty. Her Greek counterpart was Aphrodite.

Vesta was one of the few original Roman divinities. She was the goddess of the hearth-fire and hence protector of the home. In Greek mythology, Hera, the wife of Zeus, mostly looked after these functions. However, there was a minor Greek goddess called Hestia who served these functions as well.
7. A recipe with chicken, tomatoes, garlic, olive oil and (according to some sources) crayfish was named after a battle Napoleon won. The French cooks would have found these ingredients on the battlefield and invented this recipe. Where did this battle take place?

The recipe is called "chicken Marengo", after the battle near Marengo (Northern Italy) on June 14th, 1800, between Napoleon (at that time not yet Emperor - he was proclaimed Emperor in 1804) and the Austrian Emperor Franz I.

In the Battle of Austerlitz (December 2nd, 1805) Emperor Napoleon I fought to the Austrian Emperor Franz I and the Russian Czar Alexander I. Therefore, this battle is also known as the "Battle of the Three Emperors". It is widely regarded as Napoleon's most brilliant victory.

In the Battle of Jena (October 14th, 1806) Napoleon inflicted a devastating defeat on the Prussians.

In the Battle of Wagram (July 6th, 1809) Napoleon again defeated the Austrian army.
8. The Belgian cheese factory Belgomilk produces a cheese named after a village that became famous in World War I. The Belgian brewer Duvel also started producing a beer with the same name in June 2000. However, the production of the beer stopped at the end of 2004. The village I refer to was the centre of a battle fought between the allied (especially British) and German troops from July 31st, 1917 till November 8th, 1917. Which village was the centre of this battle that cost so many lives? As the orthography of most of these villages has changed since World War I, I have given the older spellings in brackets.

The Battle of Passchendaele (also known as the Third Battle of Ypres) moved the poet Siegfried Sassoon (1886-1967) to write the famous line "We died in hell - they called it Passchendaele". The conditions for the battle were utterly appalling: many wounded soldiers could not be evacuated because of the continuing firing and the bad weather.

Vladslo is famous for the German cemetery with the famous sculpture "Mourning Parents" by Kathe Kollwitz. Her son died at the western front.

Ieper (Ypres) was completely destroyed during World War I. It is now the scene of the museum "In Flanders Fields" (named after the famous poem by John McCrae) and of the Menenpoort. At this gate some volunteers still play the "Last Post" every evening in order to remember all the victims of the World Wars.

Poperinge is the city in which Philip Clayton and Neville Talbot founded the "Talbot House", the first club in the vicinity of the battlefields that was open for every allied soldier and officer.

Dixmude is the city where a monument was erected for all the Flemish military victims of World War I.
9. A famous French wine reminds us of the period of the "Babylonian Exile" of the Popes. Between 1309 and 1377, the Popes did not reside in Rome, because they feared the intervention of the Holy Roman Emperor (whose domains included large areas of Italy). Which wine does remind us of this "Babylonian Exile"?

Châteauneuf du Pape ("The Pope's New Castle") is an "appelation contrôlée" in the region of Côte-du-Rhône. It produces mostly red wine, but some white wine also. Châteauneuf du Pape was once used to "enhance" Burgundy wines that didn't reach a satisfying alcohol degree.

Château Petrus is one of the most expensive wines of the Bordeaux region.

Saint-Julien is also a French "appelation contrôlée" of the Bordeaux region.
10. According to some, a type of bread in the shape of a capital letter C was invented in Vienna in 1683, to celebrate the failure of the Turkish army to overtake the city. It is said that the Turks dug a tunnel under the walls of Vienna. As the tunnel surfaced in a bakery, the bakers alerted the citizens and prevented the Turkish soldiers from entering the city. What is the name of this type of bread?

A croissant has the shape of a crescent moon (and thus of a capital letter C), and may have been invented to celebrate the defeat of the Turks. The shape of the croissant reminds us of the crescent moon that decorates the Turkish flag. However, it is highly doubtful that the legend is true. The Turkish army was defeated by a Christian coalition lead by Prince Eugene of Savoy, who acted on behalf of the Austrian Emperor. Just as the situation in Vienna was close to becoming desperate - and the Turks had succeeded in blowing up part of the city walls, the Polish king Jan Sobieski arrived and defeated the Turks at the Battle of [on the] Kahlenberg.

A doughnut is of course in the shape of a capital O, and a carré is a square pastry (mostly with apricot jam).

A "madeleine" is a type of pastry in the shape of a capital letter I. The French author Marcel Proust describes how the soaking of a madeleine in a cup of tea brings him back to his youth (see "A la Recherche du Temps Perdu").
Source: Author JanIQ 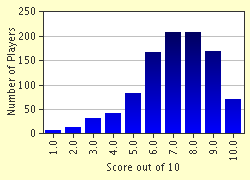 Related Quizzes
1. Spicy or Mild Very Easy
2. What Can't I Make? Easier
3. Do You Expect Me To Eat That? Easier
4. Cracker Barrel OCS, The Food Easier
5. Favorite Dishes in the U.S.A. Easier
6. The Hunger Quizzes Easier
7. Tomato or Chocolate? Easier
8. Official U.S. State Foods Easier
9. What's Cooking? Average
10. Food for Thought: Trivia for Foodies Average
11. Chocolate and Coffee: My Only Vices Average
12. How Sweet It Is! (Making Maple Syrup) Average