This is a quiz about some of the wonderful food that can be found while we travel around the United States.

Quiz Answer Key and Fun Facts
1. Being from North Carolina, I feel a bit of pride in one type of food that we claim as our own. However, Memphis, Texas and Kansas City also claim it as their own too. What kind of food am I talking about?

It's true that several places all claim the barbeque as something unique to their region. Here in the Carolinas, it's pork. Either pulled, sliced or chopped with a vinegar based sauce.
In Memphis, it's still pork that can either be eaten "dry" or with a tomato based sauce.
In Kansas City, it's all about the ribs. Sauce also plays a big part of the BBQ experience here.
Texas means beef. Brisket is one of choicest cuts, slow smoked and juicy.
2. Next, we head down to Louisiana. We are headed for a restaurant that is famous for it's French-style beignets and coffee with chickory. What is the name of this place?

The Cafe du Monde has been in business for over 100 years. They have a sign that reads "Open everyday except Christmas or when a hurricane gets too close". Their beignets have been featured on many TV food shows from "Man vs. Food" to "Unwrapped". They even get a mention in the Jimmy Buffett song "The Wino and I Know".
3. Next, we continue west, stopping in a state that is known for its green chilis. You can find them all over the place. People use them to make sauces and salsas or just eat them as they are. What state is this?

New Mexico chilis can be either red or green, depending on when they are picked. The people of New Mexico really do put them on just about everything. I have a friend who says his wife even puts them on peanut butter and jelly sandwiches.
4. Then it's over to California. We decide to take in a baseball game while we are passing through. Dodger Stadium is already filling up, so we decide to grab some food on the way to our seats. What is the name of the hot dog sold at Dodger Stadium?

The Dodger Dog is a 10" frankfurter in a steamed bun. You can get it either steamed or grilled, although the grilled version is considered by most to be the "classic" way. Estimates put the sales of Dodger Dogs at just over 2 million sold every year.
5. We are still in California, so we head to San Francisco. We can feel the cool air coming off the bay as we head to Fisherman's Wharf. What kind of food is Fisherman's Wharf known for?

Fisherman's Wharf is the place to go for fresh seafood in San Francisco. The Wharf features many restaurants and other attractions. One paticular restaurant, Forbes Island, is actually floating in the bay.
6. We keep heading North and into Washington. We stop in Seattle to take in the sites and decide to grab some coffee. What huge chain of coffee shops was founded in Seattle?

Starbucks now has over 35,000 locations worldwide. The business was founded in Seattle in 1971 by 2 teachers and a writer. They picked the name after the character in Herman Melville's book "Moby Dick".
7. Now we start heading east to the midwest. We stop and have some great Italian beef sandwiches, some pizza and something called a "Superdawg". Where are we?

Chicago has always shown a great amount of pride in their pizza. Italian beef sandwiches are in a class all their own. Superdawg is a drive-in hot dog restaurant that has been open since the 1940s.
8. We head back out, driving north again. We seem to be deep into dairy country. Everywhere I look I see cheese. People are even wearing huge chunks of cheese on their heads. Where are we now?

Wisconsin is the largest cheese producer in the U.S. As a state they produce more than 600 varieties of cheese and are the only state to offer a "Master Cheesemaker" program.
9. Next we head for New England, and that can only mean one thing. Lobster. Which of these is NOT a way lobster is usually prepared?

Lobster did not become a popular dish in America until the 19th century. Before that it was ground up to make fertilizer or cut up as fish bait.
10. On our way again. We stop in Kentucky and have a bowl of something called "burgoo". It's considered a tradition to eat this at what popular sporting event?

Burgoo is a thick stew that contains pork, beef, chicken and vegetables. The traditional drink of the Derby is the mint julep.
Source: Author monstermoose 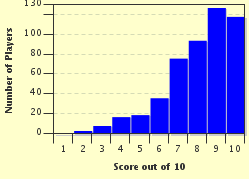 
Other Destinations
Explore Other Quizzes by monstermoose