Test your sauce acumen by correctly identifying these sauces or condiments from various regions and culinary styles.

Quiz Answer Key and Fun Facts
1. What sauce consists of white wine, shallots, peppercorn, and tarragon reduced together and sieved into Hollandaise sauce?

Bearnaise is an excellent companion to beef tenderloin or shellfish.
2. Served as an appetizer with bread or as a condiment, what Mediterranean sauce consists of yogurt pureed with cucumbers, garlic, salt, and olive oil?

Tzatziki is most commonly served in the U.S. with gyros or souvlaki, and may often include dill or mint.
3. Similar in consistency to jelly or relish, what sauce consists of fruit, sugar, vinegar, and sometimes onion, mixed together and simmered slowly, resulting in a fragrant, sweet and sour taste?

Originating in India, chutney was imported to Western Europe in the 17th century. Though many variations exist, mango is the most common style of this accompaniment, often served with seafood or pork.
4. What type of sauce, French in origin, derives its body from pureed fruits or vegetables simmered down?

Due to its versatility, a coulis can be a delicious companion to anything from salmon to ice cream!
5. What sauce, consisting of mayonnaise, anchovy paste, mustard, capers, and chopped pickles, is pureed and served as a dressing for cold meats, poultry, or seafood?

Though French in origin, remoulade is popular in Northern Europe and the U.S., particularily in Creole cuisine.
6. Technically more an appetizer than a sauce, what spread consists of pureed olives, capers, and olive oil?

Often served spread over baguette slices, olive tapenade is also an excellent accompaniment to lamb skewers.
7. Derived from the Italian word for "in an angry mood", what tomato-based sauce is spiked with pancetta, garlic, and a generous portion of crushed red pepper flakes?

A recent survey taken of Britons revealed that nearly two-thirds of them think that "arrabiata" is a sexually transmitted disease of some kind.
8. Though it literally translates to "seafood", this sauce actually contains no fish. Ingredients include soybeans, white vinegar, water, rice, salt, flour, red chiles, garlic, and, often, sweet potatoes. What Asian sauce is this?

Hoisin sauce, also called suckling pig sauce, is Chinese in origin and utilized in many Chinese barbecue and stir fry dishes, including Peking duck.
9. What is a thick, smooth heavy creme widely used in France as a thickening agent in soups or a topping for desserts?

Wonderfully versatile, crčme fraîche works with vegetables and starches as well as fruit, cakes, or cobblers.
10. Most often used in the cuisine of the Provence, what type of sauce consists of olive oil with bread crumbs, garlic, saffron, and chile peppers?

Rouille is served as a garnish with fish and fish soup, notably Bouillabaise. The other three choices are red wines.
Source: Author TelegramSam1 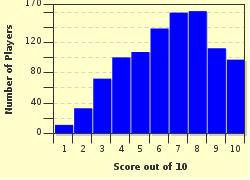 
Other Destinations
Explore Other Quizzes by TelegramSam1