These favorites are from different parts of the USA. Can you name them?

Conch fritters originated in the Bahamas. The sweet, tough meat comes from inside a conch shell. The fritters are made from conch meat, onion and celery. A batter made from flour and egg is added to the other ingredients. Dip them in some sauce after they are fried.
2. Lobster Rolls

Maine has always been known for their fabulous lobsters. Instead of having to pick through and eat a whole lobster, which can be messy, lobster rolls are a favorite. Lobster meat is put on a toasted bun and served.
3. Maple Syrup

Maple syrup is a Vermont staple. It can be purchased almost anywhere. Some people sell it out of their homes, after making it from the sugar maple trees on their property.
4. Blue Crabs

Blue crabs are plentiful in the Baltimore area. Most people like to eat the steamed crabs that are coated with seasoning or soaked in garlic. If you don't want to get messy you can always order crab cakes.
5. Cheesesteak sandwiches

Cheesesteaks are popular in Philadelphia. Take the following, cooked, ingredients and place them on a toasted roll and serve: provolone cheese or (traditional style) Cheez Whiz, thinly cut ribeye steak, sliced bell peppers, mushrooms and onions. (This can also be made with chicken.)
6. Muffuletta

In the Latin Quatrter you will find the Central Grocery. Go there to have an original muffuletta sandwich. Instead of having an olive salad on the side, all ingredients are placed inside the bun.
7. Shrimp and Grits

Shrimp and grits can be eaten for any meal. You could add any ingredients you wish, like cheese and bacon. They can be found on most menus in the southeast USA. The dish is also easy to make at home.
8. Peach Cobbler

This dessert has been around since the early 19th century. Biscuit dough is made into a thick crust and poured into a deep dish and peaches are added. Then it's baked and served either hot or warm. Some put vanilla ice cream on top.
9. Buckeyes

The state tree of Ohio is the Buckeye tree. The buckeye dessert resembles the tree's nuts.
If you like Reese's Cups you will love this treat. They have the same basic ingredients but are round little balls with a little peanut butter showing on the top.
10. "Hot Brown" sandwich

"Hot Brown" sandwiches originated in Louisville, Kentucky. Chef Fred Schmidt made the first one in the Brown Hotel in the 1920s. It's basically an open faced hot sandwich. Turkey, bacon, and sauce were some of the ingredients used on the original recipe. There are other versions found around Louisville.
Source: Author SMiami 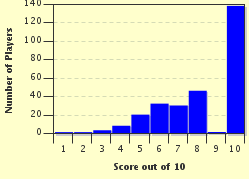 
Other Destinations
Explore Other Quizzes by SMiami