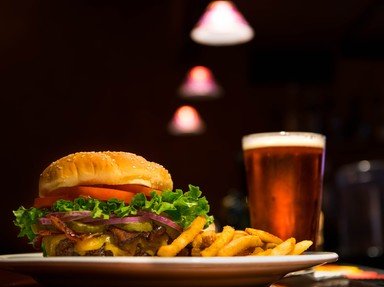 A quiz about some of the terrible food I've eaten late at night after getting home from the pub, all of which seemed delicious at the time.

Quiz Answer Key and Fun Facts
1. Cheese and jam on toast can seem like a good idea at 2am. Do you know the French words for cheese and jam?

Add 'chocolat et jambon' (chocolate and ham), and you've got a real feast.
2. I've been known to experiment with a fish finger and mustard sandwich. Can you name my favourite brand of fish fingers, named after the man who invented the deep freeze?

There really was a Clarence Birdseye (born in 1886) who discovered how to quick freeze food, and was therefore responsible for more indigestion than any other man who ever lived.
3. When I was at college, I once tried to make butterscotch mousse after a night out, and actually managed to get it on the ceiling (honestly). The mousse was a well known packet brand, made by Bird's. Can you name it?

Rather disgustingly, when I woke up the next morning, there was mousse in my hair.
4. After a night drinking Singapore Slings in London's West End, I once ate 10 Kit Kats. Who wrote 'Cat on a Hot Tin Roof'?

A bit of an obscure link, I know, but it's hard to think of good questions about chocolate bars.
5. Which of these is a revolting rotating hunk of meat, stuck on a spike in a dirty looking restaurant, sliced thin and placed between stale pita bread with fiery sauce, which is inexplicably gorgeous when accompanied by beer? (NB. for all you Canadians out there, I understand you have your own particular spelling of this word - I'm looking for the one that the rest of the world uses)

Often associated with Greece, although opinions differ as to whether it was invented there, in Turkey, Canada, or Lebanon.

In Canada, the word is apparently spelt "donair", and I have had to reword this question about 5 times to try and get Canadians to stop sending me correction messages. Hopefully this latest attempt will do the trick, but just in case it doesn't, I've arranged for the "Submit a Correction" button below to be wired into the mains, so that it will administer a painful electric shock to anyone who mentions the word "donair" to me again. You have been warned.
6. After-pub recipe for Welsh Rarebit: Toast bread in toaster. Realise you don't have any BLANK sauce, and use ketchup instead. Add cheese and place under the grill. Realise its disgusting. Throw in bin. Go to bed. What's the blank?

Welsh Rarebit, in its proper form, is a strangely popular dish. In France they chuck an egg on the top and call it Croque Madame.
7. Cooking after a few drinks often involves boiling enough rice for 10 people, even if you're alone. If you carried on long enough, it might turn into this, a type of rice wine.

When drinking sake, be careful not to get confused and drink Saki. He'll be annoyed.
8. If you're out of tinned curry, why not try adding frozen peas to curry sauce? Because of how you'll feel the next morning, that's why. Which of the following pea-related names does not belong to a real band?

I know it must be difficult for a band to think of a name, but I don't think they should ever have to resort to anything with peas in.
9. My brother once ate 7 pizzas at one sitting. He said it was for charity, but I have my doubts. Can you name the herb that gives pizza its distinctive flavour?

You used to be able to get pizza flavour crisps, which like so many things were horrible unless you'd been drinking.
10. After-pub recipe for banana milkshake: Pour a glass of milk. Stick a banana in the top. Its surprisingly satisfying. In which film does a character called Frenchie get milkshake thrown over her?

Most of the shake falls on its intended target, Kenickie. Thanks to Heather for the quiz title.
Source: Author Islingtonian 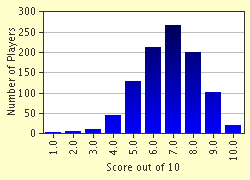