You, Me, and the Croutons Trivia Quiz

Salad is a favorite food around the world. Here are some trivia questions that all deal with this delicious and nutritious food.

Quiz Answer Key and Fun Facts
1. What kind of lettuce is usually used in a Caesar salad?

Named after its creator Caesar Cardini, a Caesar salad is a wonderful mixture of romaine lettuce and croutons. The dressing, which is mixed in as opposed to poured on, is a delightful mixture of olive oil, Parmesan cheese, lemon juice, egg, black pepper with a touch of Worcestershire sauce. As with any salad, variations are limitless, but romaine lettuce is a must.
2. Crab Louie salad is a delicious salad that features crab meat and which of the following vegetables, that is usually eaten cooked rather than raw?

A typical Crab Louie salad consists of romaine lettuce, crab meat, hard boiled eggs, with tomatoes, cucumber, and asparagus. Louie dressing is made from mayonnaise, chili sauce and peppers. Crab Louie originated on the west coast of the United States during the early part of the 20th century and is served chilled. Like many salad recipes there are variations, but all recipes do require crab meat and asparagus.
3. Which one of these options is not a class of salad?

A tossed salad is any type of green salad in which the all vegetables are chopped up and tossed together with a light dressing. A composed salad is one that may have many of the same ingredients but is carefully arranged on the plate in a preconceived manner.

A bound salad is a salad made with a thicker dressing that will maintain its shape when scooped out of the bowl and onto a plate. Examples of these would be tuna salad, egg salad, and potato salad. There is no such thing as a charred salad.
4. A Cobb salad is a wonderful dish that is made with which meat?

The Brown Derby Restaurant in Hollywood claims to have created the original Cobb Salad in the 1930s. The recipe consists of a mixture of dark lettuce, tomato, bacon, avocado, hard boiled eggs, and roasted chicken breast. It is usually served with a red-wine vinaigrette dressing that is topped with crumbled Roquefort cheese.

This delicious salad is served in restaurants all over the world and the claim by the Brown Derby Restaurant cannot be proven beyond all doubt but is generally accepted as true.
5. To which of these countries would you need to travel if you wished to dine on a wonderful meat salad that is called Larb?

Larb is the national dish of Laos. It is a meat salad that includes toasted rice and is seasoned with basil, mint and lime juice. There are many varieties of Larb and many differing types of meat and vegetables may be used. But true Larb will always include the meat, the toasted rice and basil.
6. All salads are served cold or at room temperature.

While most salads are cold as it helps to keep the vegetables crisp, there are some salads that are served warm. Some variants of German potato salad and warm spinach salad are just a couple of examples.
7. A real Greek Salad is topped with which of the following?

Greek salad is a type of summer salad that does not make use of leafy vegetables such as lettuce or endive. It is a mouthwatering mixture of tomatoes, cucumbers, olives, red onions, capers, and bell peppers. Feta Cheese is crumbled throughout before the salad is mixed with olive oil as a dressing. American Greek Salad will often include a scoop of potato salad on the side.
8. The Waldorf Salad was first served at the Waldorf Hotel in which of the following cities?

The Waldorf Hotel first created the Waldorf salad in the 1890s. When the building was torn down and the new Waldorf-Astoria Hotel was built in 1931, they continued to serve this delicious salad as an appetizer, served before the main course. The original recipe consisted of chopped apples, celery and walnuts, mixed with mayonnaise and served on a bed of crisp curly lettuce.
9. Croutons are a frequently used item in many types of salad. That being said, from which language does the word crouton originate and what does the term mean?

Croutons, which derive their name from the French word croute, which means crust, are an absolute necessity in many salads. Their crunchy texture and seasoned flavor are a wonderful addition. They can also be used in soup and eaten by themselves as a snack.
10. Which of the following fruits are you least likely to see in Ambrosia fruit salad?

Ambrosia fruit salad is a delectably sweet mixture of whipped cream, sour cream or yogurt, coconut, and marshmallows. The fruits frequently found in Ambrosia include mandarin oranges, pineapples, berries, bananas, and cherries. Pomegranates are not used. Mixed together and then refrigerated for 3-4 hours, Ambrosia fruit salad can be a wonderful sweet treat that is not difficult to make and can be prepared ahead of time.
Source: Author dcpddc478 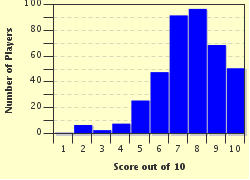