Do You Expect Me To Eat That? Quiz

The following delicacies are found all over the world. I've sampled a few myself. How many can you identify?

Quiz Answer Key and Fun Facts
1. Most of the meat from this amphibian comes from the legs. In France they're called cuisses de grenouilles. What are they called in the U.S.?

I have sampled frogs' legs and yes, they do taste like chicken. During the Middle Ages, on days they could only eat fish, European Catholics would eat frog and beaver meat. Apparently, if it swam in the water it could be eaten. Frogs' legs are considered a delicacy of many countries besides France.

They're eaten in Asia, Portugal, and regions of Greece. They're also enjoyed in the southern regions of the U.S. which is where I sampled it.
2. A soup or stew made from the flesh of this reptile is quite popular in Louisiana and in China. Children have even kept these reptiles as pets. To what reptile am I referring?

I tried a bowl of turtle soup many years ago. I was young so I think the novelty of what I was eating was lost on me. In Asian cuisine soft-shelled turtles are used in making the soup. The soup itself consists of the meat, skin, and the insides of the turtle. Hungry yet?
3. This type of soup is used as a traditional fever medicine in China. It's high in protein and low in fat. You can find these slimy creatures all over your backyard after a heavy rain storm. What are they called?

Long ago, the only member of the Maori tribe of New Zealand who was allowed to eat certain earthworms was the chief. Today Australian worm-eaters enjoy feasting on long white worms dug from rotten logs and eaten raw. Throughout history, the French, Aztecs, and Vietnamese have all dined on worms. Think I'll stick to gummi worms.
4. Early European explorers faced many hardships on board the ships they sailed. One of those hardships included finding food. Without refrigeration, food spoiled quickly. One of the members of a ship's crew was paid to catch rodents on board the ships. What rodents were caught?

Rat catchers were well paid for their work. After all, not only did they catch the meal of the day, they were essentially early pest control workers. The rats that were caught were made into stew. Barrel-makers for France's wines liked their rats to be well fed. The rats were allowed to grow fat on the wine so the barrel-makers could grill them using broken barrels for fuel.
5. This common migratory bird found in North America is identifiable by its reddish-orange breast. However, it is not closely related to the European bird of the same name. Native Americans and colonists actually ate this bird for breakfast. What bird did they eat?

As recently as the Civil War, robins and other small birds were fried and served on toast. The method of preparing robins for human consumption consisted of salting and dredging them with flour, roasting them over a small fire for about ten or fifteen minutes, then seasoning with butter and pepper.

The Migratory Bird Treaty of 1918 stopped this practice. This treaty protects all wild birds except game birds like ducks and geese.
6. What is the name of the rice dish, usually prepared with raw fish, that is considered to be a delicacy in Japan?

Sushi started out as fast food in Japan as early as 1680. First developed in Southeast Asia, sushi spread to China before making its way to Japan. I don't know about other parts of the world, but sushi bars have become quite popular in the United States. Preparing sushi dishes can be quite an art.

In addition to raw fish, sushi artists use, among other delicacies, seaweed and raw squid in preparing sushi cuisine.
7. For those of you who enjoy eating salads, have I got a salad for you! This one is well known in the western and southwestern regions of the United States. It's made with the meat of a certain reptile bought from farms in Texas. What reptiles do these farms provide?

Known as sidewinder salad, rattlesnakes aren't usually the first thing that springs to mind for use in salads. There's only about a pound of meat on the body of a six-pound snake. Snake farms provide skinned whole snakes(minus the head and rattles)for use in restaurants. Chefs cook the entire snake, skeleton and all, then hand-peel the meat from the bones. Add spices and arrange the meat on a bed of mixed greens and you have yourself a proper sidewinder salad.
8. England's royalty in centuries past have used a certain purple flower in cooking. Since this flower is quite edible, it was also used for cooking purposes in France and other European countries even before the 14th century. It is still popular today in Europe and in the U.S. From the following choices, which flower was and still is used in cooking?

English royalty used violets in candy, salad, and hare stew. Violets are not the only flower to be used in food preparation. Romans used rose petals mixed with animal brains to make pudding. Immigrants from Europe brought the dandelion flower to America for use in frying pancakes, salads, and scrambled eggs. Dandelion greens are also used to make dandelion soup and dandelion wine is made from the flowers.
9. The world's most expensive mushrooms can cost up to $640 a pound. These rare and very hard to find fungi are what adds to the cost. Pigs and dogs are primarily used to sniff these mushrooms out from their hiding places underground. What are these delicacies called?

They grow close to hazelnut and oak trees. Chinese truffles are also black truffles but are winter truffles and harvested in China. They are considered to be an inferior quality of truffle.
10. This delicacy is enjoyed by the Cambodian people, especially when fried. What hairy arachnid do Cambodians like to fry up and snack on?

The Cambodian people learned to be really creative with their diets during the food shortage experienced under the brutal Kmer Rouge regime during the late 1970s. Tarantulas must have tasted mighty good on an empty stomach. The Cambodians call fried tarantulas "a-ping" and the city of Skuon seems to be the center for a-ping street vendors enticing passersby with their crispy snacks.
Source: Author nmerr 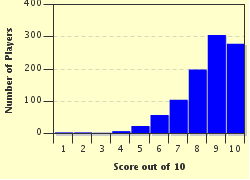