In this quiz I will list three food-related words and you have to match them with the proper answer choice...sounds easy, I hope so!

Quiz Answer Key and Fun Facts
1. Rice, Malt, Balsamic: These are all types of...?

I think the key here is the word 'balsamic', don't you? Rice vinegar is produced by the Japanese and the Chinese and is terrific in soups. Malt vinegar works best when sprinkled on breaded fish, in my opinion. And balsamic, ah balsamic...that lovely vinegar from Modena, Italy. What would I do without it? (Starve, that's what!)
2. Miso, Tofu, Natto: Are all made from?

All three of these items are made from soy beans. Natto is a fermented, sticky, Japanese soy bean concoction which has the texture of mucus. The difference? It's delicious! Miso is a Japanese paste, also made from fermented soy beans. I prefer it as a soup with plenty of tofu...which is redundant when you consider that tofu is also made from, you guessed it, soy beans!
3. Mornay, Béchamel, Velouté: Are all types of which of these?

A Béchamel is the ubiquitous white sauce named for Louis de Béchamel, a seventeenth-century French financier and gentleman. The key ingredient of a Sauce Mornay is cheese...otherwise it's just a simple Béchamel. A Velouté is also similar to the classic Béchamel, but instead of milk a chicken or fish stock is added.
4. Chicken Piccata, Tapenade, Tartar Sauce: These recipes taste much better with which key ingredient?

By the way, did you know that capers are marinated flower buds?
5. Blue, Goose, Elder: These are all types of which fruit?

Blueberries are well-known for being, well...blue! Gooseberries come in various colors, most commonly green. There are two kinds, from what I understand...Whitesmith and Achilles. Finally...your mother was a hamster, and your father smelt of Elderberries! Don't risk eating Elderberries raw, they can be poisonous. Try cooking them into a jam or jelly!
6. Chipotle, Ancho, Cascabel: All share what characteristic?

These are all dried peppers. A Chipotle is nothing more than a dried, smoked Jalapeńo while an Ancho is a dried poblano pepper. A Cascabel, aka Bolita, is a round little red pepper whose seeds rattle around when it is shaken (hence it's name meaning 'jingle bell'). On the Scoville ratings (testing Capsaicin levels) chart an ancho measures in at between 1,000 and 1,500 units, a cascabel at between 1,500 and 2,500, and a chipotle falls between 2,500 and 5,000.

These levels are nothing compared to the Habanero which measures in at 100,000 to 300,000!
7. Squab, Pigeon, Quail: True or false...they are all essentially the same bird species.

A little trick here, actually the squab and pigeon are related, both from the dove family (columbidae). Quails are the smallest game birds consumed regularly in the U.S. and are part of the pheasant family (phasianidae).
8. Kumamoto, European Flat, Olympia: These are all types of which seafood?

The Olympia oyster is indigenous to the American west coast, while the Kumamoto originated in Japan (where it's now extinct). The European Flat is considered by some to be the 'original' oyster, whatever that means, and resides on the coasts of Europe and North America. I love slurping a raw oyster down with a bit of tobasco sauce and lemon...don't you? No? Could I tempt you with some oyster stew then, or smoked oysters?
9. Cassava, Manioc, Tapioca Root: Which of the following is synonymous with the previous three mentioned here?

Believe it or not, all of these are names for the same root-like plant that essentially works as the potato in many Latin American countries. Tapioca pudding is absolutely essential stuff, so this root gets my thumbs up!
10. Chutney, Basmati, Samosa: Are all food related names from which language?

These are all foods related to Indian cuisine. There are a variety of sauces called 'chutneys', usually including fruits, vinegar and sugar. They are used as condiments. Basmati is a wonderful type of rice that I think you should try, if you haven't already. A samosa is a pastry filled with meat or vegetables. I'm hungry...I think I'll go get something to eat. Thanks for playing!
Source: Author thejazzkickazz 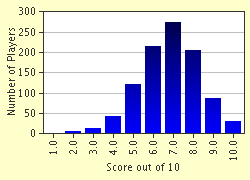