Think you know food? Take this quiz to find out.

Quiz Answer Key and Fun Facts
1. A "roux" is a preparation used to thicken sauces and soups.

This is a combination of cooked flour and butter that is incorporated into hot broth to thicken the consistency. A roux is 60 percent flour and 40 percent clarified butter.
2. On a traditional French onion soup, what cheese is used?

Traditional it is topped with an aged stronger Swiss cheese. A French onion soup contains caramelized onions, baguettes, and a rich onion beef broth.
3. Which of these fruits have its seeds on the outside?

Every other fruit's seeds except for strawberries are on the inside, and they can be seen when you bite into it. Note that shortening "kiwifruit" to kiwi has mostly been accepted into daily speech unless it could lead to confusion where it is always preferred to append "fruit" or "bird" - or in the presence of a New Zealander who might consider the use of "kiwi" for a fruit mildly offensive, so be careful about just when you use the short name.
4. If you were to order 16/20 shrimp at a U.S. Fish Market, how many shrimp would you get in one and a half pounds?

In the United States, 16/20 count shrimp refers to the approximate count of shrimp per pound. This refers to raw weight.
5. What is a consomme?

It is a stock that has been clarified with vegetables and egg whites. A consomme is a traditional classic French soup, known for its clarity and flavor.
6. Does a traditional croquant dessert have almonds?

It is a combination of caramelized sugars and almonds. It is used for garnish and molding, but when warmed can be shaped into bowls or vases. It is also used for dessert displays.
7. Rome is a city, but what fruit is also given the name Rome?

It is a fibrous apple that is used in stewing and baking. This American apple isn't as sweet as a golden delicious, so it is not usually consumed as a hand-held fruit.
8. When sautéing an item, what do you use?


Answer: a small amount of fat (butter or oil)

Sautéing is accomplished with a hot pan, which helps brown or caramelize the cooked product. When sautéing, you can also use clarified butter or purified oil, but the amount should stay small. The word sauté means "jumped" in French.
9. What meat is Coq au vin made with?

It is made with older age poultry and is simmered in wine and vegetables. Traditionally, it is made with pearl onions, tomatoes, red wine, celery, bacon, assorted herbs and chicken broth.
10. Napoleon was a French leader, but it also refers to what in a dessert sense?

In culinary terms, it is foods that are stacked, and/or layered. This can be a dessert or also be a savory such as Eggplant Napoleon, or a stacked appetizer of seafood.
Source: Author kabuggi 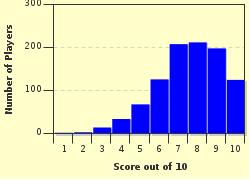 
Other Destinations
Explore Other Quizzes by kabuggi