Hiya! This quiz is all about food, one of the best things in the world. Hope you like it and Good Luck!

You may find it hard to believe but there are many varieties of carrots, there is even one for every letter of the alphabet!
2. What is a thick spread made from mashed chickpeas, tahini, lemon juice and garlic? It originated in the Middle East.

Foodies believe hummus was created over 4000 years ago - don't ask me how they know that! I wasn't there! :)
3. The Latin name for this food is Citrus sinensis. What is the English name for it?

There is at least one variety of cheese for every letter of the alphabet and there are at least 18 for the letter Q!
5. What food comes from the Greek words meaning 'mountain' and 'joy'?

Oregano is found in Greece covering the hillsides and blossoms as a white flower.
6. This food can be loosely categorized into four groups: crisphead, butterhead, leaf, and romaine. What is it?

Lettuce originates from the wild Lactuca seriola which was originally found in the Mediterranean and Near East. It has been transformed from an erect plant with bitter leaves to many different varieties, some of which are sweet and not all green!
7. What food is known as Alligator Pear in English, Aguacate and Palta in Spanish?

The avocado is thought to have originated from Southern Mexico. Avocado flowers appear in January to March in the form of yellow-green blossoms.
8. What food was thought to cause cancer and be poisonous around the 1540s in Europe?

Tomatoes first grew as wild, cherry sized berries in the South American Andes. Tomatoes are fruits.
9. A chicken's product is an _____ ?

Before the French revolution they (the French) had already devised 685 ways of preparing eggs!
10. Which US state had the very first Colonel Sanders fast food outlet selling chicken?

Colonel Sanders opened his first restaurant in Salt Lake City with Pete Harman in 1952, however he did not sell chicken there, the first outlet that sold chicken was in Corbin, Kentucky. Colonel Sanders' full name is Harlan David Sanders. He was born on September 9, 1890 and died on December 16, 1980 at the age of 90.
Source: Author buffy_gellar 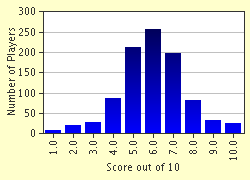 
Other Destinations
Explore Other Quizzes by buffy_gellar