This is a quiz about official US. state foods, which may include fruits, vegetables, even desserts. Enjoy.

Quiz Answer Key and Fun Facts
1. This delicious berry, from the genus vaccinium, is the state fruit of Maine. What is this wonderful fruit that can be used in pies, jams, and many other things?

The Wild Blueberry became the state fruit of Maine in 1991. It is a very healthy fruit that is high in antioxidants and also anti-inflammatories.
2. The state dessert of Maryland is the Banana Cream Pie.

The actual state dessert of Maryland is the Smith Island Cake. This delicious cake is a round, chocolate, multi-layered cake with icing between each layer. It can have as many as ten layers. It is then covered with more icing all around as well as on its top. It is considered one of the top 50 fattiest foods.
3. This fruit actually has its seeds on the outside: What is the state fruit of Louisiana?

The strawberry became the state fruit of Louisiana in 1980. It can be used as a topping for ice cream, made into jelly, used as a filling for a pie, eaten as is, plus many other uses.
4. What is the state vegetable of Georgia? Don't cry now.

This type of onion has been grown in Georgia since the 1930's. By law it may only be grown in certain areas of the state due to the low concentration of sulfur in the soil. This onion has several varieties.
5. What is the state dessert of Missouri? Don't freeze up now.

Believe it or not, it is actually the ice cream cone. A group of children ranging in age from 11 to 14, approached the Missouri state government on the idea. They managed to get a bill introduced and passed. There are many different claims to who actually invented this wonderful treat. Some go back to 1896.
6. The state fruit of North Dakota is the Chokecherry.

The Chokecherry became the state fruit of North Dakota in 2007. This fruit is a small berry and can have a very sour taste. They slightly sweeten as they ripen. They grow on a small tree or large shrub and can be used to make jam, jelly, or syrup.
7. There is some controversy whether this is a fruit or a vegetable. What is this state FRUIT of Ohio?

Although there is some dispute whether the tomato is a fruit or a vegetable, it has been the state fruit of Ohio since 2009. It has many varieties and uses. It can be sliced, diced, stuffed, turned into sauce or puree and baked, among other preparations.
8. This treat is an anise and cinnamon flavored shortbread cookie: What is the state cookie of New Mexico?

The bizcochito is a crispy, lard-based cookie. It became the state cookie of New Mexico in 1989. Its recipe came with the first Spanish colonists to settle in New Mexico. It can be eaten throughout the day. It is very prevalent at religious ceremonies, as well as weddings.
9. The state fruit of South Carolina is the Apple.

The cherry has been the state fruit of Utah since 1997. It comes in both sweet and tart varieties. Utah is the second largest producer of the tart variety and fifth largest producer of the sweet variety in the US. It is the only state that ranks in the top five in both varieties. They can be used in pies, dried, made into a jelly, among other uses.
Source: Author meister88 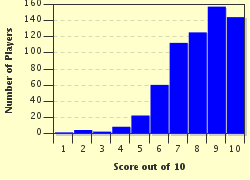 
Other Destinations
Explore Other Quizzes by meister88