Have a Drink on Me Trivia Quiz

There are many different types of cups, glasses, and other drinkware. Some is specialized for certain drinks and some is not. C'mon and wet your whistle and have a drink on me!

Quiz Answer Key and Fun Facts
1. Most often used to serve champagne or other sparkling wines, what is the name of this stype of stemware?

This type of glass is usually called a champagne flute. The stem allows the drinker to hold the glass without causing the temperature of the champagne in the bowl to elevate. The narrowness of the bowl also helps retain the characteristic carbonation of champagne.
2. What type of drink should I expect to find in this lovely set of demitasse cups?

A demitasse cup is a dainty cup used to serve espresso and Turkish style coffees. The word itself comes from French and means 'half cup'. They usually hold about two ounces of liquid. These cups are usually made of porcelain or crystal and often sit in ornate cup holders. There are even ornate demitasse spoons for stirring this liquid gold.
3. Often associated with Bavaria, what is the common name for this type of beer mug?

This is an example of a beer stein. They can be made of glass, porcelain and earthenware. The lid was rumoured to have been created as a preventative measure against the diseased fleas that were spreading the Black Plague throughout Europe. Steins usually come in litre or half litre sizes, although there are some which will hold many gallons. Steins are often works of art that are not often used outside of the Bavarian regions.
4. Which of the following options is NOT a correct name for this type of stemware?

Usually called a snifter, this shape of stemware is also known by these other names, excluding 'croaker". A snifter has a short stem, as most drinks served in this glass are served at room tempreture, and holding it by the stem or the bowl is equally permissible.

It is usually used to serve cognac, brandy, and sometimes whisky or specialty beers. By cupping the bowl, the liquor is warmed slightly, which is believed to release the aroma. This glass is used for drinks that have the complex aromas that are considered important to the taste of the beverage.
5. This drinking vessel is from ancient Australia and is known as an 'amphora'.

This statement is false. This is an image of a chalice, a type of footed cup used for holding all kinds of drinks. They are often used in religious ceremonies, and can be made of any kind of metal, wood, or stone. They come in a huge variety of sizes and shapes. An amphora was a narrow bottomed ceramic container that was usually used for marine transportation of liquids.

While some were ornately painted, most were simple ceramic containers used to carry wine. They usually had handles and a narrow, almost pointed bottom.
6. This photo is of a variety of drinking utensil known by which quizzical name?

This drinking vessel is known as a fuddling cup. It was just one of the many styles of puzzle cups that were very popular from the 17th-19th centuries.
There were many types of puzzle jugs that were used for entertainment. The uninitiated was invited to drink from these unusual cups which had many holes, straws and tubes built in. Usually the drinker ended up pouring the drink on themselves until they figured out which straws or tubes to use and which holes to cover with their fingers.
7. Known as a chawan, what drink should you expect to find inside this type of drinkware?

Chawan are ceremonial tea bowls used in the traditional Japanese tea ceremony. These porcelain glass bowls come highly decorated and without handles. Chawan are handed down through the generations and are highly prized family possessions. Those used in winter are slightly deeper in style to keep the tea warmer for a longer period of time.

Besides porcelain, chawan can be made of a variety of types of ceramic and there are some made of jade and other semi-precious stones.
8. Which type of drinking vessel is one of the biggest causes of pollution in the world?

Disposable plastic cups can be found in landfills throughout the world. The creation of plastics has helped humanity in many ways. But sadly it is not ecologically safe, and millions of plasic cups and bottles end up in our landfills and our oceans everyday.
9. Known as a nautilus cup, what drink was this exotic cup made for?


Answer: These cups were for decoration and rarely used for drink.

Nautilus cups were usually decorational rather than utilitarian. Made from nautilus shells, and decorated with gold, silver, and jewels, these ornate works of art were occasionally used for the ostentatious drinking of wine, but only rarely. Most drinks other than water would eventually cause damage to the shell.
10. This beverage glass is known as a shot glass and most drinks served in this type of glass will not have which of the following options?

A shot glass is used for measuring a shot of liquor. The drink may be served in this glass or it may be used to measure out a shot of liquor to be used in a cocktail. It will not contain ice. The origin of the name for this glass is unclear but there are many entertaining stories as to where the name began.

This is a common glass that often contains advertising on it and can be found in almost any bar around the world.
Source: Author dcpddc478 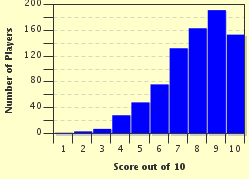