An Author Challenge by mutchisman prompted me to 'rattle' off a series of questions that are more 'snakes and larders' than 'snakes and ladders'. Test your knowledge in 'hiss' quiz about 'snakey' concoctions. Good luck!

Quiz Answer Key and Fun Facts
1. "What is Reggie the rattlesnake's favourite song?" "Snake, rattle and roll" Rattlesnakes are required in the making of 'Texas Snake Cakes'. The snakes are skinned, gutted and have their heads and tails chopped off, before being diced and placed in a pan of 'crab boil'. They are later mixed with egg to bind the meat, shaped and fried. If serving four people, how many rattlesnakes would be required for this dish?

The recipe states that one rattlesnake is required per person. 'Crab boil' is spicy water, also flavoured with lemon juice, primarily used to prepare shellfish. It can be home made or bought in either powder or liquid form. The 'Texas Snake Cake' recipe also includes a green onion plus salt and pepper to taste. Tartar sauce is a suggested accompaniment to the dish.
2. "What do you call a snake who works for the government?" " A civil serpent" A tradition of the Indian Commandos during their training course was to capture, kill and eat a snake, the more venomous the better. The snake population has declined in India, which is one reason for this element of training being banned. Snake is still an 'ingredient' of the training course though. How many snakes per class are allowed?


Answer: One for the class

As per an article in the 'TimesOnline', dated 7th March 2009, a reason for the snake test was to prove that the trainees had "conquered their fear of the wild". The snakes now used on the course are captive-bred and they are restricted to one snake per class, so the trainees are still able to sample the meat.
3. "What do you get if you cross two snakes with a magic spell?" "Addercadabra and abradacobra." I wonder if this could be a trick question, you decide. Snake gourd curry is made from the head and tail of a gourd snake.

Snake gourd, which is also known as padavalanga, is in fact a plant. It has a thin, long fruit which can grow to in excess of 130 centimetres. The name is derived from its snake-like appearance. Snake gourd curry is a vegetarian curry.
4. "Waiter, there's a snake in my soup." Snake soup is a popular dish at Cantonese restaurants in Hong Kong between December and March, during the 'snake soup season'. Where are most of the snakes imported from for the production of the soup?

The snakes most often used in snake soup are cobras and tree snakes. A majority of these are usually imported from Canton in Southern China. Canton is well known for its export of snakes. The Chinese believe that snake soup is therapeutic and can cure illnesses such as malaria, but an essential element of the cure working, is that the dish is expertly prepared. Snakes are also imported by Hong Kong from Thailand.
5. Many restaurants in Vietnam serve 'Snake Bile Wine'. The gall bladder of a live cobra is slit open and the bile is mixed with rice wine. Snake handlers prepare the drink, freshly made, at the tables of diners. This unusual drink is traditionally served prior to eating other snake meat dishes. What is the Vietnamese name for this wine?

'Snake Bile Wine' is also popular in China. The wine is said to have healing properties and reputedly enhances the virility of men. The mix of the bile and rice wine gives it a greenish black colour. In Datong, China, the 'Snake Bile Cocktail' is bile mixed with Mao-tai, which is a Chinese liquor.
6. "What do you get if you cross a snake with a Lego set?" "A boa constructor" In the Congo, the boa constrictor is served in restaurants, as are monkeys and tortoises. As per the congocookbook.com, if cooking 'Sand Boa', what sauce usually accompanies it?

A traditional Congo recipe states that the boa should be smoked over coals. It is served with a hot African sauce called Pili-Pili. The smoked boa is soaked in water before being added to a pan of the sauce.
7. A 'snake-bite', in England, is a rather intoxicating drink consisting of lager and cider mixed together. However, in 2002 it was reported that a man in Beijing had a 'snake bite with a difference'. He opened a bottle of alcohol, which contained what was supposed to be a 'preserved' snake. On opening the bottle, the snake popped out and bit the man on the neck!

This was an article that featured in the Xin Bao newspaper in Beijing. The man was taken to hospital where, although suffering from shock, he made a full recovery. The snake had apparently been in the bottle for a year. It was able to survive from air entering the bottle via the cork!
8. "What kind of snake is useful on your windscreen?" "A viper" 'Snake Wine' is a popular drink in some countries. Apparently there are two such varieties of this wine. One is by 'preserving' a whole venomous snake, or snakes, in a bottle, and the second is by 'mixing' snake blood or bile with alcohol. Cobras and vipers are used in this wine. Where is this wine said to originate?

'Snake Wine' originated in Vietnam. Many countries do not allow this wine to be imported due to the fact that the snakes used in it are endangered. In 1998, the Vietnamese government banned the sale of snakes and cats to China to assist with combating rat infestation.

In Hanoi, there is a village comprising of snake restaurants, known as 'Snake Village'. Although this wine originated in Vietnam, the Chinese maintain it originated in Canton.
9. "Which hand would you use to pick up a dangerous snake?" "Someone else's" In 2007, Robert Staegemann, the chef at the Vivat Bacchus restaurant in Farringdon, London, offered a starter of "rattlesnake, with black-eye beans, lime crčme fraiche and smoked chilli jelly". Where were the rattlesnakes imported from?

A 'TimesOnline' article, dated 14th July 2007, stated that rattlesnakes cost Ł60 per kilo and the snakes arrived at the restaurant from Arizona, minus their heads and tails. Robert Staegemann is renowned for unusual dishes on the menu and previously had 'crocodile spring rolls' on his menu.
10. "What do you call a python with lovely manners?" "A snake charmer" British 'survival expert' Edward Michael Grylls, is known for presenting 'Born Survivor', first aired on British television in 2006 (known as 'Man vs Wild' in America). During the series he was seen eating a live water snake by biting its head off. By what nickname is Edward Michael Grylls known?

'Bear' Grylls was born on 7th June 1974. In 1998, when he was 23 years old, he climbed Mount Everest, being the second youngest Briton to do so. On 11th July 2009, he became 'Chief Scout', of the Scout Association, the youngest to hold the post since 1920, which saw the appointment of Robert Baden to the role, which was created in that year. 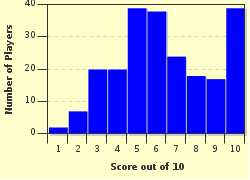 Related Quizzes
1. You Ate WHAT?! Easier
2. No Fish-Guts, No Glory Easier
3. Eat Your Flowers Average
4. Waiter! Waiter! There's a Fly in My Soup! Average
5. The Gastronomic Guild Gets Goofy Difficult
6. I Cook With Tulips Average
7. Because Seven Ate Nine Average
8. You Can't Eat That, But You Can Sure Try! Average
9. Yeuch! I'm Not Eating THAT! Tough
10. Man Eating Bugs! Average
11. That Tastes Disgusting! Average
12. Night of the Living Garlic Bread Average


Other Destinations
Explore Other Quizzes by demurechicky