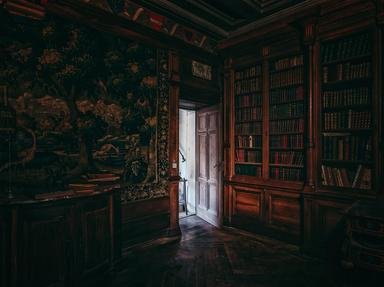 A test of your knowledge on names of collectors and enthusiasts.

Quiz Answer Key and Fun Facts
1. The painting by Carl Spitzweg which is known as "The Bookworm" portrays what type of enthusiast?

"Bibliophilia" is an appreciation of the quality and format of books, this is not to be confused with "bibliomania" where a person loses social relations due to their desire to possess a particular book.
British Prime Minister Gladstone was known as being a bibliophile.
2. Which of these are you most likely to find in your local pub?

The platypus is one of only two species of mammals which lay eggs. The other being the echidna.
An "oologist" collects bird's eggs, and although the platypus lays eggs, it is not a bird.
Due to an increase in popularity, oologists now target the rarer eggs (i.e eggs of those birds whose numbers are dropping). This has resulted in the "Wild Birds Protection Act" in 1954 in the UK, making it impossible to collect eggs legally. As a result, oology is now very much an underground hobby.
4. Waylon Smithers (from the Simpsons) is most likely to be described as which of these?

That's right! Smithers has other interests besides Mr.Burns.
Waylon Smithers own the largest collection of "Malibu Stacies" and so would be a planganologist (collector of dolls).
5. I open my drawer to see my collection which includes a "Three-Skilling Yellow", a "Penny Magenta" and an "Inverted Jenny". What am I most likely to be described as?

A "cartophilist" collects cigarette cards.
A "brandophilist" collects cigar bands.
A "numismatist" collects coins.
Philately is one of the largest areas of enthusiasm. This is shown by the measures taken to obtain the rarer stamps of the world. 2 "Post office Mauritius" stamps were sold in 1993 for $3.8 million, at the time, the highest price ever paid for a philatelic item. The "Three-Skilling Yellow" was sold at auction in 1996 for $2.8 million. I'm therefore pretty unlikely to find it in my drawer!
6. What is the name for a wine enthusiast?

Oenophiles now have more choice than ever when it comes to wine as many countries (such as France) are introducing an ever increasing variety of wine on top of the famous names she exports already. Also, Argentina, formerly known as the "sleeping giant" is now very much awake in terms of their economy, which has grown 50% in the last few years. Argentina's volume of wine exports are now greater than Chile, Australia, South Africa and New Zealand combined. Finally, as well as producing the greatest volume of the worlds wine, Italy offers a huge range from sweet crisp whites to robust chewy reds.

Italy is home to Chianti, Barolo and Vapolicella to name a few.
7. A collector of umbrellas is known as a what?

Strange but true. The others do not exist.
How about a quick history of the umbrella?
Umbrellas can be seen in early art of Greece, Egypt and China. It was the Chinese who first used the umbrella in the way we do today (to shelter from rain). By 1750, the umbrella was commonly used in Paris as to protect from rain but they were not common in London until 30 years later. Early umbrellas were made of wood or whalebone. The steel framed models we know today appeared in 1850.
8. Which of these are most likely to be found in a church with a tower?

A "campanologist" is a bell-ringing enthusiast.
The word comes from the latin "campana" meaning bell.
Perhaps one of the most famous bells to be rung was the Liberty bell in Philadelphia which is said to have rung out on July 8th 1776 to summon the citizens of Philadelphia for the reading of the Declaration of Independence.
The famous crack on the Liberty bell has rendered it unringable. The cause of the crack is still disputed...perhaps an over-excited campanologist.
9. "Toxophilite" is a word to describe a person with an enthusiasm for what?

This is a very common question as many immediately think poisons.
So apologies for including it as an option.
As well as being used in several historical battles, archery was prominent in mythology. In Greek mythology, Apollo mocked Eros (Cupid) saying he was not worthy to possess his bow and arrow. Eros was enraged and so shot Apollo with a golden arrow, causing him to fall in love with the nymph Daphne. Meanwhile, Daphne was shot with a lead arrow, causing hatred and repulsion towards Apollo. Such was the hatred that Daphne actually turned herself into a tree rather than embrace him. Charming.
10. A collector of butterflies can be called a what? 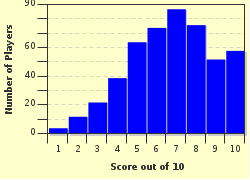