In the U.S. the term "oldie goldie" is used for something that is still good, even though it is old. Can you identify these games that were popular long ago from the materials needed to play each? The hints given may help!

Popular in the late 1700s, Bubble The Justice was similar to an earlier game called Nine Holes. Players took turns rolling a metal bowl down a wooden board that had nine numbered drilled holes. The object of the game was to either roll the balls into the holes in number order or score as many times as possible.

The method of playing the game was similar to one called Bumble Puppy, where, apparently, stones were used instead. The game was named because it was one of a few still permitted after many pub games were outlawed in London in the late 1700s.
2. Dregs of Drink, Metal Basin, Loose Plate (Nothing to do with housing or transport)

Dating all the way back to ancient Greece, Cottabus (Kottabos) was a popular game at the symposium, where men would eat, drink, debate, and be entertained. The lees, or dregs that were left in the bottom of the wine cup were tossed as a plate that was mounted above a metal basin.

The purpose of the game was to knock the plate into the basin in a way that would make a pleasing noise. Apparently there were many versions of the game, and like many activities in ancient Greece, cottabus served a dual purpose: one should have fun AND practice hitting targets should that skill be needed in war!
3. Die, Drink (Rowdy behavior is fun!)

Hijinks was a drinking game that was popular in Scotland in the 1600s-1700s. Participants would roll a die and the person with the lowest scoring number would either have to take a drink, drain their cup, or pay with some other type of silly task. Typically the playing of the game would result in other pranks and the like, which explains the term that is used today to describe rowdy behavior.
4. Sparrow, Hat, Rope (PETA would disapprove today)

Apparently a popular game in the 1700s at village festivals, the participant in this game would have his hands tied behind his back. He then would proceed to attempt to bite off the head of a live sparrow that had been placed in a hat! In some versions, the sparrow's wing would be placed in the person's mouth, and the person was still expected to bite its head off.

The object of the game? It's difficult to tell. The participant would be pecked and bitten on the face, and there might have been a small reward for his attempt.
5. Robes, Rope, Tub of Water (It was a royal mess!)

Popular in the 16th and 17th centuries, King Arthur was played by sailors. One of the players would dress up in a robe and a wig made of old rope and, as the "king", would sit next to the tub of water. The other members of the crew would take turns being introduced to said king, and pour a bucket of water over his head while saying "Hail King Arthur". Anyone who laughed or even smiled during the game would be the next king.
6. Sticks (Hopefully they weren't too large)

In loggits, a game which dates back to Tudor England, a stick would be placed vertically in the ground to be used as a target. Players would take turns throwing their own sticks at the target, and whoever landed their stick closest to the target won. Because King Henry VIII feared that loggits distracted the soldiers from their military duties, it was one of the games, along with all card and dice games, that was banned during his reign.
7. Knives, Target, Wooden Peg (Talking was allowed)

Dating back to the 1620s, in the game of mumblety-peg participants would throw knives into the ground, blade first. While sometimes the knives were aimed at a target, other times the purpose was to lodge the knife in the ground, covering as much of the blade as possible. Losers had to use their teeth to pull a wooden peg out of the ground.
8. Raisin, Bowl of Burning Brandy (No flowers involved)

Watch out for that hot brandy! Originating in Tudor times, this was a popular parlor game in Victorian England. The purpose of snap dragon was to pull the raisin out of the burning bowl of brandy and eat it without being burned. Typically played in the dark, what was the fun of this type of game? Seeing the other players get burned!
9. Coin or Button, Hands (No severed ears here)

Up Jenkins is played by teams sitting opposite from one another at a table. One of the team members would place a coin or button in his hand. When "Up Jenkins" was yelled from someone on the opposing team, the group hiding the coin had to place their hands, palms down, on the table. If the competitors could correctly guess which palm the coil or button was under, they won. If not, they had to pay a forfeit, which usually meant they took a drink.

The hint is in reference to the War of Jenkins Ear, fought between England and Spain 1739-1748.
10. Peashooter, Target (No hint needed!)

Popular in the 1500s-1600s, blowpoint involved participants, typically children, using a peashooter to fire some type of dart, wooden or paper, at a target. Some sources say that it was also an archery competition where arrows were shot through a hollow log at a target.

This reminds me of the modern game of spitball, where the wad is placed in a straw and aimed at some unfortunate target.
Source: Author ponycargirl 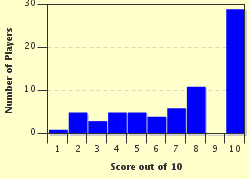