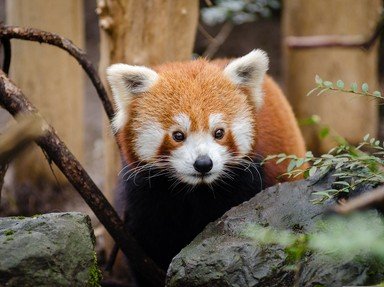 About the size of a house cat, and with much of the same behavior, red pandas are gorgeous animals. Come and visit their display at my zoo.

Quiz Answer Key and Fun Facts
1. The red panda resides in what part of the world?

Red pandas primarily live in parts of China, Nepal, Bhutan and Myanmar, and partly share their habitat with giant pandas. The population is considered disjunct, which means that sometimes the a group of the animals exists separated from the majority. This is true for the red panda as it is also found in parts of India.
2. In what natural habitat does a red panda live in the wild?

Red pandas like cooler weather where there is not a big temperature change from season to season. They like to live in mixed deciduous and conifer forests where there is also plenty of bamboo.
3. Like the giant panda, a red panda only eats bamboo.

Red pandas love bamboo leaves and fresh shoots, but they also will eat berries, blossoms, bird eggs, and the small leaves of other plants. Like the giant panda, they have a projection on their wrists that helps them grasp food.
4. In what scientific family is the red panda?

Red pandas are of the order Carnivors, and the Ailuridae family. There are two subspecies: the Western red panda, and Styan's red panda. At different times the animal has been classified with Procyonidae and Urisidae, however, it has been placed in its own family and is part of the superfamily Musteloidea. Genetic research has shown that there are enough differences between the red panda and its relatives to warrant it being placed in its own family classification.
5. What North American animal is a cousin to the red panda?

The reason the red panda was classified in the family Procyonidae for a time is because it looks so much like racoons. It is also related to skunks and weasels.
6. Which of the following statements best describes the red panda's living arrangement?

The only time red pandas enjoy company is during the mating season. They spend their day sleeping, grooming, patrolling their territory, and searching for food. Young red pandas stay with their mother for about ninety days before leaving the nest; males have little to nothing to do with their baby's upbringing.
7. The red panda is exclusively a nocturnal animal.

Red pandas are both nocturnal and crepuscular, which means they are primarily active at dusk and dawn. They sleep on tree branches or in tree hollows.
8. Because the red panda is not a bear, it cannot be related to the giant panda.

The red panda is very distantly related to the giant panda. Their common ancestor, "Parailurus anglicus" dates back to the Tertiary Period, and there is fossil evidence that the species inhabited the area from Britain to China. In 2004 a discovery in Tennessee also places a panda species in the United States millions of years ago.
9. Which of the following activities are threatening to the existence of the red panda?


Answer: It depends on the region.

In India, for example, the red panda is threatened by both habitat loss and poaching, while in China, where panda-tail-hats are considered to be a good luck charm, the biggest threat appears to be hunting. Whatever the cause, the red panda population is declining - over the past fifty years it is estimated that the red panda population has dropped by 40% in China. Deforestation is a significant problem because it can lead to the breaking up of red panda groups that live in the wild. With less chance of interaction, mating is difficult and inbreeding can lead to extinction in some areas.
10. Besides humans, which of the following animals is a natural predator of the red panda?

Unfortunately, in some areas of China, the red panda is hunted for its fur; bridegrooms may carry the hide, and newlyweds wear hats that are made with the tail for good luck. Martens and snow leopards are also predators. When a red panda feels threatened, it may try to climb a tree, or stand on its hind legs, trying to make itself appear larger, using its claws for protection.
Source: Author ponycargirl 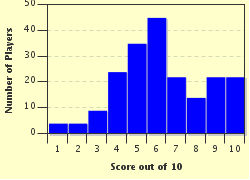