A quiz about some of the flowering plants used to create a perennial border, some common, others not so common. Good Luck!

Quiz Answer Key and Fun Facts
1. This plant, which produces long magenta-violet spikes, can be found in the wild, where it can become extremely invasive and destructive. Varieties grown for home gardens are cultivated to be less invasive. Its name derives from its use as a medicinal herb.

Loosestrife (Lythrum) is an aggressive and invasive plant in the wild, taking over large stretches of land and often choking up streams and small bodies of water. The garden cultivars are less aggressive, but still need a firm hand to keep them under control.
2. This charming perennial has silver-grey foliage and clusters of tiny yellow flowers (hence its name). When the flowers fade, the seed pods resemble tiny silver-dollar plants. Once planted, it should never be transplanted.

"Basket of Gold" (Alyssum Saxatile or Aurinia Saxatile) makes an especially useful and charming rock garden subject. It is quite beautiful in combination with Tulips, which usually bloom at the same time as the Alyssum. The plant is also known as "Golden Tuft".

It forms dense mats, and has a complex root structure that resents being disturbed, so it should not be transplanted or divided. It is best propogated by sowing the seeds which form after the flowers fade.
3. An unusually shaped white variety of this flower is called "Dutchmans Britches". Most people are more familiar with the pink or pink and white varieties. In England, the flowers are called "Lady in the Bath". However in America, they are given a more romantic name.

If the blossoms are turned upside down and pulled open, you can see the "lady in the bath". Left as they are, they are heart-shaped, with a pink or white "drop" between the outer petals (a player from Canada tells me that, in Canada, the blossoms turned upside down tell the story of a broken-hearted prince and the cold-hearted princess he loved.). "Dutchman's Britches" look like a tiny pair of white britches (though I personally don't see anything particularly "Dutch" about them; my mother's generation called them "Lady's Bloomers", which strikes me as more apt).
4. "Shasta", and "Montauk" are cultivated varieties of this common and ever-popular flower, of which the "Ox-Eye" variety is found abundantly in the wild.

Daisies belong to the Chrysanthemum family. "Ox Eye" is the common daisy; "Shasta" is a more refined cultivar (Chrysanthemum Leucanthemum). "Montauk" is a fall-blooming variety widely grown on Long Island, with an almost bush-like habit and attractive, glossy green foliage.
5. This popular flower makes an appearance in the film version of "The Wizard of Oz", and is associated with Memorial Day in the U.S. It comes in various shades of pink and peach, as well as white, though the bright red variety is still the best known. All have the same black center, with its velvety "star". It is illegal to grow one variety in some parts of the world because of its use as a drug.

Poppies are best planted with something like Gypsophilia (Baby's Breath) which comes into bloom just as the poppies are finishing and can hide the rather unsightly appearance they develop thereafter. The Opium Poppy is the variety from which the drug is derived (it was this which made Dorothy, Toto, and the Cowardly Lion fall asleep on the road to the Emerald City in "The Wizard of Oz").

It is illegal to grow this variety in the U.S.
6. The "Blue Bonnet" variety of this majestic perennial, whose flowers grow in tall thick spikes, is the state flower of Texas. It is a member of the pea family, and its name is derived from the Latin word for "wolf".

Lupines form large, pagoda-like spires and come in shades of violet, blue, pink, and yellow. The Texas "Blue Bonnet" variety is especially lovely, forming a sea of blue spires. Although perennial, Lupines are not particularly long-lived, and should be replanted every few years or so.
7. Also called "Blanket Flower", this plant produces flowers with brown centers and jagged-edged petals with yellow edges and orange-brown centers.

Gaillardias can form large colonies and look well grown together with Coneflowers and Coreopsis. Their tawny shades of yellow, orange, and rust are especially evocative in late summer and early fall,
8. Also called "Tickseed", the most common variety of this plant has large yellow flowers with yellow centers and pinked edges. However, there are dwarf varieties with tiny yellow or pink flowers and finely divided leaves.

The larger Coreopsis come in single and double flowered varieties. There are also thread-leaf and lance-leaf varieties.
9. Plants of this family include the florist's Carnation. In the perennial border, you are more likely to find smaller-flowered varieties with silver-grey foliage. They are also known as "Pinks".

The smaller varieties of Dianthus are very useful in rock gardens and at the front of the border. "Sweet William" is a biennial variety of Dianthus, producing only leaves the first year and then flowers the second (and last) year.
10. Daylilies are members of the Liliacae family; what is their botanical name?

Daylilies get their name from the fact that the flowers open only during the day and each flower blooms for one day only (though there is a continuous succession of bloom). They are best planted with an eastern exposure, since the flowers tend to face the sun.
11. Gloriosa Daisies and the wildflowers known in the U.S. as Black-Eyed Susan (in the U.K. this name is given to an orange variety of Thunbergia) belong to this family, named for the shape of their center "button".

Also known as "Coneflowers" because of the cone-shaped buttons in the center. "Gloriosa Daisies" resemble large "Black-Eyed Susans" with a center band of a deep mahogony or rust color.
12. Aquilegias are beautiful, intricately shaped flowers; they come in a variety of colors from yellows and oranges to blues and violets and frequently combine more than one shade of color in the same blossom. Their Latin name means "eagle". What is their more common name, which means "dove"?

The Columbine flower is in two parts, one fitting into the other like a skirt and petticoat. The most beautiful varieties have a "skirt" of one color and a "petticoat" of the same color in a lighter shade.
13. Michaelmas Daisies, which look especially charming combined with Goldenrods, are perennial members of this family, whose name means "star" in Greek.

"Michaelmas Daisies", so-called because they bloom around "Michaelmas" in late September, have clusters of tiny, daisy-like flowers in shades of pink, blue, and violet. They also come in white.
14. This unusual perennial produces silvery, flocked foliage and flowers of a contrasting deep magenta-purple (though cultivated varieties come in a variety of shades, from white to red). It is sometimes found in the wild.

Rose Campion is not a member of the Rose family; the name derives from the color of the flowers. In some zones, it grows as a self-seeding biennial rather than a perennial.
15. Plants of this type include "The Pearl" (which looks rather like "Baby's Breath"), "Coronation Gold", and the beautiful "Moonshine", which combines silver-grey foliage with flat heads of pale yellow flowers. In the wild, its colors are usually white or magenta with very fine, feathery foliage. Because of its medicinal use, it is sometimes known as "Nosebleed". 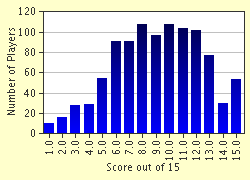 Related Quizzes
1. The Language of Flowers Easier
2. Flowers, Mother Nature's Perfume! Average
3. Alpine Flowers Easier
4. Where Have All The Flowers Gone Easier
5. Which Flower Am I? Average
6. Spring Flowers to Give us Hope Average
7. Nature Imitating Nature Average
8. A Beautiful Winter Garden Average
9. Join Me in My Flower Gardens Average
10. Can I Eat That Garden Plant? Average
11. They're All Stars! Average
12. Foxgloves, Fairy Rings and Other Magical Plants Average


Other Destinations
Explore Other Quizzes by jouen58