Every year, millions of people engage in recreational boating on U. S. lakes and rivers. This quiz covers some of the basics that every boat owner should be aware of.

Quiz Answer Key and Fun Facts
1. The United States Coast Guard (USCG) has established specific safety items that must be on board every recreational boat, such as having a life preserver (jacket/vest) for every passenger. Which of the items listed below is usually NOT required?

Although not required, having a compass, map or GPS can be helpful. Also, if out at night, there are specific lighting requirements that must be obeyed.
Besides the USCG regulations, each U.S. State may also have specific regulations a boater should be aware of.
2. Unlike cars, boats and planes move around a vertical axis that controls the entire vessel. This movement or axis is referred to as:

Yaw can be used as a verb or a noun but it generally refers to the movement (oscillation) around the vertical axis in boats.
On a boat, pitch is a front to back movement and roll is side to side. I just put shimmy in to fill out the options.
3. Many boaters usually carry a signal flag to let other boaters know if they are in distress. This flag is approximately 3 ft by 3 ft and has the following attributes:


Answer: Orange flag with a black square and a black circle on it

A black square and a black circle on an orange flag means the boaters are in distress and need help.
A solid red or orange flag means a water skier is in the water. A red flag with a white diagonal stripe means that a scuba diver is in the area. I invented the white flag with a red triangle to fill out the choices.
4. If someone was to say that they are going 'aft', where are they going?.


Answer: Going toward the rear of the boat

If you are going aft, you are heading toward the boat's stern or rear. The opposite of aft is fore or forward (going toward the front of the boat).
5. Where is the 'bilge' on a boat?


Answer: The lowest compartment at the boat's bottom

The bilge is where excess water collects at the bottom of the boat. Hence you have bilge water, that is removed by operating the bilge pump or removing the bilge plug (when on land).
The back of the boat where the outboard is attached is called the transom.
6. When traveling in the main body of a (reasonably small) lake, which direction should you be going?

In water ski areas and other main parts of an average lake, the boater should travel in a counter clockwise direction. Note that this also means that boats travel on the right side (as do cars in the US).
7. If someone were to say they are on the 'starboard' side of the boat, where are they?


Answer: On the right side when facing forward

Starboard is on the right (when facing forward) and port is on the left. The bow is the front of a boat and the stern is the rear.
8. When running a boat through the water, it will create waves on the surface. The faster you go, the bigger waves you will create. What is this water disturbance known as?

Around marinas and other public or congested areas, you will often see a "No Wake" sign when boating. You should never go faster than 5 MPH in these areas. And when passing others on the lake (especially smaller boats) you should be careful to limit the size of your wake.
9. For the past decade, the US has averaged between 500 and 700 recreational boating deaths a year, the vast majority from drowning. According to the USCG, what percentage of the drowning victims did NOT have a life vest on?

Yes, more than 4 out of 5 boaters who drowned did not have their life vests on. The USCG estimates that 80% of these victims would have been saved had they been wearing their vests. Always wear your vest!
10. Many people prepare a checklist before they go boating as there are many important items that should be thought about. Which simple item that should be on that checklist is often overlooked, directly contributing to the sinking of many small recreational boats?


Answer: Make sure the bilge (drain) plug is in

It is important to stay aware of the weather conditions as wind and rain can cause many problems when boating. And of course you do not want to run out of gas or have your battery go dead. But not putting in the bilge plug and having your boat fill up with water is much worse, as this can easily sink you.
Surprisingly, the USCG states that this is one of the most common reasons that recreational boaters find themselves in a distress situation.
Source: Author HarryTripper 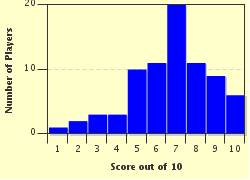 Related Quizzes
1. Ghost Towning in the United States Easier
2. Into the Woods Easier
3. Take a Hike! Easier
4. Hiking in the Desert Wind Easier
5. Left to Your Own Devices Average
6. Make My Day Average
7. It's a Jungle Out There! Average
8. Increasingly More Dangerous Outdoor Activities Average
9. Gravity Getting You Down? Average
10. Cemeteries Can be Fun Average
11. Something About Telescopes Average
12. Hiking around Britain Average


Other Destinations
Explore Other Quizzes by HarryTripper