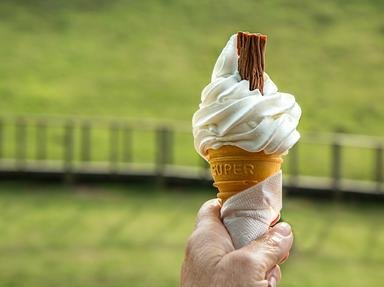 Forget the traditional chocolate, vanilla, and strawberry. Match these luscious ice cream flavors to my descriptions of them. Well, I think that they're luscious. You can make up your own mind about that.

Quiz Answer Key and Fun Facts
1. Some love it, while others hate it. Could this help wake you up in the morning?

There is also mocha ice cream, which contains chocolate as well as coffee flavors.

Coffee ice cream is normally light brown. It is made from real coffee, which is dark brown. (Coffee with no cream or sugar is often called "black", but it's still actually dark brown.) When the dark brown mixes with the white cream, then the natural result is a light brown.

As a coffee lover, I adore coffee ice cream. I would marry it if I could. My dad, however, hates everything related to coffee, even the ice cream. Oh, well! More for me!
2. When you take a spicy Christmas or holiday drink and turn it into ice cream, this is what you get.

Even though people drink eggnog, it is very thick and is technically a custard. Alton Brown makes an interesting comment regarding this. He basically says that eggnog, as a mixture of milk or cream and eggs, could be ice cream, except that it usually contains too much alcohol to freeze.

While eggnog traditionally contains alcohol, some of us do prefer our eggnog to be non-alcoholic. In addition, most eggnog flavored ice cream doesn't contain any alcohol.
3. I am personally thankful for this sweet and orange stuff.

The "thankful" clue comes from the fact that pumpkins and pumpkin products, such as pie, are popular around Thanksgiving-time in America.

Every autumn and winter, I personally look forward to the seasonal ice cream flavors, such as pumpkin, eggnog, peppermint, and others. The weather might be cold, but the ice cream is still delicious!
4. Often pretty in pink, this might also remind you of a Christmas or holiday candy.

Okay, so yes, I told you to forget chocolate ice cream in the introduction. I meant plain chocolate!

Spumoni originated in Italy. While chocolate is common, Wikipedia says that spumoni may sometimes be made with vanilla instead of chocolate. Interestingly, if made with vanilla (white), pistachio (green), and cherry (red) ice cream, the colors would then match the Italian flag's colors.

Neapolitan is layered with three flavors as well, but they are vanilla, chocolate, and strawberry.
6. This is inspired by a fun carnival treat! It is usually pink and/or light blue.

Some countries, like the U.S. and Canada, call it "cotton candy". However, other countries use different terms for it. For example, Britain uses "candy floss".

Popular colors for cotton candy are pink and light blue. Likewise, the ice cream is often pink, blue, or a mixture of the two colors. The Ben and Jerry's variation, however, is white with sprinkles in it.
7. It's similar to rocky road, but without the nuts.

Chocolate ice cream was created (in seventeenth-century Europe) before vanilla ice cream. I thought that vanilla was first, but apparently not.

When I first heard about "hot cocoa (or hot chocolate) ice cream", I thought it sounded silly. The title is basically an oxymoron. It tastes good, though.
8. If you are a fan of cookies and cinnamon, you might appreciate this one.

There are different ice cream flavors made with cookies, such as chocolate chip cookie dough, cookies 'n cream, and even gingerbread ice cream.
9. Maybe this ice cream flavor would be especially good for someone's birthday.

Red velvet cake ice cream is based on red velvet cake, which is a version of chocolate cake but colored red. It is often frosted with cream cheese frosting.

Personally, I don't even like regular chocolate cake that much (I like everything else chocolate, but not really cake); however, there is something about red velvet cake that I just find delicious.

The ice cream seems to be either red, white, pink, or a mixture of such colors, depending on the creator.

If someone likes the cake, then he or she should try the ice cream!
10. You can dunk chocolate cookies in milk or you can have this.

Cookies 'n cream became one of the best selling flavors of ice cream in 1983.

It is often made with vanilla ice cream, but sometimes it is made with other flavors, such as mint or even coffee ice cream.
Source: Author Ceduh 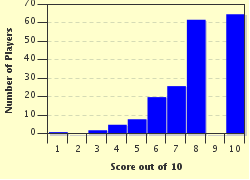 
Other Destinations
Explore Other Quizzes by Ceduh