I spent a while learning how to cook Thai food in Thailand, and I wanted to share some of the fuits, vegetables, nuts, and herbs that make their home in this delicious cuisine.

Quiz Answer Key and Fun Facts
1. Which of the following are NOT used in Thai cooking?

An island in the Gulf of Thailand, Ko Samui, was once the largest exporter of coconuts in the world.
2. Which citrus leaves are often shredded and added to Thai soups, salads, curries, and stir-fries?

The Kaffir lime is actually not a lime at all, but a citrus subspecies closely related to the lime. It has a pitted skin and tough, very fragrant leaves.
3. This vegetable is found in several different varieties in Thai cooking, and is a staple of green curries.

From pea-sized to golfball-sized to regular purple, eggplant is common in many Thai dishes.
4. This sweet-smelling perennial is integral in Thai cooking, sometimes bashed and put into soups, sometimes finely minced into stirfries and curries.

Lemongrass is bashed to bruise it and release its natural citrus-like juices. The oil from lemongrass, citral, is also used as a mosquito repellant (citronella) across the globe.
5. This oddly-named food is a relative of ginger, and is found in soups all over Thailand. However, sometimes it is not meant to be eaten!

Galangal is a good digestive aid, related to other rhizomes like ginger. When sliced thickly, it is not meant to be eaten, just as a flavoring in the soup.
6. This yellowish rhizome gives the characteristic color to Thai curries.

Turmeric is dried, finely ground, and added as a powder to curries all over the world (not just Thailand).
7. Thai cooks often use the "bird-eye" variety of what produce in their sauces, curries, and stirfries?

These are the hottest of peppers found in Thai cooking... cooks can add as many as they feel like, to really roast the diner!
8. This herb is very common in Thai cooking. There is even a variety named after the country itself!

Thai basil is sweet smelling, and is often thrown whole into stifries and fried up along with the dish. It is sometimes added late to the dish, to be meant as a highlight flavor or garnish.
9. Almost there! This fruit is oddly shaped, with a deep brown color. Its juice or pulp is used in a lot of different dishes. Beyond food, it is also used to color some Asian temples' brass fittings!

Tamarind is a pod-shaped fruit, grown for its juice, which sweetens Pad Thai and numerous other dishes.
10. Which of the following is NOT a fruit found in Thailand?

Strawberries are now grown in the highlands near Chiang Mai, part of a government program to persuade farmers from growing opium poppies. The durian is a spiky, foul-smelling fuit, and mangosteens are deep purple/red with white flesh inside.
Source: Author doughboy742

This quiz was reviewed by FunTrivia editor Bruyere before going online.
Any errors found in FunTrivia content are routinely corrected through our feedback system.
Most Recent Scores
Today : Guest 84: 9/10
Jan 19 2023 : Guest 124: 5/10 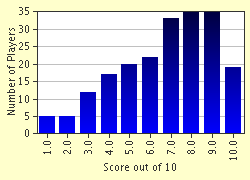 
Other Destinations
Explore Other Quizzes by doughboy742