They're Thin, They're Round, They Grow Underground Quiz

They're root vegetables. How do you eat yours?

Quiz Answer Key and Fun Facts
1. It looks like a white version of its smaller relative, the carrot, but has a sweeter taste. Which root vegetable is this?

Parsnips are native to Europe and have been cultivated since ancient times; the Romans apparently believed they had aphrodisiac properties, and they were used as a sweetener before the importation of cane sugar into Europe.

Their sweetness, which is enhanced by frost converting the vegetable's starches into sugars, gives parsnip wine (yes, it does exist!) a sherry-like taste.
2. It is round and a purplish-red colour, and can be enjoyed raw or pickled. It is also the key ingredient of borscht, a soup popular in Eastern Europe. What root vegetable is it?

Beetroot, or garden beet in North America, is the variety of Beta vulgaris cultivated for culinary purposes. It contains a red dye which is used as food colouring in products such as strawberry ice cream and tomato paste, and was also used in the past as a type of hair dye.

In some countries, such as Australia, hamburgers are served with slices of beetroot inside.
3. Scientists know it as Brassica rapa, and cooks know it as a round white vegetable with a purplish tinge and edible leaves. There is a British fairy tale involving an old woman pulling a giant one out of the ground. Which root vegetable is this?

Turnip leaves (known as turnip tops in the UK) taste similar to collard greens; Chinese cabbage is a variant of Brassica rapa developed specifically for its leaves.

Salgam sayu, meaning 'turnip juice', is a popular drink in Turkey - it has a dark red colour, and is made of pickled purple or black carrots and flavoured with the juice of fermented turnips.

Baby turnips can be eaten raw, as part of a salad, but do not keep as well as their bigger relatives.
4. Its English name sounds like a term of endearment. The most common variety has orange skin, though some varieties are yellow, red or even purple, and Americans may find it on their Thanksgiving tables. Which root vegetable is this?

It is the state vegetable of North Carolina, and is a popular Thanksgiving side dish in the US, either mashed or prepared with sweet ingredients such as marshmallows or molasses.

Like beetroot, the juice of the sweet potato can be used as a dye. Purple sweet potato extract, for instance, can be used as a food colouring that turns the food pink, red or purple, depending on its acidity. Red sweet potato juice can be mixed with lime juice to make a dye for cloth.
5. Its skin is purple and yellow, it's a cross between a turnip and a cabbage, and its leaves are edible. In the US and Canada, it is known as a rutabaga, but what Scandinavian-sounding name is this root vegetable also known by?

Other names for the swede / rutabaga include 'neep' in Scotland, and 'Swedish turnip' in the US. 'Neeps and tatties' is a Scottish dish traditionally served on Burns Night, featuring mashed swede and potatoes, and served with that 'great chieftain o' the puddin' race', the haggis.

At the Ithaca Farmer's Market in New York, there is an annual International Rutabaga Curling Championship. It began in 1997, after bored vendors started a game using any produce they had to hand, including frozen chickens. Nowadays, only rutabagas are permitted, and contestants are encouraged to bring their own, though the market does supply its own rutabagas. The use of turnips is not permitted.

Before the introduction of pumpkins to Europe, rutabagas were carved to make lanterns to defend households from evil spirits on All Hallows' Eve. The idea comes from the tale of Stingy Jack, a manipulative drunkard who was forbidden from entering both Heaven and Hell after repeatedly deceiving the Devil and living a lifetime of sin. He was forced to wander the earth, using a hollowed turnip with an ember inside it for a light (hence the name 'jack-o'-lantern').
6. It is the root of a plant with white flowers. Grate it, and you'll discover that it tastes very bitter! Which root vegetable is this?

Why does horseradish become bitter when you grate it? It's because it contains a substance called sinigrin. When horseradish is exposed to air via grating, the sinigrin is broken down by enzymes into mustard oil, giving the horseradish a pungent taste if not eaten immediately.

Grated horseradish forms a part of the traditional seder plate at the Jewish festival of Passover. It is supposed to represent the bitterness of slavery, and it is customary to make a 'Hillel sandwich' of two bits of matzo, with horseradish and charoset (a sweet mixture - I make mine with apples, kosher wine, walnuts, dried fruit and cinnamon). A bottled variety is tinted red with beetroot juice.

Horseradish is often used as a substitute for the wasabi plant in the green 'wasabi paste' served with sashimi, as actual wasabi plants are harder to come by. The real thing is traditionally grated on a sharkskin grater called an oroshi, and is said to have anti-bacterial properties.
7. This ugly vegetable originated in the Mediterranean, is covered in bumps, and it can be used as a thickener in soups. Despite its name, it is not actually long and green. Which root vegetable is this?

Celeriac might look nothing like celery, being fatter, bumpier, and less green, but it is actually a type of celery. Its nicknames include 'knob celery', 'root celery' and 'turnip celery'. The other big difference is that celery is a stalk rather than a root.

In terms of nutrition, celeriac is low in calories, and considerably less starchy than other root veggies. It is also a good source of vitamin K.

In France, celeriac is used to make celeri remoulade, a mayonnaise-based condiment with pieces of celeriac floating in it. It's often served in charcuteries (delicatessens) as a side dish, and the chopped celeriac gives it a coleslaw-liked quality.
8. This one is a bit trickier. This vegetable is a staple of Japanese cuisine, and it is also known as mooli, lo bok, or white radish. Some varieties are shaped like carrots, and others like turnips. Which root vegetable is this?

The carrot-like version of daikon is known as aokubi-daikon, while sakurajima daikon looks more like a turnip, with some examples weighing up to 45kg (99lb). It is named after the Sakurajima volcano in Kagoshima Prefecture. Long White Icicle is a variety of daikon that can be grown in the UK.

In Japanese cuisine, daikon can be grated, carved into a table decoration (like the red radish), or dried to make kiriboshi daikon. It can also be pickled to make side dishes such as takuan, which is served with rice, or bettarazuke, which is sweeter and stickier.

In Korea, daikon is used in some varities of kimchi, a fermented vegetable dish. One variety is nabak kimchi (red water kimchi), which is commonly eaten in spring and summer. Ground red pepper or chili powder gives it a red or pinkish colour. In China, fried mooli cakes are a Chinese New Year snack.
9. Its Latin name is Manihot esculenta, and it is also known as yuca, manioc and balinghoy. It is a hardy plant which can grow in harsh conditions, and a staple food in parts of Africa, Southeast Asia and Central and South America. Which root vegetable is this?

Manihot esculenta is the bitter variety of cassava, and must be carefully prepared (by cooking, soaking and/or drying) before being eaten, otherwise it is poisonous. One major advantage of growing bitter cassava is that its toxic qualities deter thieves, both human and animal, from eating the crops. Manihot dulcis, a sweeter variety of cassava, can be eaten raw.

Tapioca is a starch that comes from cassava, used as a flour, thickener and pudding ingredient (Brits of a certain age may have eaten tapioca pudding at school). The 'bubbles' in bubble tea are small tapioca balls.

Cassava is not just a food - it can also be used as a laundry starch, and a biofuel. Research into its properties as a biofuel has been carried out in China, Vietnam, Nigeria - the world's leading producer of cassava - Thailand and Brazil. Fermented cassava starch produces ethanol, which can be used as a petrol substitute in converted motor engines, and mixed with petrol for normal motor engines.
10. Fried, mashed, boiled, sauteed, chipped, roast, baked...there are so many ways of cooking this tuberous vegetable. You can find it in snack-sized bags, in cartons at a fast food restaurant, or covered in cheese and beans (or whatever else your topping of choice might be). Which vegetable, with a Latin name of Solanum tuberosum, is this?

If you've ever seen the 'Toy Story' movies, you might be familiar with the Mr Potato Head toy. Although Mr Potato Head these days is a plastic potato with various attachable body parts, the original toy - a kit consisting of different eyes, noses and so on - was intended to be used with a real potato. Inventor George Lerner came up with the idea after making dolls out of potatoes, using other fruits and vegetables to make their faces. Although the idea failed to take off in wartime as it was considered a waste of food, Lerner discussed the idea with the Hassenfeld brothers (who would later found Hasbro), and the toy went on sale in 1952. The plastic potato became part of the kit when parents started complaining about their kids playing with rotting vegetables!

The potato originated in the Andes, and its name comes from the word 'batata'.

One of the greatest enemies of potato farmers everywhere is Phytophthora infestans, commonly known as 'potato blight'. Not only did it cause the Great Irish Famine of 1845-1846, but it also caused the deaths of thousands of Germans from starvation during the First World War. This was because of a lack of copper sulphate, a common pesticide at the time, due to Germany's entire supply of copper being used for weapon production. During the Cold War, both sides briefly considered using it as a biological weapon (presumably to cause mass starvation and thus weaken the enemy).
Source: Author Kankurette 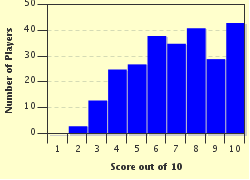