All they need to really show their star qualities is to be given a chance to shine - so here it is! Viva Las Vegetables!

Quiz Answer Key and Fun Facts
1. The name for which peppery salad vegetable literally comes from the Latin word for 'root'?

The humble radish is mentioned in numerous literary works, including works by Sir Francis Bacon, Mark Twain and Alexandere Dumas.
2. Found in Las Vegas as in the kitchen, what is the correct French term for a dice of onions, carrots and celery traditionally used to add flavour to stock?

Usually the proportions are around fifty percent onions and twenty-five percent each of carrots and celery. Mirepoix can be lightly sauteed before adding to the stock, or added raw.
3. Russian Roulette....which soup associated with Poland and Russia is made from beetroot?

Schi is a cabbage soup; Rassolnik is made from pickles, usually cucumbers; and Ukha is a fish-based soup with lots of spices added.
4. Which leafy vegetable, beloved of Popeye, would give you carotenoids, minerals, folate, fibre, iron, and vitamins A, B2, B6, B1,C, E and K - and the strength to spin the roulette wheel?

I know, bad joke..."spin"ach! Though not as rich in iron as Popeye thought, it's a nutritious veg that shouldn't be neglected.
5. Add a letter to the apparatus used to play blackjack to find the name of another leafy vegetable, similar to spinach. It is sometimes prefaced by the word 'Swiss'.

Chard is also called Silver Beet, leaf beet,and seakettle beet and can have white, yellow or red stalks. All the leafy part is a dark green regardless of the stalk colour.
6. Which vegetable is known to have its 'roots' in Queen Anne's Lace?

Queen Anne's Lace is known in some places as 'Wild Carrot' and when crushed, the roots have a strong smell of carrots. Careful, though, not to mistake hemlock for Queen Anne's Lace, which has a similar appearance, but a quite different smell.
7. Desiree, Russet, Pontiac; what do these potatoes have in common with tokens used in a game of poker?

Chips - aka french fries! All listed are varieties of potatoes suitable for chip making.
8. I have a lot of favourite veggies, but I think my favourite vegetable to eat roasted is pumpkin. Lady Flo Bjelke-Petersen, wife of a former Premier of Queensland, was famous for using pumpkin in what baked good?

You can find her recipe here: http://www.abc.net.au/queensland/stories/s1143809.htm
9. Which vegetable, often used in the Southern USA in soups and stews, is in the same family as the Rose of Sharon, the national flower of Korea?

They are both in the Mallow family, a very large plant group, which includes the Hibiscus, of which the Rose of Sharon is one.
10. In folklore, which vegetable was used to relieve earache by (usually) cooking it and holding the warm vegetable against the ear?

There were various other things said to help, too, including putting a garlic clove in the ear, or applying oil of cinnamon to the ear cavity! However, while a hot onion on the outside of the ear may provide relief, I'm not sure I'd be trying some of the other 'remedies'!
Source: Author VegemiteKid 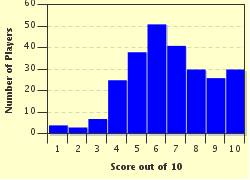 Related Quizzes
This quiz is part of series Foodies' Delight:

Friends, feast on a few of my food offerings!