Tea is one of the most common drinks in the world, but the methods of preparing it varies around the globe. Do you know the facts?

Quiz Answer Key and Fun Facts
1. One of my favorite drinks to drink in the summertime is sweet sun tea. The reason the tea is called sun tea is due to its special preparation. In what way does one prepare sun tea?


Answer: Putting a glass container of water and tea leaves on the porch

To make sun tea, a simple closed glass container is placed outside in direct sunlight for several hours to brew the tea. Tea leaves, fresh mint leaves, and instant tea in tea bags can all be used in the making of sun tea. To make the sun tea sweet, I like to add simple syrup (a candy base created by boiling sugar in water on the stove) to make it resemble southern sweet tea.

Unfortunately, sun tea cannot be made in cold weather, so an alternate method is to place the glass container in a sink or tub full of hot water, though the tea never turns out quite as tasty as brewing it outside.
2. In the world of Chinese tea, what exactly is a "gaiwan"?


Answer: A lidded bowl for brewing and drinking tea

A gaiwan is a special device that is used to both brew and drink Chinese tea. The special cup (which means "lidded bowl" in traditional Chinese) consists of a small bowl, a lid, and a saucer. The tea is brewed in the bowl, sometimes with the lid and sometimes without, depending on the type of tea being brewed.

Then, traditionally, the gaiwan is used to drink the tea as well. All three parts are held while drinking from the vessel; which can be difficult to master, especially with the liquid being so hot.

The lid also provides a means of keeping the leaves from entering the mouth while drinking the tea within. The gaiwan has been around since the Ming Dynasty, though modern gaiwans are much smaller and use more leaves to brew than when it was first invented.
3. The caydanlik is a special double-boiler type tea kettle used for a specific type of tea. Which kind of tea, popular in one of the world's foremost tea drinking countries, is made with this special kettle?

Turkish tea is traditionally prepared in a caydanlik, a two-kettle type instrument. The caydanlik contains water in the larger lower kettle, and tea is brewed with a small amount of water in the upper chamber. When serving, the strong, concentrated black tea from the top portion is poured into special glasses, and the lower half of hot water can be used to weaken each individual cup of tea to the drinker's desire. Cubes of beet sugar are used to sweeten the tea, which is typically drunk without milk of any sort.
4. After preparing a delightful batch of tea in your Yixing clay pot, it is time to wash the vessel. Which of these is the best way to clean this special tea kettle?


Answer: Rinse it with clean water and allow it to air-dry

The Yixing clay teapot is a very special device used to create tea. Unlike many western tea kettles, this special pot should not be used with boiling water to brew the tea. Water is allowed to cool a bit before being poured into the teapot, and the brewing process is typically shorter than most other methods. Tea leaves can be used several times (in fact, the first batch is often brewed simply to clean the pot and cups and is not consumed). The tea is typically drunk in small cups so the liquid cools fast but can be finished before it gets cold. This means a lot of refilling your cup.

To clean the Yixing clay teapot, it is important to never use soap or abrasives. The teapot absorbs some of the flavors of the tea each time it is used to brew, so using soaps and abrasives ruin the best part of these clay pots! A true tea lover only brews one kind of tea in each Yixing clay teapot for this very reason; just like cast iron, the flavors from previous uses will forever be soaked into the vessel.

Interestingly, the Yixing clay teapot was featured in the second season episode of "Sherlock", entitled "The Blind Banker".
5. Making masala chai does not require any fancy vessels or instruments, but it is made slightly differently than other teas. Since the tea is most often mixed with milk, it is often brewed directly into the milk. In India, which milk is typically used to brew masala chai?

Masala chai is prepared by boiling all the ingredients together and straining out the solids from the drinkable tea (this method of brewing is called decoction). Unlike other milk-based teas, masala chai is often brewed into the milk directly with the water.

Many different sweeteners can be used, and certain kinds of sweeteners bring out the flavors of the chai spices in the tea. Sometimes, condensed milk is used as both the milk product and the sweetener. Methods of preparation to vary: some put every ingredient in near the beginning and brew it all together, while others brew the leaves in the water and milk and then add the chai spices later.
6. In many northern African nations, such as Morocco, tea is poured from varying distances from the drinking cups. What is the reason for doing this?


Answer: To create a foam and alter the flavor of the tea

As odd as it may sound, pouring tea from varying distances can indeed affect the flavor. The distance from the cups determines the amount of aeration within the tea, and also creates a foam on the top of the glass. It is possible that pouring the tea from such heights has a secondary purpose; the aeration caused by this process also cools down the tea quicker for immediate consumption.
7. Teh tarik is a popular Malaysian drink (it's even the national drink) that is thick and frothy. Which of these special ingredients is used in the preparation of the tea?

Teh tarik is a milky tea drink found commonly throughout Southeast Asia, and originating in Malaysia. The tea is brewed and combined with condensed milk, as the tea is quite acrid and best paired with the thick, creamy, sweet condensed milk. The drink is poured between two vessels several times at varying heights, which not only cools down the tea to drinking temperature, but it helps mix the tea with the condensed milk and creates a thick froth on the top.

The process of pouring the tea in this manner is known as 'pulling' (teh tarik itself literally means "tea pulling").
8. Brewing tea typically takes some sort of teapot or kettle, but what about thicker teas which require a blender or wooden churn? Which of these teas is stew-like in thickness?

Tibetan butter tea is a typical daily drink in Tibet, and is made with yak's butter and salt. The drink is, preferably, made by boiling tea leaves in water for half the day, skimmed, and poured into a container with the yak's butter and salt, which is then shaken or churned. The mixture is churned until it becomes slightly purple and thick, and then poured into clay teapots. Unfortunately, this method is not always easily accessible. The solution is to use tea bags to brew the tea, whatever butter you can find at your local market, and a blender to act as the churning device. Of course, it won't taste like traditional yak's butter tea, but it will still get the desired affect.

Don't knock it until you've tried it!
9. Chifir' is a tea that is brewed by simply placing the leaves on top of water and letting them sink. While drinking the bitter drink, some often hold the sweeteners in their mouth as they sip the liquid slowly. Where is this drink typically brewed?

Chifir' is a very strong, dark tea that is prepared in Russia. The bitter, acidic tea is brewed by pouring the leaves or putting the teabags on top of boiling water and letting it brew until all the leaves have sunk to the bottom of the pot. The tea is usually drunk with milk and sweeteners to cut down on the extreme bitterness and acidity (though some thrill-seekers may prefer to drink the tea black). I have discovered that I am too wimpy to ever try this tea; it must be sipped because the tea can cause vomiting if swallowed too quickly.
10. The tetsubin is a Japanese vessel used for boiling water and pouring it for many uses, such as tea making. Traditionally, the tetsubin is heated in what fashion?


Answer: Over a charcoal fire

If you can boil water with a frozen preparation, you have my admiration. The tetsubin is a traditional Japanese cast iron pot that is heated by suspending it over a charcoal fire. Though the tetsubin were popular for centuries, during the 19th century, infused tea became more popular and the use of tetsubin diminished, since the pot is used for boiling the water but not actually brewing the tea itself.

In modern times, tetsubin are still used, though not always as simple water boilers over an open fire as they were used originally.
Source: Author salami_swami 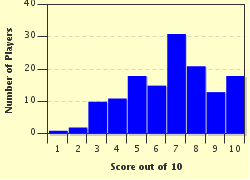