Here are some of the more commonly misspelled words in the English language. Can you pick out the correct spelling?

Quiz Answer Key and Fun Facts
1. This word, a synonym for graveyard, has its origins in the Latin word coemétérium and the Greek word koimétrion, meaning "a sleeping place."

An easy way to remember how to spell it, is to remember it contains all e's. Stephen King certainly didn't help those spellers out there with his novel "Pet Sematary."
2. How do you spell the word which has various meanings including "to oblige" and "to provide with a room"?

Just remember, this word is big enough to "accommodate" two c's and 2 m's.
3. This word, which means "grossly irreverent toward what is held to be sacred", is often misspelled due to its association with a more common term.

"Sacrilegious" is often misspelled due to its association with the common word "religious." An easy way to remember how to spell it is to simply switch the "e" and the first "i" in religious and add "sac" to the front.
4. This word, meaning "steady persistence in a course of action" is often mispronounced, leading to incorrect spellings.

You will often hear people pronounce the word like there is an extra "r" in the middle of the word (i.e. 'pur-sur-veer-uh ns' rather than the correct pronunciation of 'pur-suh-veer-uh ns').
5. Defined as "to cause confusion and shame to" or "make uncomfortably self-conscious."

The quandary of whether to use 2 r's applies to this word as it does to many others. Interestingly, "Embarras" is a river in the state of Illinois.
6. Another commonly misspelled word due to variant pronunciations, this word means "in reduced size or scale".

Although 'min-uh-cher' is an acceptable pronunciation of the word, it often causes people to leave out the second "i" and misspell the word.
7. Meaning "from time to time" or "now and then", how do you spell this commonly misspelled word?

Occasionally, I find myself adding in a second "s" to this word.
8. One definition of this word is "to place in a mental institution or hospital" as in "he was _____ to Bellevue due to severe mental illness".

Many people forget to add the extra "t" to commit to get committed. The spelling becomes a little more difficult when you take into account the fact that the word "commitment" does not add a second "t".
9. Unless you've actually seen this name for the flower native to Mexico, Euphorbia pulcherrima, it can be very difficult to spell. The red variety is commonly seen during Christmas time.

Based primarily on an urban legend in which a child died from apparently eating a poinsettia leaf, there is a common misconception that the plants are toxic. While other plants of the spurge genus are toxic, the poinsettia is not, other than possibly causing allergic reactions in some individuals.
10. "I am pleased to make your _____." Please spell the word that fills in the blank and which means "a person known to one, but usually not a close friend."

"Acquaintance" can also means someone's knowledge in a particular subject area due to experience, study, etc. "Einstein had a particular acquaintance with scientific theory."
11. Please don't get sick or queasy trying to spell this word often synonymous with the first trimester of pregnancy.

Pregnant women sometimes suffer from nausea or morning sickness during the first trimester. While it is called morning sickness, it can actually occur at any time of the day. It is often worse in the morning, however, due to lower blood sugar levels when one wakes up from a night of sleep.
12. Those of you from Egypt should be able to spell this word used as the title for ancient kings.

I'll admit, I'm not sure I knew how to spell this word until I made this quiz. Either way, the term "pharaoh" was originally used as a term for the king's palace and meant "great house." However, it was also used to refer to the kings of ancient Egypt as well, including Amenhotep and Tutankhamun.
13. My grandmother just turned 70 years old, so she qualifies to be called a _______ with regards to her new age.

With life expectancies at birth approaching 80 and above in most developed countries, life in one's 70s is more active than ever.
14. You might call me this word, a synonym for cleverly inventive, for writing such a creative quiz.

Okay, I'll stop tooting my own horn. But even the best spellers among us can often have a rough time with the distinction between the spelling of genius and ingenious.
15. How about a science term for all your meteorologists out there. How do you spell the temperature scale we use in the United States where water freezes at 32 degrees?

The Fahrenheit temperature scale is named after German physicist Daniel Gabriel Fahrenheit. In order to convert Centigrade or Celsius temperature into Fahrenheit, use the well-known formula F = 1.8 x C + 32.

All definitions in quotation marks are from www.dictionary.com.
Source: Author wahoowa94 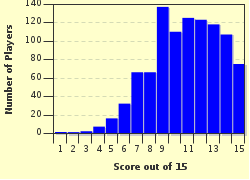 
Other Destinations
Explore Other Quizzes by wahoowa94