Answer: being in charge


Answer: his own appearance

When Sir Walter isn't admiring his own looks, or Elizabeth's, he's lamenting how frightful everyone else is looking.
7. Harriet Smith keeps __________.

She falls for Robert Martin, Mr. Elton, and Mr. Knightley. Finally she marries Mr. Martin, after all. Emma thinks Harriet's in love with Mr. Frank Churchill, but it's not so.
8. Mrs. Jennings loves __________.

Mrs. Jennings turns out to be very good-hearted even though she's kinda vulgar.
9. Willoughby loves __________.

Tom is always telling anecdotes about his many, many friends.
Source: Author robynraymer 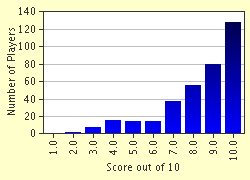