This quiz is about Jane Austen books.

Quiz Answer Key and Fun Facts
1. What is the name of the main character in "Persuasion"?

Anne Elliot is 27 and a spinster. She was engaged to Captain Wentworth when she was younger but was persuaded by her friend Lady Russell to break off the engagement because he was poor.
2. What is Fanny Price's relationship to Edmund in "Mansfield Park"?

Although cousins, Fanny and Edmund fall in love.
3. In "Pride and Prejudice" who is the priest that asks Lizzy to marry him?

Lizzy rejects Mr Collins' proposal to marry though because she doesn't love him. I understand why. He is so creepy.
4. Which teen movie is based on "Emma"?

Alicia Silverstone's character Cher represents the character of Emma in "Emma". They are both spoiled, rich and selfish.
5. "I rode through the rain!" Which movie of the book is this quote from?

Mr Knightley says this to Emma when he is about to propose.
6. Which novel was Jane Austen's first major novel published?

Even though this was not the first novel she wrote it was the first one to be published. It is about three sisters, Elinor, Marianne and Margaret, and the trials and tribulations of their life.
7. Which novel was originally called "First Impressions"?

It was changed to "Pride and Prejudice" in 1813 because the novel is about the character's prejudices against other characters.
8. In which novel does Mr Darcy appear?

Colin Firth plays Mr Darcy in the movie. Oh, what a honey he is!
9. Who is the man that Emma marries in "Emma"?

Mr Knightley is Emma's sister's husband's brother. Got that? So he is kind of like Emma's brother-in-law. He is almost 17 years older than her.
10. Whom does Jane Bennett marry? 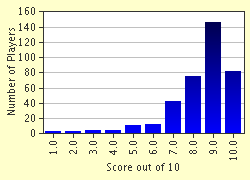 
Other Destinations
Explore Other Quizzes by murfinator