This quiz is on the men in my five favourite Jane Austen books - "Pride and Prejudice", "Sense and Sensibility", "Emma", "Mansfield Park" and "Persuasion."

Quiz Answer Key and Fun Facts
1. How old is Mr Darcy in "Pride and Prejudice?"

"Such I was, from eight to eight and twenty; and such I might still have been but for you, dearest, loveliest Elizabeth!"
2. How many of the men in these five books are a member of the clergy or about to become one? (Ignore these background characters: Dr Grant, Mr Wentworth, Mr Norris.)

The five men are: Mr Collins ("Pride and Prejudice"), Edmund Bertram ("Mansfield Park"), Edward Ferrars ("Sense and Sensibility"), Mr Elton ("Emma") and Charles Hayter ("Persuasion"). Apart from the three above, no other clergymen are given a name.
3. How many men proposed more than once to the SAME woman in any of the 5 books?

The four men are Mr Darcy, Captain Wentworth, Robert Martin and Henry Crawford. Elizabeth rejects Darcy the first time but accepts the second. Anne accepts Captain Wentworth but is then persuaded to reject him until 8 years later when he proposes again.

Henry never succeeds with Fanny although he proposes lots of times. Robert Martin first proposes to Harriet in a letter. Emma persuades her to reject Robert, thinking that she can do better. However she accepts him after falling in love, and being rejected by, two other men in the same year.
4. Which of these is NOT the first name of any man mentioned in any of the five books?

Mr John Knightley in "Emma", Sir Lewis de Bourgh in "Pride and Prejudice" and Richard Musgrove, brother to the Miss Musgroves and was a sailor on Captain Wentworth's ship, "Persuasion."
5. In the five books, two men succeed due to the illness of the one they admire. One is Captain Benwick, (Louisa Musgrove in "Persuasion") the other is?

He and Marianne fall in love after Willougby jilts her for the rich Miss Grey and she suffers from a near death illness ("Sense and Sensibility.") Henry Crawford does not succeed with Fanny. Tom Bertram is himself sick. Mr Bingley admires Jane Bennet and at one point she is sick at Netherfield but they don't get together till a year later and it has nothing to do with her having been ill.
6. Henry Crawford ("Mansfield Park") was a man who loved making women love him. The first two times are a success but what is so special about the third?

Unlike Maria and Julia, Fanny is a worthy lover and Mr Crawford realises her true potential, "Fanny's beauty of face and figure, Fanny's graces of manner and goodness of heart." Fanny's heart softens towards him but he is not able to succeed due to her love for Edmund.
7. George Wickham ("Pride and Prejudice") is like many other villains. He nearly elopes with Miss Darcy and everyone believes he eloped with Lydia Bennet until they are found in London. What character actually does elope to Gretna Green?

Julia Bertram and Mr Yates elope just after the news about Maria and Henry Crawford, "Maria's guilt had induced Julia's folly." She fears the restraints that will be placed on her and so accepts Mr Yates. ("Mansfield Park")
8. George Wickham lived in sin with Lydia Bennet in London before he was persuaded by Mr Darcy to marry her. Is he the only man in the 5 books to live in sin with a woman (i.e. sleep together but not married.)

Henry Crawford does so with Maria Rushworth. This is even more scandalous than Mr Wickham as Maria is already married! ("Mansfield Park")
9. Mr Wickham stops admiring Elizabeth for Miss King, a woman who had just inherited Ł10,000. Which of these men also reject someone they admire for money?

Willoughby moves to London and begins an engagement with Miss Grey who has Ł50,000 after leaving Marianne heart-broken. Henry Crawford, although he loves Fanny, is tempted by Maria's charms, not her money. Mr Elton rejects Harriet Smith for Miss Hawkins.

However he had never admired Harriet and is offended to think that Emma thought that he did. Emma rejects him and he settles for someone with less money than her. Darcy is the opposite, he rejects money and a tie with Rosings Park for Elizabeth.
10. In each of the stories there is one man who is a villain or crass, one the deserving lover and then one or more good-natured gentlemen.

However, this doesn't mean all the books are the same! They are all different and unique.
11. Which gentlemen is this quote referring to: "he wore a blue coat and rode a black horse"? The description is made when the girls first catch sight of him.


Answer: To the army

Mr Weston, before he married Miss Taylor, was a Captain Weston in the militia. Jane Fairfax's father was Lt. Fairfax and his friend Colonel Campbell, who brought Jane up, were both in the army. There are no navy references at all.
14. Which of these men marries his cousin?

Charles marries Henrietta Musgrove, his cousin. Mr Darcy is destined for his cousin, Miss Anne de Bourgh but he does not love her. Instead he marries Elizabeth. Mr Knightley marries his sister-in-law's sister, Emma, and Mr Ferrars marries his brother-in-law's sister, Elinor.
15. Which of these men asks a women if she feels "a great inclination to seize such an opportunity of dancing the reel"?

This happens in "Pride and Prejudice" when Elizabeth is staying at Netherfield. Miss Bingley is playing a lively Scotch air.
Source: Author tayl0rina 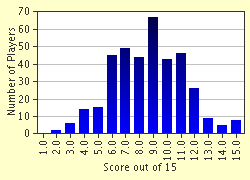 
Other Destinations
Explore Other Quizzes by tayl0rina