In many of her novels, Jane Austen sometimes turned plot lines by using the device of letter writing. Following are questions about some letters found in her major works. You only need to know who wrote each letter, and to whom. Have fun!

Quiz Answer Key and Fun Facts
1. Following is a portion of the first line in one of the most remembered letters in a Jane Austen novel. Do you know who wrote the letter, and to whom? "Be not alarmed, Madam, on receiving this letter, by the apprehension of its containing any repetition of those sentiments, or renewal of those offers, which were last night so disgusting to you...."

This is the letter Mr. Darcy wrote Lizzie the morning after she repelled his offer of marriage. In the letter he seeks to explain some of his conduct regarding his working to keep Bingley from Jane, and his history with Wickham.
2. This letter broke someone's heart. Who wrote it and to whom was it sent? "My Dear Madam, I have just had the honour of receiving your letter, for which I beg to return my sincere acknowledgments. I am much concerned to find there was anything in my behaviour last night that did not meet your approbation; and though I am quite at a loss to discover in what point I could be so unfortunate as to offend you, I entreat your forgiveness of what I can assure you to have been perfectly unintentional."

This is the letter which Willoughby sent to Marianne in reply to a letter she wrote him the day after their encounter at the ball in London. It confirms his inconstancy. It is not until Chapter 44 that the reader learns this letter had been dictated by Willoughby's fiancee and were not his words at all. Not that that excuses him!
3. This is the beginning of a letter written from friend to friend. Who wrote it and who was it addressed to? My Dear Harriet, You will laugh when you know where I am gone, and I cannot help laughing myself at your surprise tomorrow morning, as soon as I am missed."

Lydia left this letter for Mrs. Forster the night Lydia eloped from Brighton with Mr. Wickham.
4. This unwelcome letter was written by whom to who? "My Dear Sir, I feel myself called upon by our relationship, and my situation in life, to condole with you on the grievous affliction you are now suffering under, of which we were yesterday informed by a letter from Hertfordshire."

This letter from Mr. Collins to Mr. Bennet arrived a few days after the infamous elopement of Lydia with Mr. Wickham. Because Mr. Bennet was still in London searching for Lydia and Wickham, Jane opened and read the letter to the family. The letter concludes with Mr. Collins' advice to throw off Mr. Bennett's unworthy daughter from his affections and let her reap the benefits of her heinous offense.
5. Who wrote this beautiful love letter and to whom was it written? "I can listen no longer in silence. I must speak to you by such means as are within my reach. You pierce my soul. I am half agony, half hope. Tell me not that I am too late, that such precious feelings are gone for ever."

Perhaps the most beautiful love letter ever written, this is the letter Captain Wentworth left for Anne to find in "Persuasion". It had no salutation except what was written on the outside of the envelope: To Miss A.E. -- .
6. This is the first line of a very welcome letter! Who wrote it and to whom was it written? "Dear Sir, Being very sure I have long lost your affections, I have thought myself at liberty to bestow my own on another, and have no doubt of being as happy with him as I once used to think I might be with you; but I scorn to accept a hand while the heart was another's."

This is the letter Lucy Steele wrote to Edward Ferrars breaking off their engagement. It was a welcome letter, as Edward was not in love with her but felt duty bound to keep his promise to marry her. When Edward lost his fortune to his younger brother Robert because of his alliance with her, she turned her attentions to Robert. In the end, Lucy got the man with the fortune.
7. The following is a portion of a letter written under the guise of friendship as a design to create a breach. Which conniving character wrote this letter to which gentle, naive character? `When my brother left us yesterday, he imagined that the business which took him to London, might be concluded in three or four days, but as we are certain it cannot be so, and at the same time convinced that when Charles gets to town he will be in no hurry to leave it again, we have determined on following him thither, that he may not be obliged to spend his vacant hours in a comfortless hotel.

This is part of the letter written by Caroline Bingley to Jane Bennet. When Mr. Bingley left Netherfield for a short business trip to London, he expected to return. His sisters and Mr. Darcy conspired to join him there, in an effort to keep him in London, away from Jane.
8. This letter caused disappointment and sorrow. Who wrote it to whom? "Excuse me that I have not written before. Crawford told me that you were wishing to hear from me, but I found it impossible to write from London, and persuaded myself that you would understand my silence. Could I have sent a few happy lines, they should not have been wanting, but nothing of that nature was ever in my power. I am returned to Mansfield in a less assured state that when I left it. My hopes are much weaker. You are probably aware of this already. So very fond of you as Miss Crawford is, it is most natural that she should tell you enough of her own feelings to furnish a tolerable guess at mine. I will not be prevented, however, from making my own communication. Our confidences in you need not clash. I ask no questions. There is something soothing in the idea that we have the same friend, and that whatever unhappy differences of opinion may exist between us, we are united in our love of you."

This is the beginning of a very long letter from Edmund to Fanny while she was visiting her family in Portsmouth. In this letter he is still in love with Mary Crawford and has no idea the pain he occasions Fanny with this missive.
9. Which unworthy, estranged relative of a leading family wrote this letter to a friend? "Dear Smith, -- "I have received yours. Your kindness almost overpowers me. I wish nature had made such hearts as yours more common, but I have lived three-and-twenty years in the world, and have seen none like it. At present, believe me, I have no need of your services, being in cash again. Give me joy: I have got rid of Sir Walter and Miss. They are gone back to Kellynch, and almost made me swear to visit them this summer; but my first visit to Kellynch will be with a surveyor, to tell me how to bring it with best advantage to the hammer. The baronet, nevertheless, is not unlikely to marry again; he is quite fool enough. If he does, however, they will leave me in peace, which may be a decent equivalent for the reversion. He is worse than last year."

An old letter found by Mrs. Smith and produced to illustrate to Anne Elliot how little regard William Elliot held for the Baronet (Walter Elliot) and the Elliot name. The letter was written to Mrs. Smith's husband many years before and just happened to have been accidentally saved by Mr. Smith. Mrs. Smith found it in his personal papers after he died and showed it to Anne while they were both in Bath as proof of William Elliot's true character.
10. A sensible, gentlemanlike man wrote this letter to which of his relatives? "MY DEAR BROTHER, -- At last I am able to send you some tidings of my niece, and such as, upon the whole, I hope will give you satisfaction. Soon after you left me on Saturday, I was fortunate enough to find out in what part of London they were. The particulars I reserve till we meet: it is enough to know they are discovered. I have seen them both -- "

This letter, from Uncle Gardiner to Mr. Bennett, is the letter in which he advises Mr. Bennett that Lydia and Wickham have been discovered in London after their 'elopement'. He lets Mr. Bennett know that they are not married but that Wickham is willing to marry Lydia if Mr. Bennett assures that Lydia will be given her equal share of the Five Thousand Pounds which was her share of the inheritance after the decease of Mr. and Mrs. Bennett, plus 100 Pounds per year allowance during Mr. Bennett's lifetime. Due to his promise to Mr. Darcy, he does not let Mr. Bennett know that Mr. Darcy was at all involved in the discovery or the 'deal' made with Wickham. 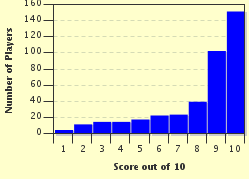 
Other Destinations
Explore Other Quizzes by Janeite